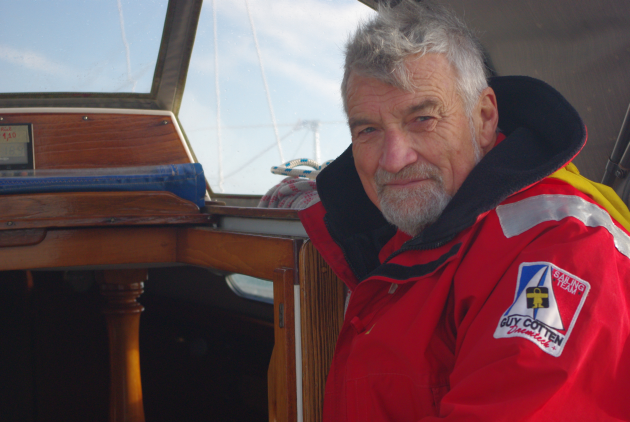 Paris December 8 2015: French solo yachtsman Jean-Luc van den Heede is the latest to throw his cap into the Golden Globe Race ring. He made the  announcement yesterday at the Paris Boat Show that he is to race a Rustler 36 yacht in  the 2018 circumnavigation event to commemorate the original Sunday Times Golden Globe Race.

The 70-year-old five-time circumnavigator already holds the record for the fastest solo west-about non-stop circumnavigation against the prevailing winds and currents, and has been a podium finisher in four previous solo round the world races:

Van den Heede says of the challenge ahead: “Back in 1968, I was 23 and fascinated by the Sunday Times Golden Globe Race. I followed French competitor Loïc Fougeron who was a friend.  I would have loved to have competed in the race myself but being a student, I was too young at that time without experience or money. Now, I have the experience and I find it easy to forget that I am one of the older entrants in this Race. So, thank you Don for coming up with the wonderful idea of staging a 50th anniversary re-run of the Golden Globe Race”

Background to the Golden Globe Race

Like the original Sunday Times event, the 2018 Golden Globe Race is very simple. Depart Falmouth, England on June 14th 2018 and sail solo, non-stop around the world via the five Great Capes, and return to Falmouth. Entrants are limited to use the same type of yachts and equipment that were available to Robin Knox-Johnston in the first Race.