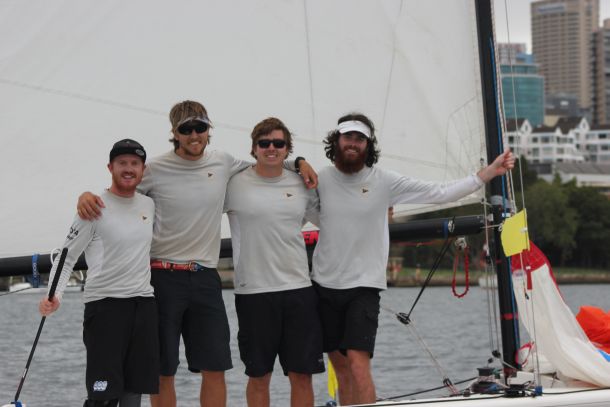 Just a couple of metres in the fifth and final race today decided the 2015 winner of the prestigious Hardy Cup on Sydney Harbour, a cross-nation duel between two of Australia’s outstanding young match racing skippers and their crews.

Today’s semi-finals and the dramatic final were sailed off the Royal Sydney Yacht Squadron at Kirribilli in light and flukey winds.

Then came the final: Griffin versus Gilmour, New South Wales versus Western Australia, and what a duel it proved to be.

Gilmour and his crew of Chris Smith, Adam Negri and Jack Breislin won the first match race. Griffin and his CYCA crew of Henry Kernot, Jack Dawson and Alex Chittendon levelled the scores with a win in match two and went ahead 2-1 after match three. Gilmour fought back to level the score 2-2 after match 4. Match 5 was the decider.

“Coming down the final leg to the finish we both ‘dialed up’, then went on different gybes looking for the better pressure,” Griffin explained later. “We chose to go left and were just ahead at the pin end of the finish line as he came powering into us…it was just a couple of metres at the finish.”

Griffin praised the boat handling skills of bowman Alex Chittendon, a late member of the crew, describing his efforts as a key factor in the Hardy Cup.

Jay Griffin is only the second CYCA Youth Academy member to win the Hardy Cup with Evan Walker winning twice, in 2008 and 2010. Griffin also crewed with Walker when finished second in 2014.

This year Walker coached the three CYCA teams contesting the Hardy Cup and next week Griffin, who is studying for a Masters degree in architecture, heads off to New Zealand to coach the two CYCA teams competing in international youth regattas in Auckland and Wellington.