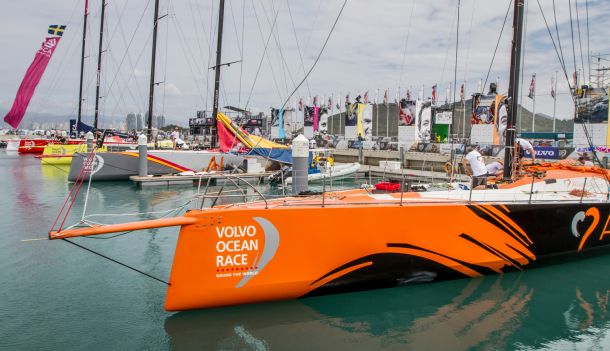 SANYA, China, February 5 – Volvo Ocean Race’s six-strong fleet heads out towards Auckland from Sanya for Leg 4 on Sunday with some big calls to make in the latest instalment of a marathon offshore contest which could hardly be more finely poised.

Charles Caudrelier’s (FRA) Dongfeng Race Team have their noses in front by a single point after the stage from Abu Dhabi to Sanya, but know that they could so easily follow the example of Team Brunel (Bouwe Bekking/NED), who could only muster fifth place on the leg to China after winning the previous one.

The Chinese team, which became the first from the world’s most populous nation to win a leg in the 41-year-old race last month, have yet to announce their crew plans for the 5,264-nautical mile trip to Auckland, New Zealand. These will be unveiled on Friday (February 6) and it will be fascinating to see how many changes they make to a crew which is performing so surprisingly well.

This stage promises to be as absorbing as anything that has proceeded it since the fleet left Alicante on October 11 on the first stage of the nine-leg, nine-month marathon around the world, culminating in Gothenburg, Sweden on June 27.

Rob Greenhalgh, the ultra-experienced watch captain of MAPFRE (GBR), sums up the challenges: “Historically, Leg 4 is a bit of a tricky one. A lot of upwind, a lot of reaching, quite a long leg as well. I imagine it will be quite close, certainly up until the Philippines. There’s a few options on routes to take beyond that. Tight reaching angles may see the boats separate a little bit.”

Most of the sailors agree that the Philippines will be a key staging post on a route that takes the boats through the South China Sea and into the Pacific, skirting past eastern Australia.

“Going in the right direction, beyond the Philippines, is key,” said Greenhalgh. “As you start cracking off and reaching, the boats which do the reaching angles fast will make a bit of a jump.”

Bekking, so determined to bury memories of his crew’s 'bloody hopeless' fifth place in the last leg and put Team Brunel back on track, agrees. “The key point will be at the top of the Philippines. You have to make a decision – how far north you go or how far east,” he said. “Maybe it doesn’t show straight away, it will only show up after one and a half or two weeks of sailing, but it will be quite critical over there.”

The 51-year-old Dutchman is looking forward to almost perfect sailing conditions from the outset on Sunday as the fleet sails off from Sanya. “It looks like a very good breeze leaving Sanya – maybe up to 25 to 30 knots – so that’s a bit different than three years ago when the guys were drifting around for a couple days,” he said. “That’s actually a bit uncomfortable, but at least we’ll make good mileage towards New Zealand so that’s a really good thing.”

Chris Nicholson (AUS) and several members of the Team Vestas Wind crew, whose boat was badly damaged on a reef in the Indian Ocean on November 29 during Leg 2, will watch the departure in Sanya.

The skipper from Lake Macquarie, New South Wales, reported on Thursday that Vestas Wind had arrived at the Persico yard in Bergamo, Italy, and the first stages of the rebuild were now underway with a hoped-for return to the race in June.

Meantime, the latest round of the In-Port Race Series – this one named the Team Vestas Wind In-Port Race – will be held on Saturday with Team SCA (Sam Davies/GBR) aiming to continue their good form following victory in Abu Dhabi.