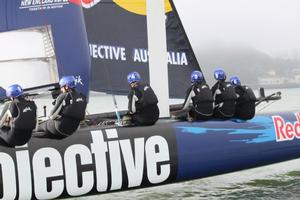 America’s Cup challenger SoftBank Team Japan added to their ranks by confirming that Olympic multihull sailor Jason Waterhouse will join the sailing team after racing in the 2016 Olympics in Rio De Janeiro, Brazil.

Representing his native Australian Sailing Team, 24-year-old Waterhouse is set to make his Olympic debut competing in the Nacra 17 mixed multihull event, a boat in which he currently holds the #1 ISAF world ranking.

“We are really excited to have Jason joining the sailing team at Softbank Team Japan,” said SoftBank Team Japan sailing director and tactician Chris Draper Draper regarding the acquisition. “Jason is not only an incredible sailor but also the perfect team player and will fit exceptionally smoothly into our team. He brings with him enormous enthusiasm, skills and hunger. It is fantastic for us to bring in someone at the top of the Olympic classes with fresh ideas and real race sharpness.”

The announcement follows trials earlier this year where the team had invited Waterhouse out for several sessions training on the team’s new AC45 Sport test boat in Bermuda.

“The whole team was enormously impressed with his great attitude and work ethic. His skills on the boat have been very impressive,” said Draper. “It is enormously important to the team that we ensure his focus is 100% about the Olympics in Rio for now and we will look forward to welcoming him in Bermuda full time after the games.”

Having already spent training on the water with SoftBank Team Japan, Waterhouse is looking forward to more time on the foiling, wing-sailed catamarans raced in the America’s Cup.

“I had my first taste of what the America’s Cup is when competing for Objective Australia in the Red Bull Youth Americas Cup,” said Waterhouse. “The first time on the AC45 test boat was a white-knuckle ride. You couldn’t wipe the smile off my face – I was so impressed with the boat and how the team sailed it.

“I’m really excited to be a part of SBTJ, the depth of experience within the team is enormous and I’m looking forward to working hard to help the team succeed. The culture of the team is very positive and you can feel that everyone is hungry to win which is an environment I feel is important and I enjoy being in.”

The 2016 Olympic Games in Rio are scheduled to take place August 5-21, 2016 after which Waterhouse will move to Bermuda full-time to sail with SoftBank Team Japan at their new base on the Great Sound. Waterhouse will be the first Australian sailor to bolster the team’s sailing ranks in preparation for the 35th America’s Cup.