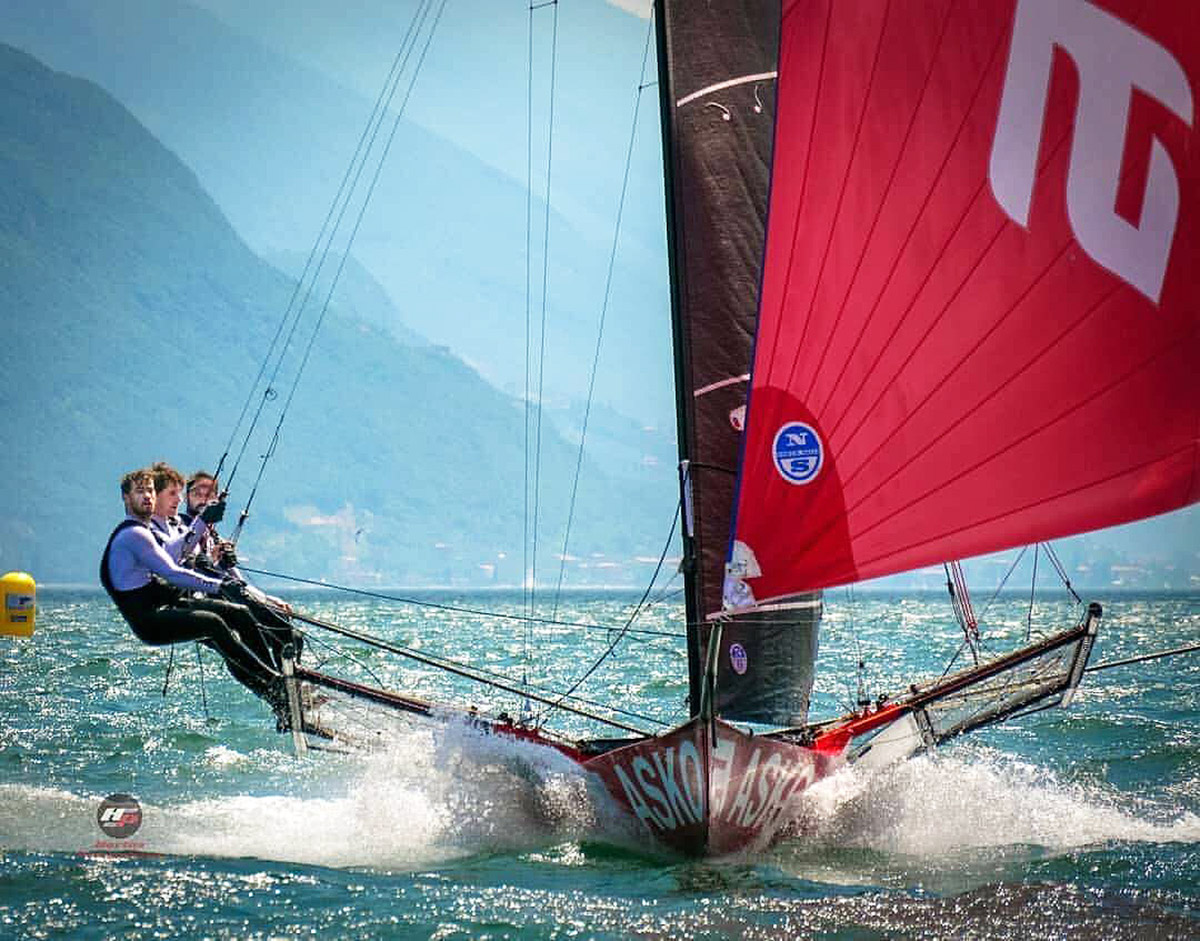 James Dorron and his Asko Appliances team of Paul Montague and Harry Bethwaite were Australia's top team going into the 2018 JJ Giltinan 18ft Skiff Championship last March, but the trio are determined to turn that performance into victory on Sydney Harbour in March 2019.

After the first two races of the new season, Team Asko Appliances look on target to figure prominently at the JJs with two outstanding exhibitions of boat speed and team work.

In Race 1 of the Spring Championship, Asko Appliances was leading when a mark rounding incident ruined the day, but last Sunday the team put that setback behind them with a totally dominating victory in Race 2 of the Championship.

Dorron is a former two-time winner (and the youngest) of the Australian 16 Footer Championship, who joined the 18s in 2013 as skipper of Mojo Wine.

Consistently at the 'pointy-end' of the fleet, Dorron’s work commitments resulted in him taking a year off in the 2016-2017 season.

The lure of sailing an 18 full time, and the determination to win a major championship, led the high-achieving Dorron back into the 18’s as a skipper in 2017-2018 season.

With the retirement of Marcus Ashley-Jones, the opportunity came up for Dorron to take the tiller of the Asko Appliances-sponsored skiff, and he grabbed it with high expectations.

He assembled a quality team of experience and youth in (Paul 'Monty' Montague and Harry Bethwaite respectively, and the trio went into 2017-2018 full of confidence.

Despite showing glimpses of boat speed, the Asko Appliances team suffered from a succession of mishaps and gear failures, and the campaign was going south during the first half of the season.

The usually upbeat and confident Dorron was beginning to show signs of disappointment as the Australian 18 Footers League fleet went into recess over the Christmas and New Year period.

“We got the old Channel 7 boat, which was a great platform, but a lot of items were starting to wear or fail.”

“Some bad luck and some poor boat maintenance on my part, together with a bit of rust with me getting back on the tiller, didn't help.”

Dorron is being a little too hard on himself, but like all sporting champions, once the major championships began in the early months of 2018, Asko Appliances began to show the real quality of the team and the third placing at the Giltinan Championship was the result.

He explained: “We did many upgrades and replaced a whole heap of items on the boat to make it more reliable.”

“I owe a lot to Paul and Harry, who did a lot on the boat, and spent many late nights throughout the year.”

“After so much time spent on and off the water, we came into the JJs hoping for a top three.

“We finished a respectable third, which was pleasing, but we know we could have done better.”

With Dorron's determination to win a major 18ft skiff championship, he put together a team and headed off to Italy, where Asko Appliances won the Mark Foy Trophy Championship on Lake Garda.

“With Monty (Montague) unable to commit to the series, I approached Trent Barnabas and he was keen to do the regatta.”

“It was a pleasure sailing with Trent and Harry. They're very experienced and kept the boat powering along all week.

“It was a fabulous venue in Italy, and to some away with a title was a great achievement for all of us.”

Barnabas and Bethwaite are not only champion sailors in the 18s, but also the off-spring of two of 18ft skiff racing's most famous champions.

Dorron's focus is now definitely on the 2019 JJs: “With another year under our belts, we would love to be back in the top group.

“Monty, Harry and I are back this year with a bit more experience, and the boat’s in good shape. It's up to us now to keep it that way.

“It would be great to bag one of the big championships for the long time sponsors, Asko Appliances, who have been such great supporters of the 18s.”

Team Asko Appliances will face the next challenge this Sunday when the fleet lines up for Race 1 of the Australian 18 Footers League Club Championship, which will be sailed over one of the courses to be used at the 2019 JJ Giltinan Championship in March.