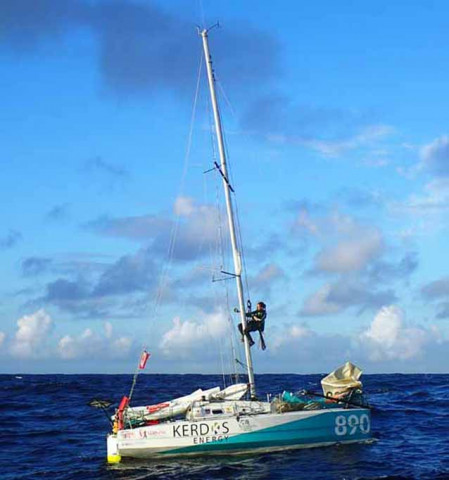 The wait in Le Marin (Martinique) for the first competitor to complete the Mini-Transat La Boulangère is about to enter its final day. François Jambou is expected to make landfall tomorrow (from 18:00 UTC). Indeed, barring calamity, he’s set to take the win in the prototype category after a very fast race and a little over 12 days at sea.

Axel Tréhin looks set to hold onto his 2nd place, whilst German sailor Morten Bogacki and Erwan Le Méné are duelling for the last remaining podium place in this second leg. In the production boat category, Italian Ambrogio Beccaria continues to reign supreme free of any threat and is due to cross the finish line on Friday (from 16:00 UTC).

Everything’s in place in Le Marin to welcome the sailors in style as they complete the second leg of the Mini-Transat La Boulangère, having sailed a remarkable race across the Atlantic, singlehanded on the smallest offshore racing boats in the world.

The front runners closing on Martinique, the back runners at the midway mark!

From the front to the back of the fleet, the festivities are sure to continue as each of the skippers make landfall, share their stories from the high seas, savour a job well done and make the most of the bikini climes of the Caribbean and the gathering of Mini soulmates. And though the first skippers are reckoning on an imminent arrival, the back runners still have a long way to go. Indeed, Georges Kick (529) and Jean Lorre (570) are only at the midway mark this evening, progressing slowly… but surely.

Aboard the reigning champion prototype, François Jambou (865) moved up into the head of the fleet 48 hours after the start in Las Palmas de Gran Canaria. Since then he has been opening up a seemingly inexorable lead over his main rivals: Axel Tréhin (945), Erwan Le Méné (800) and Tanguy Bouroullec (969). According to the latest routing (to be taken with a pinch of salt as ever of course), François could well cross the finish line from 18:00 UTC, or 14:00 hours in Martinique this Thursday.

A fifth sailor has also joined the fray now. In fact, after finishing 11th in the first leg, Morten Bogacki (934) is sailing a very fine race in the second leg too. Now less than 500 miles from the finish, Morten is on the provisional podium, neck and neck with Erwan Le Méné. Indeed, the German sailor has really got to grips with his very fine prototype, a boat that compatriot Jörg Riechers secured 2nd place on in the Mini-Transat La Boulangère in 2017. Among the stellar performances of note in this particular fleet are that of Spaniard Pep Costa (431), who’s sailing one of this year’s oldest prototypes, launched back in 2003. In the space of three days, he’s gained six places, moving up from 15th to 9th place and will doubtless be ecstatic to learn he’s inside the Top 10.

Since the start of the second leg, Ambrogio Beccaria (943) has been leading at every position report, barring one exception (on 3 November at 03:00 UTC)! Suffice to say that the Italian skipper has stamped his mark on this race with impressive authority to relegate some very honed rivals a long way astern. He could well make Le Marin on Friday at around 16:00 UTC to complete the double with a win in both legs. Behind him, the 2nd and 3rd spots are still very much up for grabs and will likely go to the wire.

This evening, Benjamin Ferré (902) and Nicolas d’Estais (905) are hanging on in there, but it’s still absolutely all to play for given how tightly bunched they are with 450 miles to go. Either way, as the finishers begin to flood across the line, it’ll be time to get out the calculators and work out the state of play in the overall ranking for this 22nd edition of the Mini-Transat La Boulangère in the production boat fleet.

Finally, it’s worth noting that Anne Beaugé (890) scaled her mast today and repaired her damaged spreader without assistance so she is now back out on the racetrack. The two sailors who dismasted, Russian Irina Gracheva (579) and Julien Berthélémé (742), are continuing to make headway towards the finish line, the latter skipper’s jury rig proving to be particularly effective. No longer officially racing after requesting assistance, Briton Joe Lacey is also gradually closing on Martinique on a course along the great circle route.