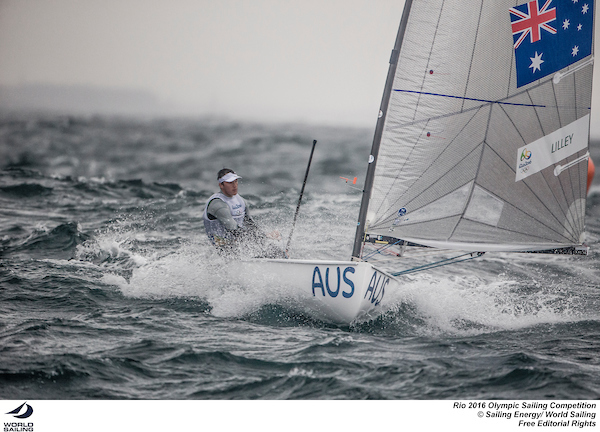 Jake Liley (AUS) had an awful start to the Rio 2016 regatta with a 16th and a UFD which became his discard. But since then he has put together a great scorecard of 8,6,6,3,3 before another excellent day today whe he finished in third and fifth.

The result of this consistency is that he sits in third position, well behind the run-away leader Giles Scott of Great Britain, who looks certain to take Gold, but only nine points behind Vasilij Zbogar of Slovenia. The major danger to a medal will come from PJ Postma (NED) and Ivan Gaspic (CRO) who are six points behind Lilley.

It was another good day for the big man Scott. He has just two scores in double figures and all the rest are top three. Today he added a bullet and a third to sit on 22 points.

Postma won the other race today but he has been very inconsistent – either top five or in double figures.

Lilley was his usual pragmatic self when I spoke to him after the eighth race. He refused to be drawn on his medal prospects, saying with a straight face that he was still taking it one race at a time. “Lots of the dudes have high scores including me so I just have to keep to the game plan.”

He described the conditions as completely different to the Thursday when they last raced. Today it was flat seas and 8 to 10 knots instead of 3 metre swells and 15 to 20 knots.

The Finns race their final two qualifiers tomorrow, followed by a rest day and then the medal race on Tuesday.