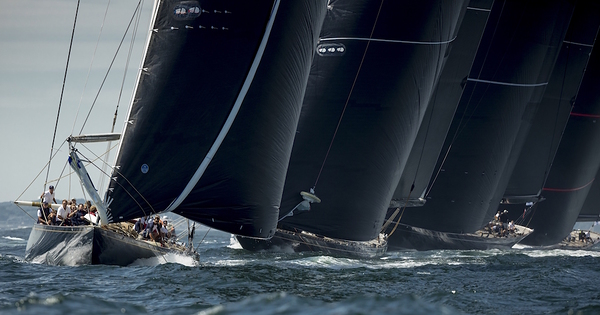 30/08/2017
August 29, 2017 (Newport, RI) – Following the success of the first ever J Class overall season championship, the inaugural 2017 Kohler Cup, the J Class Association and North Sails are proud to announce the 2018 Kohler Cup schedule. The 2018 Cup will be comprised of a total of four events as opposed to just three in 2017. The other notable difference is for the upcoming year events will be weighted equally, with boats that take part in all four events able to discard their worst result.
The Kohler Cup is a perpetual trophy named in memory of Terry Kohler, the former owner of North Sails, who was also an entrepreneur and philanthropist. The inaugural Kohler Cup was presented to Lionheart during prizegiving for the J Class Worlds in Newport, Rhode Island. The trophy has certainly played a part in developing the J Class fleet, with at least six boats at key events.

Louise Morton, J Class Association Secretary, commented: “With six yachts on the start line last week, there is no doubt that the J Class fleet is enjoying an unprecedented resurgence. It is a testament to the owners of these yachts, the competitiveness of the fleet, and the professionalism of the crew, that going into this event the top three boats were only separated by one point. However, with the J Class Worlds worth double points, everything was at play in Newport.”

The Kohler Cup is the first ever season-long points championship for the fleet, aimed at promoting and enhancing the racing for the celebrated world-class fleet of J Class yachts.

The 2018 season will consist of the following events:

Ken Read, President of North Sails and Skipper of Hanuman commented: “The Kohler Cup is here to stay, as it is clear that the J Class owners want to stick together from event to event which provides amazing racing. The World Championship was the perfect end to the year. I am delighted that North Sails has also been able to play a part in keeping these boats together over the season through the trophy. I feel this year was unique in that regard and I can't wait to start it all again next year with even more events and hopefully even greater racing.”
The Kohler Cup Scoring System: