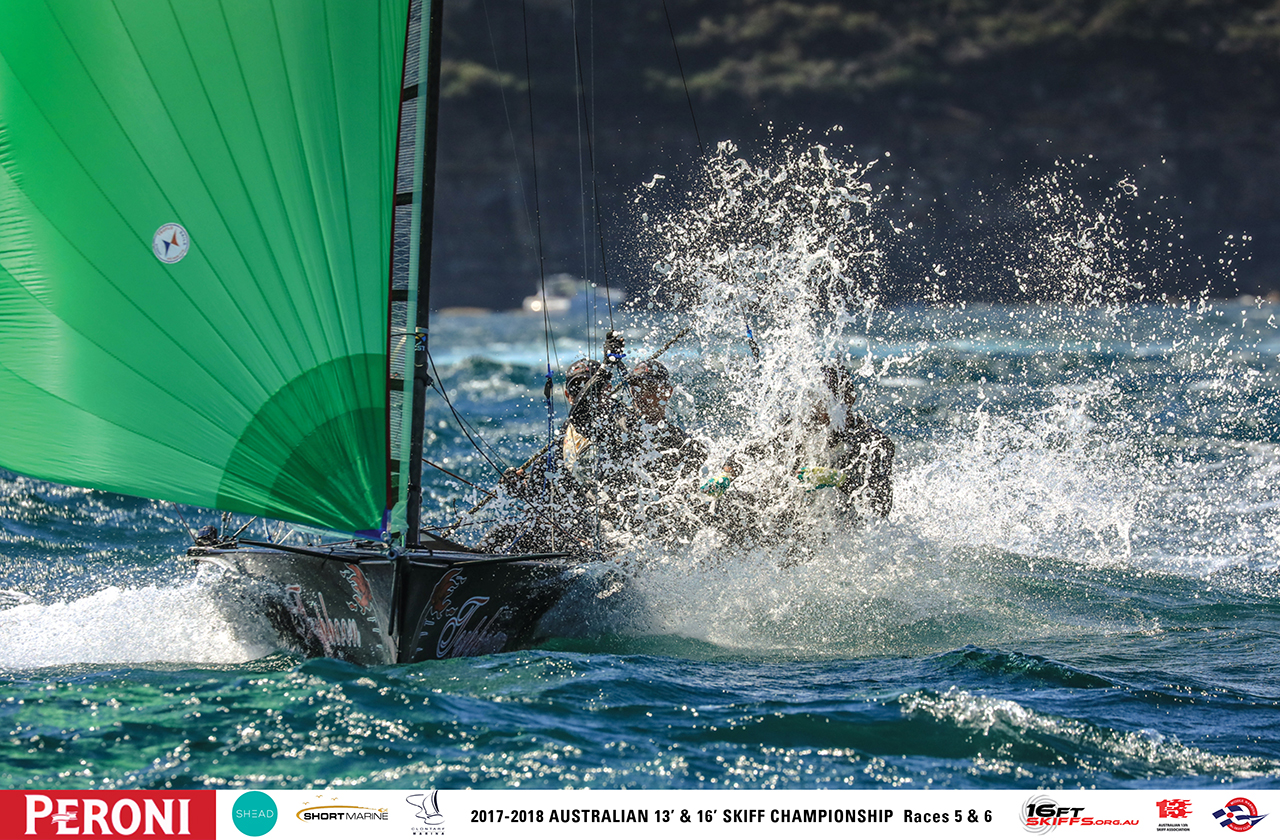 Races 5 & 6 proved pivotal in the make-up of the final show down for the battle for the Peroni 16 and 13 foot Skiff Australian Titles. Just like the old days when the milkman delivered your bottles to the door the cream was always at the top. No different here as it is three-way split on who will win the grand prize.

As reported yesterday the collective skiff community resurrected the destroyed Manly Surf n Slide’s rig, installed a new skipper Ben Bianco and with the experienced crew they took their boat back into contention. The awesome photos from legendary snapster, Michael Chittenden, display Ben’s tenancy to keep the dream alive as the injured Joe Turner looked on from the support rib.

However the fleet had to play dodgem cars with a combination of North and South bound ferries blasting their horns for commercial right of way; add in the Captain Cook tourist ferry it made for some mayhem. Luckily no carnage today, that said there were some close calls.

Race 5 saw the three favourites forge to the lead in the same conditions we have seen throughout the regatta. 15 knots; short chop and those who wanted hero status selecting their big rigs. The breeze swung to the North East making the downhill angle much easier allowing the forward hands to really drive the spinnakers to maximum power.

Race 5 had Daniel Turners Sutech pipping Lee Knapton’s Brydens by mere 30 seconds with the before mentioned Manly Surf n Slide just 13 seconds to take a third. With the 13’s in close pursuit it was Carlton Smith aboard Mighty-Mite who got the gun followed by Daniel Bromelow’s Bartley Constructions less than 60 seconds behind.

Race 6 was ground hog day with exactly the same conditions. Those who chose the left side of the course again it paid, those who were forced right were in a world of pain. Again the 13ths showed a clean pair of heals with ‘Mighty Mite’ upstaging many of the 16’s with just raw uphill speed and with the downhill angle in their favour the young bucks showed the old bulls how to make the best of the gusty conditions.

Bottom line, as the results show, and as Mike McMahon the official ‘results officer’ dissected the spreadsheet, there is a three-way split for the title Sutech, Manly Surf n Slide and the ever lurking Brydens. In the 13’s its Mighty-Mite leads pursued by Bartley Constructions and Bigfoot – again it will be the final race that will produce the champion. With 40 plus degrees in temperature predicted for the day the heat will be well and truly in the kitchen.