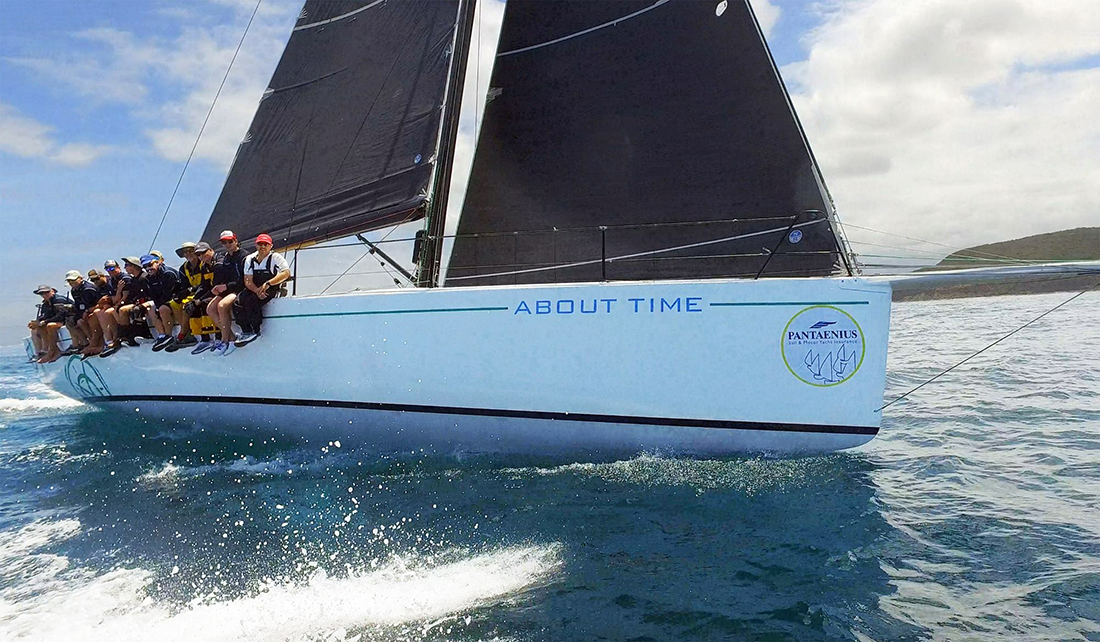 At 77, Lake Macquarie skipper Doug Coulter has no intention of slowing down over the Christmas-New Year break – if anything, his yachts are getting faster with advancing years, and he’s hoping to again vie for line-honours in the Pantaenius Newport-Coffs Coast yacht race starting December 27.

Coulter’s Belmont-based Roger 46, Shakti, had a classic match-racing duel with the Cookson 50 About Time last year, gaining a handy lead at the mid-point of the race until being edged in the latter stages. Shakti nevertheless salved its wounds with PHS honours.

“It was on the nose all the way, so lots of tacks and tactics,” Coulter recalls. “It was a bit tough on the body, but you never know if it’s the race or the liver that you gave a hiding. It’s not as easy as it used to be.”

Coulter sailed his first Coffs race in 1984 aboard the Farr two-tonner Fiona, a handsome ex-IOR racer that’s now living in retirement in the Whitsundays. He also competed in his Farr 40 Short Circuit, and the Sayer 40, Frantic, in 1998.

“I used to go to Hobart regularly before getting a bit long in the tooth, and for a while I didn’t own a boat that was suitable for mid-length coastal racing. The bug then bit me again, so I bought Shakti in the UK … and the rest is history.

“In last year’s race we hit the lead around Seal Rocks because About Time took a dig out to sea that didn’t pay off. They finally got us around Nambucca Heads and beat us across the line by about 12 minutes.”

A potential barrier this year is the shallowness of Swansea Channel, an ongoing curse for deep-draft racing yachts on the Lake, however Coulter will be moving hell and high water to make the start. His crew enjoys the challenge of top-level ocean race while Coulter likes the length of the race, at 230 nautical miles.

“For a fast boat like ours, it takes around 25 to 30 hours, which really suits those of us who aren’t keen on the long ocean slog. You work hard but I enjoy the challenge and I’ve got a great crew who enjoy it as well.”

As for his chances, Coulter says southerly conditions would give the Rogers 46 its best shot: “Upwind it’s just another 46-footer, but downwind, when it gets planing, it really sails beyond its handicap.”

About Time owner Julian Farren-Price also has unfinished business, despite clawing back the lead in the 2017 Pantaenius Newport-Coffs Coast to finish in 1 day 16 hours.

“It’s a very tactical race and we completely blew it on the first night last year, which is one of the reasons I want to come back this year,” Farren-Price says. “Last year we slipped 10 or 11 miles behind Shakti, and all we could do then was aim for line honours rather than a handicap win.

“I didn’t even think that was possible, but my crew is very determined and chipped away – a good effort, though we should never have been that far behind.”

Farren-Price has done 10 or more Coffs races in previous incarnations of About Time, enjoying considerable success.

“It’s a very famous race on the east coast, and the timing and length suits me really well,” he says.

“Getting the currents and wind right is tricky – we went offshore last year because we had a forecast predicting breeze but ended up slipping back. I’ve pretty much decided now to hug the shore now and tack when the depth sounder tells us to.”

A further tactical decision for skippers is whether to power through with crew on the rail the whole way, or run regular watches on board. Farren-Price prefers the latter, allowing his team to be well rested and fully functioning in the crucial finishing stages.

Another bonus was the quick and easy delivery back to Pittwater, which gave the well-known timepiece and jewellery retailer the chance to spend New Year’s Eve with his family and relax at home before returning to work.

This year, Farren-Price intends staying on to have a hit at the renowned Bonville Golf Club, which is hosting the Coffs Race Golf Challenge on January 31.

“Obviously Coffs Harbour is a great destination to go to as well,” he adds. “The locals are always friendly, and I hear there might be a golf game this year which suits me right down to the ground – my two sports are sailing and golf.

“I’ve never played at Bonville, but I’ve heard great things about it.”

The Pantaenius Newport-Coffs Coast race is run by Royal Motor Yacht Club Broken Bay in association with the Coffs Harbour Yacht Club under Safety Category 3 Plus. Entry divisions include PHS, ORCi and IRC. Multihulls and short-handed crews are also welcome to compete.