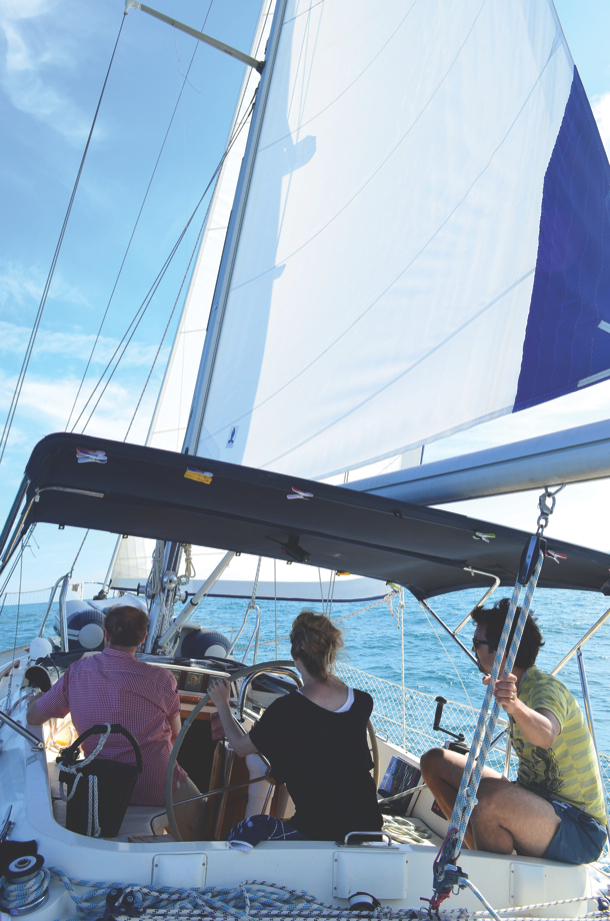 We secretly dreamt of the prestigious Nordic brands when we first sold up and left Sydney for Europe in search for a safe and comfortable blue water cruiser.

Our hopes were set on our budget miraculously tripling or a Hallberg-Rassy being for sale for a bargain through unique and undefined circumstances. None of this happened.

Instead, something better did.

On our journey towards boat ownership we visited innumerable Mediterranean ports.

One day in France, we had just viewed boat number 54, slight disheartenment had begun to creep in. Mould and rust infested vessels, which were incomparable to advertised online pictures, had been the norm. Disappointedly, we stepped off another discarded Amel Maramou when Pablo, by accident, sighted a ‘for sale’ sign on a sturdy looking centre cockpit. Luck had it that the broker we were dealing with was able to show us this Moody 425.

That first one did not end up being ours. Her asking price and imminent teak deck replacement expanded well and truly beyond the boundaries of our AU$100,000 total budget. However, it narrowed our search down to one of the 116 Moody 425s built in Plymouth between August, 1988 and July, 1991. We knew this was our kind of boat.

Several other Moody models we had seen in Australia had not caught our fancy enough to put this well-established English ocean cruiser brand onto our lists.

However, this product of Marine Projects did not only tick all our boxes: from centre cockpit for increased safety to easy single handling and comfortable living; it also added the notion of being able to have a spare cabin on board and a total of nine bunks, if needed.

Prior to this encounter of destiny we had not dared dream that we would be able to offer any visitors the luxury of their own cabin, let alone an en-suite, within the 40 foot range. However, Bill Dixon Moody designer per excellence since 1981, has been using space so remarkably well that no square inch remains unexploited.

The Moody 425 is a direct development of the Moody 422. The main difference is the en-suite heads to the aft cabin which can also be accessed from the galley; thus giving two accesses to the owner’s cabin.

The other passageway is a walk-through including two bunk berths, which can be closed off to form a separate cabin.

The galley to port, aft of the saloon, is adjacent to the main companionway.

Its L-shape, design and numerous safety features make it a safe and comfortable place to cook on two burner stoves with oven and grill, even in rough seas.

The forepeak holds two berths. Its en-suite heads to starboard is also fully fitted out with a marine WC, washbasin and hot and cold shower.

In-mast furling mainsail and furling headsail are standard and so is the skeg-hung rudder. There is a shoal and fin keel variation.

Fuel tank capacity is 273 litres, whilst the two water-tanks combined hold just over 400 litres. The lengthened stepped transom incorporates our scuba gear lockers, in addition to an invaluable outdoor shower.

Built in 1989, Happy Dancer had gone through Italian and German hands following her first two English owners. All four of which are known to us.

We know of her journey into the Med about a decade ago; about the unlived dreams of the Italian owners who now are living their cruising voyage precariously through our blog; and finally about the love story which made her latest owner jump boats onto his sailor lady’s cat. With us, Happy Dancer has continued to cruise the Greek islands, Italy, Turkey, Malta. She is currently being revamped, upgraded and pampered in preparation for an impending Atlantic crossing. The old lady looks well overall and upgrades are limited to adding a wind vane, refurbishing some hatches, renewing the standing rigging in line with insurance’s request for replacement every ten years or so and usual maintenance and servicing of engine, winches, windlass and the like.

A small yet efficient 30l water-maker, solar panels, wind generator, auto pilot, VHF and HF radios, radar and comfortably oversized dinghy had all been part of our original purchase inventory.

Initial engine problems were mainly due to a wrongly fitted impeller. This had led to a worrying few days during our first weeks on board. In hindsight, however, it catapulted our engine knowledge and understanding from close to zero into the well and comfortable cruising range as we had to take the whole thing apart and put it back together again.

One thing we had to promise the previous owner was to keep the engine’s name, Friedhelm. We took it even further and went on naming all machines on board, such as Clara the water-maker, Ebby the Eberspacher heater and Pepe the dinghy outboard.

We also kept the name of the boat. Not because we absolutely loved it, but because we did not want to remove the mast just to replace the coin underneath. We did not have the guts to challenge this superstitious seafaring tradition. We realised since, the name makes people laugh. Not sure why, but it does. It is a deviance from her original name, Blue Dancer. The second owner thought it to be too close to the blues, as revealed by thoroughly kept and updated log and maintenance books, emails, receipts and other kinds of priceless insights into her past.

Another forte of owning a Moody is the Moody Owner’s Association which brings together almost 2000 Moody owners and half of all ‘Moodies’ ever built.

Through a comprehensive and easily accessible online platform, members can exchange information and seek advice on anything from technical tips and tricks, detailed Moody plans and drawings, to destinations and Moody gatherings around the world.

When something breaks or needs upgrading, such experienced based assistance from other Moody owners, readily available at the click of a mouse, is an invaluable add-on.

In summary, we have found our Moody to offer great value at an affordable price. It is not only a high end brand, but delivers extremely well in many aspects of boat ownership, including excellent sailing ability in both light winds and gales; comfortable cabin lay out; brand reputation and support; and stable resale value.

Selling her is not in the cards for the moment, but having put substantial amounts of our savings into the boat, the latter further enhances our peace of mind.