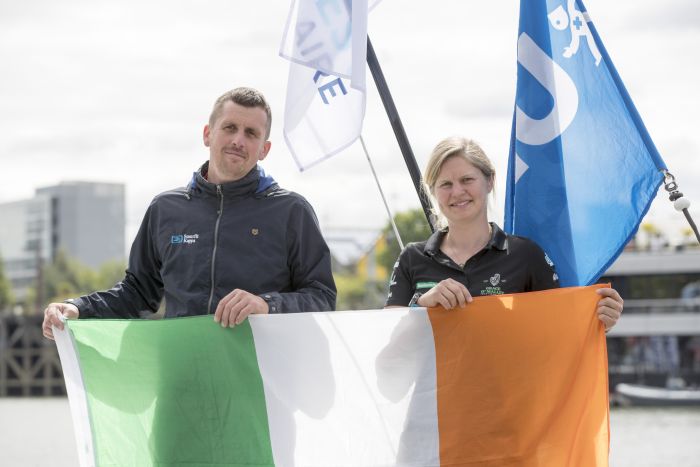 Rather than any accumulated local knowledge it will be the strong, primal lure of returning to the homeland, Ireland, which might yield any additional speed advantage to Joan Mulloy and Tom Dolan when the two Irish solo racers compete on the 550 nautical miles La Solitaire URGO Le Figaro opening leg from Nantes in France to Kinsale starting Sunday.

Both of the Irish sailors have done most of their solo racing and training in France during their sailing careers and actually probably concede any extra knowledge of the Celtic Sea to some of their French counterparts, some of whom will have raced into Kinsale as much as a dozen times before.

This will be the second year of participation in La Solitaire for both Dolan, 32, the skipper of Smurfit Kappa who was brought up in a farm in Kells, County Meath and Mulloy, 33, skipper of Believe in Grace/Businesspost.ie from Westport, County Mayo in the west of Ireland. And, after the stress and pressure of competing for the ‘bizuth’ or top rookie prize, both are pleased to be unshackled from the high expectations and ready to take on the four stage race with an open mind, keen to learn as much as possible over the coming month of racing, before the final stage finishes in Dieppe at the end of the month.

“I am surprisingly calm considering the start is Sunday but the boat is in good shape and everything is in place. As for me I have not had the training and preparation I had planned but I knew that would be the case a few months ago and so I take it as it is and just know that I will compete with every last fibre of my being to do as well as I can. I have such a great story with my sponsors Grace O’Malley and as soon as I knew I could do the race with them. I am so lucky to be here.” Mulloy smiles on the dock in Nantes on the Loire river at three days before the start.

“The fleet is wide open with this new boat. I have just done the one race solo and only a couple of weeks solo training so it is important I approach this with the right mental approach and make progress. I won’t accept anything less from myself that trying to compete in the fleet.”

Mulloy raced one of the preliminary two handed races, the Sardinha Cup, with four times Vendée Globe round the world racer Mike Golding.

“Mike was great. I learned so much from his unflappable approach, some of that comes with experience but also from the logical way he approached some of the manoeuvres and processes, he made it sound simple and when we came to do things that worked, but also he sat back and allowed be to back myself and my decisions and that gave me much more confidence in myself.

Dolan finished third rookie in the French Solo offshore championship last year and has had a solid preparation and build up, sailing the two handed warm up races with top Irish round the world racer Damian Foxall. He and Foxall finished 14th in the Sardinha Cup, fifth on the last leg, then 24th in the Solo Maitre Coq including a sixth on a short solo inshore. In both races he underlined that his nickname L’Irlandais Volant, the Flying Irishman, is as appropriate in the Figaro Beneteau 3 as it was in the Mini 650.

“I still have the speed and I am happy about that. The new boat has much more of the feel of the mini in the way you sail it and the feel and in the manoeuvres. I think I have had a good feel for speed since sailing Hobie cats and that has just carried on. There are one or two secrets I can’t tell you about!” Dolan quips. “In truth I am tired before the start but I think everyone is. I have to make that a positive and use that to really find the rhythm early on.

“It has been a long process prepping the boats and training and racing and then coming into the race. But I am very lucky. There is none of the pressure of the rookie thing last year, I know I am very lucky having Smurfit Kappa for three years and so there is no additional pressure other than my natural competitiveness.” Dolan adds, “But this is a long race. Four long legs. The first one is the home stop and I will be right up for doing the best I can. But I don’t have any special knowledge of the area.

“The crazy thing is I can remember only ten years ago being out at the Fastnet when I worked at the sailing school in Baltimore and seeing the Figaro racers out there then. Some of these guys are still racing or are back this time. I guess maybe that is where the dream started. But back then I never thought I would be here ten years on racing into Kinsale on La Solitaire. That is crazy, isn’t it?”