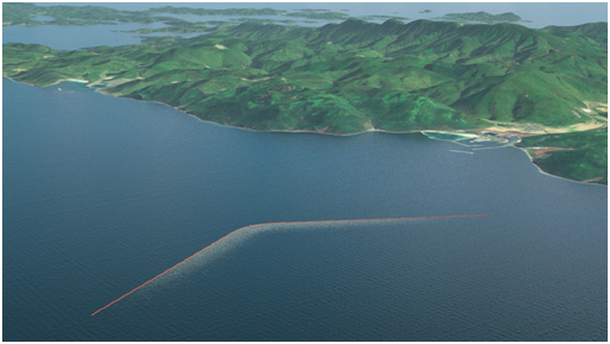 Last September, The Ocean Cleanup deployed System 001 into the Great Pacific Garbage Patch – marking the first-ever attempt to start cleaning it up. During the campaign, it was found that the system did not maintain a sufficient speed, allowing plastic to exit the system. Additionally, a stress concentration caused a fatigue fracture in the HDPE floater.

The team has come up with solutions and could start testing them in the Great Pacific Garbage Patch in June. The main improvement of the structural design was to simplify the HDPE pipe and allow minimal fluctuations in the wall thickness.

Slat says he will test two options that will either speed up the system or slow it down. He explained the options in a blog:

1. Inflatable buoys – one idea was to add a sail to increase the windage of the system, but the loads from a sail would be too great during storms – approximately five tons of force for every meter of sail. The force would cause the system to topple over, resulting in complicated structures to keep it upright. This option was, therefore, not feasible. However, this thinking did lead us to the idea of disconnecting the sail from the floater and let the sails float freely. To test this idea, we will trial giant inflatable buoys on the front of the system which will tow the system forward, propelled by the force of the wind.

2. Sea anchor – an alternative option, should the buoys prove ineffective at speeding up the system, is to attach a massive 20-meter-diameter parachute-like sea anchor, which will turn the system around and, in theory, maintain a slower speed than the plastic. Rather than attempting to go faster than the plastic, this option brings the speed close to the speed of the water, making use of the observation that the plastic can travel substantially faster than the water current.

“The basic principle behind the iterative design process is to test, learn, and repeat until you have a proven concept,” says Slat. “We do not know with certainty that these proposed options will solve the issues we have encountered. In fact, there may still be further unknowns, as is the nature when doing something that has never been done before. What we do know, is that every day we are not yet operational the plastic pollution problem is not getting better.”

To facilitate iterative testing, Slat is reducing the size of the system by a factor of three. This will speed up the procurement and assembly processes, as well as the tow. The design will be much more modular as well so that changes can be made without returning to shore.

“We expect these next few months to be exciting and informative for The Ocean Cleanup.”