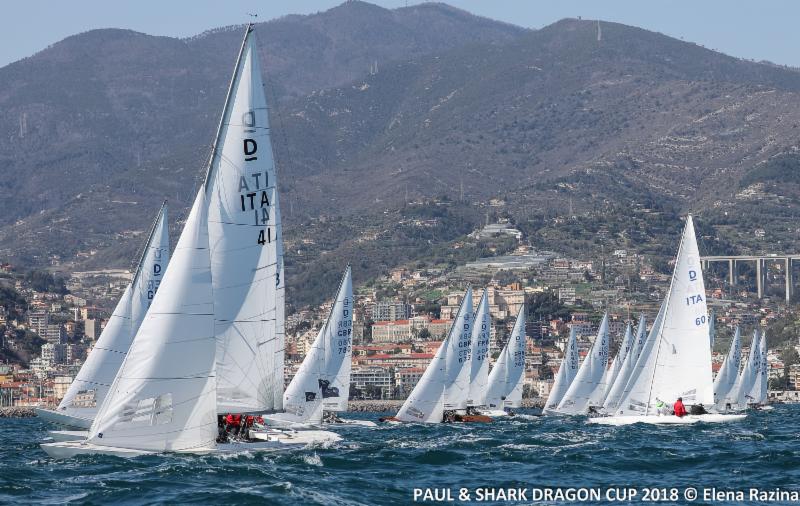 Sanremo, on the Italian Riviera, has long been a popular venue for the Dragon fleet. The club has a reputation for delivering stylish events and top flight competition and is pulling out all the stops for this unique celebration.

The Dragon 90th Anniversary Regatta will take place from 5 to 13 October 2019 and will combine an innovative racing program and some memorable parties.

With five months to go, 130 entries from 26 nations and four continents have already registered, and this number is expected to grow as the event approaches. Alongside the modern Dragons, a large fleet of Classics is expected.

Don Street has entered IRL15, which at 78 years old is thought to be the oldest Dragon still racing. She will go up against other historic Dragons including ESP1 owned by German Gill-Mendoza March, GER16 owned by Dr Dirk Pramann and Vittorio Boccolini’s EPS2.

International Dragon Association (IDA) Chairman Vasily Senatorov looks forward to the regatta, saying; “I invite all Dragon sailors and friends from around the globe to attend our 90th Anniversary Regatta and help us celebrate. The IDA, the Yacht Club Sanremo and our sponsor partners are creating an event that will live in our memories forever, and we want all our friends to join us.”

The boat was designed by Johan Anker in 1929 for a competition being run by the Royal Yacht Club of Gothenburg to find a new two berth weekend cruiser suitable for sailing the islands and fjords of Scandinavia. The design not only won the competition, but rapidly gained popularity thanks to her beautiful lines and sailing performance.

In 1933, AH Ball of the Royal Clyde Yacht Club, saw a Dragon while cruising in Scandinavia and fell in love with the design. He obtained a set of plans and persuaded the Clyde clubs, which were looking for a small boat to replace the large and expensive pre-first world war classes, to adopt the class.

The first six British Dragons were built by McGruer’s at Clynder at a cost of £220 apiece. The success of the class was immediate and in 1936 the Clyde Yacht Club’s Conference presented a new trophy for international competition called the Gold Cup, which remains the Dragon’s most coveted annual trophy to this day.

As her international following grew, the Dragon was adopted as an Olympic Class for the 1948 London/Torquay Games and she remained an Olympic class until the Munich/Kiel Games of 1972. For some classes, deselection for the Olympics sounds a death knell, but for the Dragon is was to be the start of a new era of even greater success.

The IDA has always had the foresight to encompass change whilst fiercely protecting its essential one design philosophy. There have been many changes over the years that have kept the class current, but perhaps the biggest of these was the transition to fibreglass construction.

Børressen of Denmark had built large numbers of successful wooden Dragons and Børge Børressen, who won the Dragon Gold Cup for Denmark on the Clyde in 1967, collaborated with Lloyds Register of Shipping to produce the specifications for a new GRP Dragon, which were adopted by the IDA in 1972.

New rules were so cleverly devised that the original wooden and new GRP Dragons could race on a level playing field and the longevity of the class was assured.

Closely associated with European Royalty over the years, in 1948, the Island Sailing Club of Cowes presented the then Princess Elizabeth and Duke of Edinburgh with a Dragon on the occasion of their wedding.

The Duke was an active member of the class for many years and presented a number of international trophies which are still raced for today. HM King Constantine and members of the Dutch, Norwegian and Danish royal families have also owned and raced Dragons, often with considerable success.

Continued careful rule management has ensured that the Dragon remains as much of a head turner today as ever, whilst at the same time incorporating the very latest racing technology. From the outset she attracted top flight sailors, and this is as true today as it ever was.

The 90th Anniversary program includes special races, such as a Lady helm race; a Junior crews where the total age of crew is to be under 100 years with the skipper born after 1986; a Masters, for where the age of the total crew must be over 180 years; a Family race where all crew must be related, and a Champion of Champions for winners and medallists of Olympic, World and European Championships and World Cup in any class and the Dragon Gold Cup.

For the main races, the fleet will be split into groups for a preliminary round robin series, followed by finals for Gold, Silver and Bronze fleets.

The on water highlight of the regatta will be the 90th Anniversary Race in which the entire fleet will race as one from a single start line. The last time such a race was run was the Dragon 75th Anniversary Regatta in St Tropez, when some 275 Dragons came to the line for a race that will always live in the memory of all who participated.

As well as those racing, the regatta will attract many long-standing Dragon friends and family. Spectator boats will be available for those who wish to watch the racing and the Yacht Club Sanremo will provide a superb base from which all can enjoy the regatta. The event will be supported by the City of Sanremo and the Royal Hotel, Sanremo.

Full details about the regatta including online registration can be found at: www.dragon90.com

About the Dragon
The Dragon was designed by Johan Anker in 1929 as an entry for a competition run by the Royal Yacht Club of Gothenburg, to find a small keel-boat that could be used for simple weekend cruising among the islands and fjords of the Scandinavian seaboard. The original design had two berths and was ideally suited for cruising in his home waters of Norway. The boat quickly attracted owners and within ten years it had spread all over Europe.

The Dragon's long keel and elegant lines remain unchanged, but today they are constructed using the latest technology, making the boat durable and easy to maintain. GRP is the most popular material, but both new and old wooden boats regularly win major competitions. Exotic materials are banned and strict rules are applied to construction to avoid sacrificing value for a fractional increase in speed.

The key to the Dragon's enduring appeal lies in the careful development of its rig. Its well-balanced sail plan makes boat handling easy for lightweights, while a controlled process of development has produced one of the most flexible and controllable rigs of any racing boat.

For further information about the International Dragon and the Dragon 90th Anniversary Regatta please visit www.intdragon.net