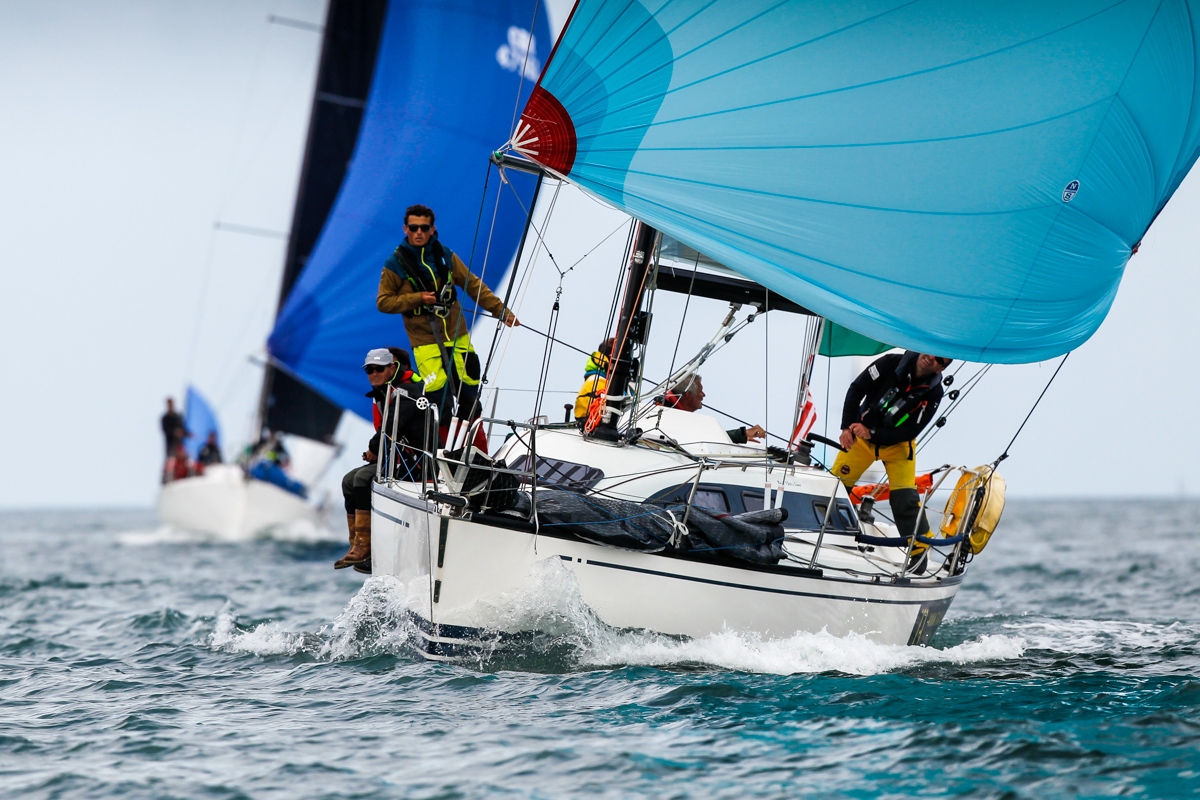 With nine JPK 10.10s in action in IRC Four, the smart money was on a fifth in a row win for the highly successful model from Jean-Pierre Kelbert’s boatyard, however, this year’s IRC Four podium did not contain a single JPK 10.10.

A ridge rolled over the fleet south of the Scilly Isles on Wednesday night forcing a race restart and, partly as a result of this, the 2021 Rolex Fastnet Race podium is filled with boats of 20 years old or more and raced by passionate amateur sailors from France and Ireland. Overall honours were claimed by Alain Guelennoc’s X-332 Trading-advices.com.

The early part of the 49th Fastnet Race was dominated by JPK 10.10s. Ludovic Menahes and David le Goff on the former’s Raphael, competing in their first Rolex Fastnet Race (after the Cap Martinique transatlantic race was cancelled), slowly ground out a lead doing a better job of playing tides along the Cornish coast.

Raphael passed up the west side of the Traffic Separation Scheme off Land’s End and remained ahead on the Celtic Sea Cross. At the Fastnet Rock Raphael was ahead on the water and held a lead of 52 minutes under corrected time from Emmanuel & Etienne Pinteaux’s JPK 10.10 Gioia.

Unfortunately for Raphael’s Brest-based crew, they ran into the ridge on Wednesday while just short of the TSS to the west of the Scillies. “There was no wind at the Scillies, so the lower rated boats came back and unfortunately we got stuck,” explained Le Goff. “We stayed there for four hours. We didn’t anchor because we had a little speed, so we tried to get out of the no wind area.”

Also suffering in the glass-out was Harry J. Heijst’s S&S 41 Winsome which had been fifth on corrected at the Rock. The enthusiastic Dutch racer, sailing his 10th Rolex Fastnet Race admitted that he had not been enjoying this race having suffered an earlier fall that had bruised the ribs on his right side.

“Fortunately, I had two doctors on board and received medicine and pain killers every eight hours. I spent most of the first two days on my berth because with this pain you cannot turn or do anything – it was horrible. I came up on deck, but I couldn’t move my arms,” Heijst said.

Winsome turns 50 next year and was built to withstand the brutal upwind conditions at the start of the race, although Heijst admitted: “I’ve hardly seen a race with such bad weather for the first two days.”

First into the ridge were largely first out, with some excellent conditions mid-Channel providing some of the best conditions of the race.

As the boats closed on the Cap de la Hague, the race for the lead on the water became a dash between Raphael, Winsome and yet another JPK 10.10 Patrick Molitor’s Fleur du Sud. However, this race became ultimately immaterial in the IRC corrected time race where the smaller boats catching the larger up at the Scillies could not be rectified.

Guelennoc was returning to the Rolex Fastnet Race after finishing fourth in 2019 (when David le Goff was part of her crew), after their performance was hampered by sail damage.

Coming from Brest in Brittany, Guelennoc has a good knowledge of racing in tide. Cape Finisterre is the playground for the boat, which is almost 20 years old: “It was very rough for the first part of the race, especially for us because we have a small 10m boat – one of the smallest in the fleet. So, it was very hard for us,” commented Guelennoc.

“Our tactic after leaving the Solent was to follow the coast of England. I have very good memories of this passage in the race – Cornwall is a very beautiful region of England. The Celtic Sea was difficult for a small boat, and we had less wind than the boats in front of us, so we fell behind.”

Trading-advices.com rounded the Fastnet Rock 11th, but as the wind speed increased so did their performance.

Guelennoc continued: “After rounding the Fastnet Rock, we made a good decision to sail to the east and we could then sail directly to the Scillies under spinnaker. We were very fast and caught up with the boats in front of us that had run out of wind. The transition was really good for us.”

After benefitting from the parking, the last run down the Channel was all about hanging on. “The approach to Cherbourg was all about controlling our competitors, staying with them, and we did that very well. We are so happy to win, it is revenge for 2019 when we ripped our mainsail. Winning IRC Four is a big success for us.”

Runner-up in IRC Four was the Irish Offshore Sailing’s Sun Fast 37 Desert Star, skippered by Ronan O’Siochru. The all-Irish sailing school team had only sailed together as a crew for one race prior to the Fastnet Race. The boat is a modified charter boat and the mainsail is a second-hand Figaro sail found in an attic and bought for just 700 euros.

“We can hardly believe it,” said O’Siochru with a smile. “The sailing school is based in Dun Laoghaire, Dublin and we have been running our big offshore campaign for the last 11 years. We bought a really old boat from Sunsail and just really re-jigged it over the last 10 years and learned how to race her and to perform under IRC.

“The team have never raced offshore before this campaign, but we have been training pretty hard over five weekends and we took part in the Dun Laoghaire-Dingle Race, winning our class last June.

“We haven’t been into the bars and restaurants in the Race Village yet because we have been cleaning the boat, but it looks like a nice set up. The way we are feeling right now, we will take whatever is available and we will be staying a few days and will enjoy the prize giving.”

François Charles’ Dehler 33 Sun Hill 3 ended up third. The team of young sailors from Morlaix in Brittany, have sailed together for many years. Sun Hill 3 has been modified with a carbon rig, which was constructed from scratch by Francois, who runs a rigging company.

“We did the last Rolex Fastnet Race with the boat but during COVID-19 we haven’t sailed as much and couldn’t try new crew members. So, we were just four on board which I think, for the forecast, was not enough,” Charles said.

“For the first part it was good, and we were the first at Start Point, but this year we made a mistake around the TSS off Land’s End coming back– we were so tired. We stayed offshore too long, we had planned to gybe, but I was sleeping. It was very tiring, like the Figaro.

“The Fastnet Rock was crazy, but easier than two years ago when it was night – we saw it this time. The run back to the Scillies was not as speedy as last time – we haven’t made 19 knots this time!

“I think the course was good but there was the wind hole. Our goal was just to finish this year, but we were leading for the first 40 hours and then we wanted to win! We are really pleased with our performance.”

At 1600 BST 19 teams in IRC Four have finished the race and 32 teams are still racing. The party is well underway in the Cherbourg Race Village and a warm welcome awaits all competitors in the Rolex Fastnet Race.