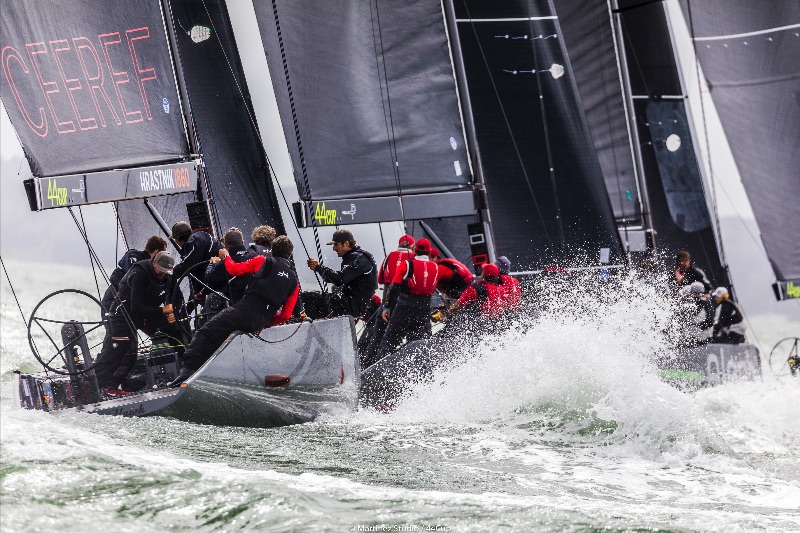 Since arriving in Cowes for the 44Cup, all eight teams had been expecting conditions to build for the second day of racing, and with 20-24 knots to kick things off, that was precisely what was delivered and Aleph finished the day on top.

But as if easing the fleet into the day, the east going tide was kind to the fleet holding them back from the line at the start and keeping the sea state relatively flat. As the day progressed and the tide turned against the breeze, the fun dial was wound up. The wind speed built, the sea state increased, and the downwind legs became full-on foam-ups.

And while fortunes were won and lost in the space of a single manoeuvre, no one came back to the dock with anything other than a grin on their face.

“That was probably the most extreme conditions we’ve sailed in for a while,” said Team Ceeref’s tactician Adrian Stead. “It wasn’t so much the wind but the short steep Solent chop that made it hard to break free on the downwind legs.”

But when they did there was no mistaking it as bow waves and straight wakes provided the telltale signs of boats sitting pretty at 17-18knots.

Even more impressive were some of the punchy moves around marks, particularly at the bottom of the course where pulling off the perfect gybe/drop rounding was as much a challenge to the rest of the fleet to do likewise, as it was a race winning move.

“There’s a lot going on in those manoeuvres and it doesn’t take much to trip up, said Team Aqua’s Cameron Appleton.

First win of the day went to Torbjorn Tornqvist’s Artemis Racing whose perfect start allowed them to develop an early lead around the two-lap course leg by leg. After a difficult day afloat on Thursday, the result was the tonic the team needed.

The same was true for Pavel Kuznetsov’s Atom Tavatuy. After a frustrating opening race today, they delivered an emphatic win in the second race.

Both performances were solid evidence that the level of competition is especially high in this fleet and that anyone and every team is likely to see both ends of the fleet at some stage. As a result, there is a deep-rooted mutual respect from team to team. Aleph Racing may have ended the day on top once again, but their tactician Michele Ivaldi was full of praise for the team that had pushed them hard.

“Ceeref are the boat of the day in my mind,” he said. “They sailed consistently well and delivered every time under pressure to finish the day with three second places. We were trying to keep them behind us, but it was hard.”

But it wasn’t all about the pressure on the water. Chris Bake’s shore crew had spent the night unstepping the mast and repairing a damaged mast track. With the work finished by 5am the next task on the job list was to get back into the mix and make the effort worth it.

“It was full on, a bit wet and our starts weren’t as good as we wanted but we managed to hang on in there to finish the day in third overall,” said Bake. “So, in that sense we’re pretty happy. The stronger breeze meant that we had to change gear and look at different angles downwind and generally keep the boat on its feet, but it was fun, classic Solent conditions.”

While Bake’s team’s job list had reduced, Team Nika’s had increased after a close port and starboard incident went wrong leaving Nika with a torn mainsail after tacking too late underneath Aleph who saw their wind instruments stripped from the top of the mast during the clash of the rigs.

Day three sees a return to lighter conditions but with the intensity remaining high.

Race 4
In another even start across the fleet it was Artemis that got its nose out in front sufficiently to develop a lead by the top mark. While racing was close around the two-lap course, Torbjorn Tornqvist and his crew managed to develop their slim lead into something more comfortable, until that is the final few boat lengths to the finish.

A crucial final gybe into the line saw second placed Team Ceeref pull off the perfect manoeuvre and while Artemis’ gybe was untidy rather than ungainly, the marginal slip up was enough for Igor Lah’s Ceeref to close the gap to less than a boat length as they crossed the line. A close call, but Artemis’ win suggested that the team were back on form.

Race 5
All for one and one for all, having exercised four clean starts in a row in race 5 the fleet were OCS en masse, forcing a general recall.

In the second start Artemis demonstrated that the difference between success and back of the fleet can often be measured in centimetres on the line. After jumping the gun Tornqvist’s crew were faced with playing catch up after clearing their infringement.

This time it was Pavel Kuznetsov’s Atom Tavatuy that dominated the race by developing a small initial advantage into a solid winning margin.

Move of the day was Ceeref’s perfectly executed final gybe at 17 knots that allowed them to slip to leeward and steal second from Aleph in the closing metres of the race.

Race 6
The tide now turned to the east and the sea state built, a lively race was in store. The second key move of the day came from Hugues Lepic’s Aleph Racing who set up a slingshot start at the less popular committee boat end of the line. Shooting over the line on time and at speed as the rest of the fleet back peddled to avoid jumping the gun gave the French boat the advantage that they had planned for.

By the top mark Aleph had built their lead and never looked back to take the final race of the day. A win that also kept them at the top of the leaderboard.

Tomorrow the fleet will once again start from the Royal Yacht Squadron line at 11.30 BST to race out to the racecourse. First warning signal for windward leeward fleet racing will be at 12.00 BST. To follow the racing live visit www.44cup.org