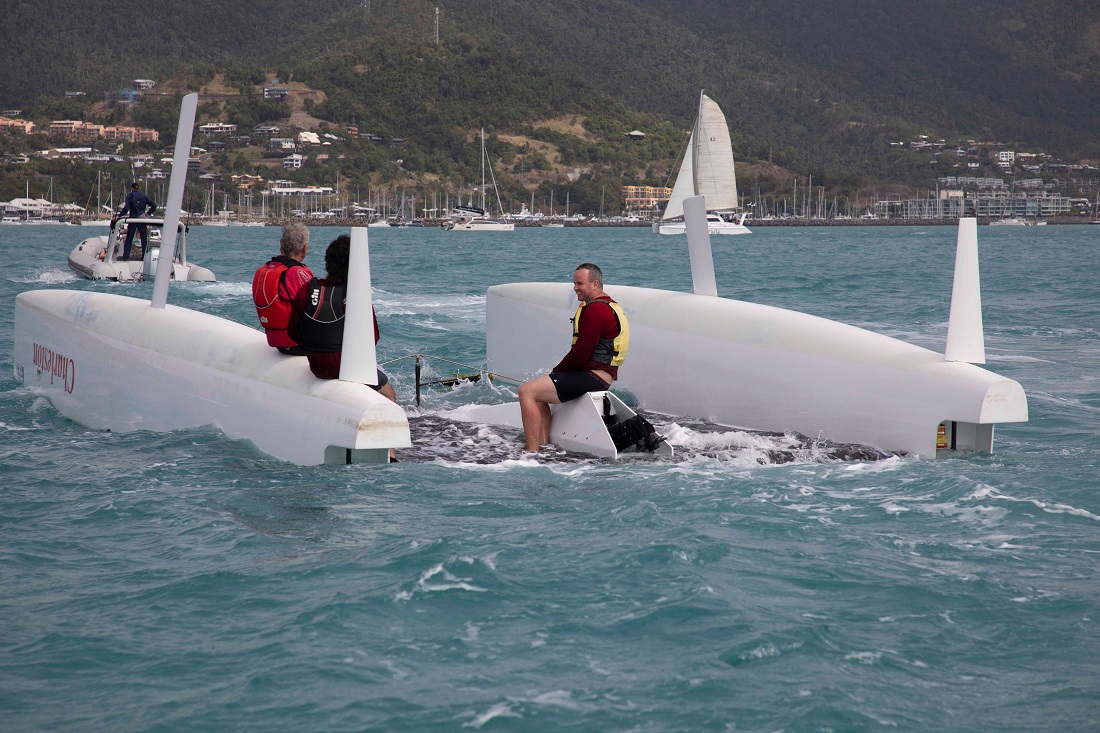 It had all the drama of soap opera; while some revelled in the 20-knot breeze, others were dismasted or were damaged, which put paid to their race on the opening day of Whitsunday Sailing Club’s (WSC) 33rd Airlie Beach Race Week.

A spectacular beginning to the week for the 75 boats as organisers called for a mass start for the fleet. It was a spectacle for viewers both on and off the water. Racing got away at 11.10am under cloudy skies and the solid south-easterly wind tested all.

George Owen’s 8.6 metre multihull, Charleston, was the first casualty. He takes up the story: “We were two-sail reaching out to Double Cones when we got serious gust. The boys went to drop the jib, didn’t happen and we end for ended the boat.

Owen said two of his crew were injured, one requiring stiches, but both are fine. The Queenslander was heartened when help arrived from many quarters.

“It was fantastic how many people came. Dale Mitchell (a local multihull sailor) was out there for three hours, then crews from the Extreme 40s came out in a series of rubber duckies. Shane Beyer drove some people out to help and Ross Chisholm (the event chairman) took stuff out to help float the rig.

“Others came that we didn’t even know. A lady from the bar came down with beers for us. She said she’d been through this before and wanted to help us. We are very thankful to all of them.

“It was the shortest regatta in history for us. We were out there for about two minutes,” Owen ended.

Shortly after this incident, Damien Suckling’s 8 metre boat, Top Gear, was dismasted. Then the rudder broke on Gregory Hammon’s trailer sailer Rossgo while Craig Humphries’ multihull, Ritalin, suffered gear problems and had to be towed back to base.

For the remainder, the day went well and the Extreme 40, Back in Black took out Division 1 of Multihull Racing from perennial ABRW winner, Paul Mitchell with Angus. Division 2 was won by Leitning Storm (Mark Leitner) with Drew Carruthers’ Rushour trailing the winner by a little more than two minutes when the handicaps were applied.

Cruising division numbers make a huge impression each year, due to the various designs, elegance and sheer numbers, with the odd famous yacht from yesteryear thrown in. The Non-Spinnaker division, with nine entered, was won by Anthea (Dewi Hughes) from Sydney’s Holy Cow!, owned by John and Kim Clinton who picked up crew in Queensland when lockdown prevented their regular crew from travelling.

The 4.4 metre fun and fast WETA trimarans are making their debut at Airlie Beach and today the spoils went to Andy Duffield with the aptly named ‘Wee Tri’. There was little in it, with Todd McVey’s The Other Office pipped to the post by less than a minute.

Despite the various lockdowns that have and are occurring in Australia, Event Chairman, Ross Chisholm says: “We are very pleased to have so many able to attend, including those from interstate that arrived well before lockdowns occurred.”

For full results in every division and all information on Airlie Beach Race Week, please visit: www.whitsundaysailingclub.com.au