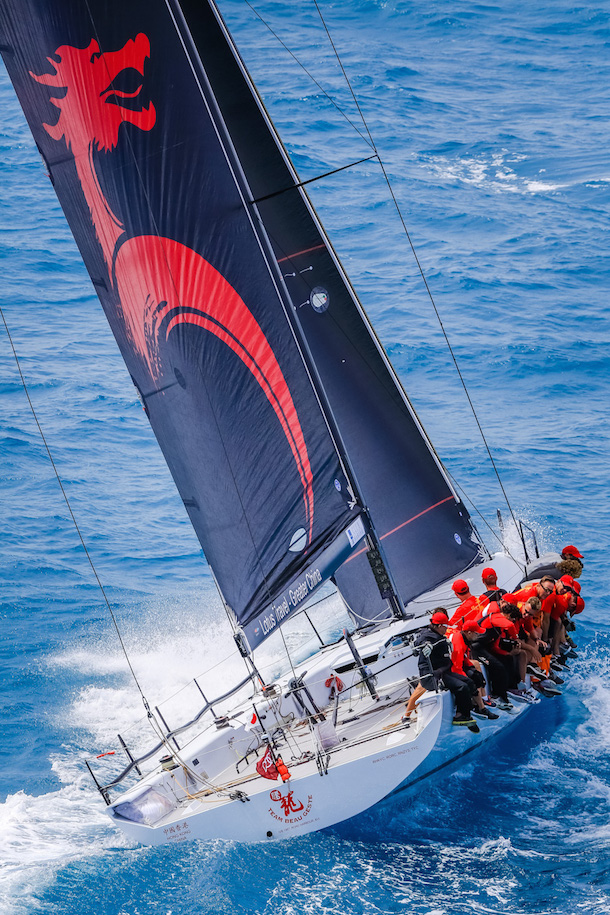 It’s the business end of the IRC Australian Championship at Hamilton Island and it appears two current national champions are on target to keep their titles.

The poorest result over seven races for Karl Kwok’s TP52 Team Beau Geste is a second, which means the Royal New Zealand Yacht Squadron entry is close to being named winner of the IRC boat division at Race Week and the IRC Australian Champion division A, both for the second year running.

Tactician Steve Hayles reckons today was their strongest sail – something the other division A crews don’t want to hear. Many of Kwok’s international crew had opportunities to race in the Rolex Fastnet Race but when they looked at the forecast, the lure of Race Week was too strong. “Gavin [Brady] said it’s the best Australian week of sailing and the best venue,” Hayles said. “With the style of racing plus everything that happens ashore it’s a pleasure to come here,” added the high profile navigator.

Kwok’s team finished the day with the new crew members put through the traditional Beau Geste initiation of eating preserved duck eggs sourced from Brisbane, called Century old or 1,000 year-old eggs. There were mixed responses to the Chinese peasant food, likened to a combination of blue cheese and something that grows on rocks in saltwater. Even Wild Oats X’s skipper Mark Richards accepted the challenge, bringing the tomato sauce just in case.

Matt Allen’s TP52 Ichi Ban holds second overall in the championship series and Geoff Boettcher’s South Australian TP52 Secret Men’s Business third, with a final islands race Saturday. “We are sailing against professional teams in division A, one or two mistakes and it’s all over,” Boettcher said.

Ray Roberts’ Farr 55 Hollywood Boulevard hasn’t been able to hang on to the TP52s in this IRC series, tactician Steve McConaghy recognising for this style of racing the all-purpose built boat that’s two ton heavier than the lightweight TPs is a mismatch.

Division B is getting spicy as second and third encroach on Bob Steel’s latest Quest, still in the lead as it has been all week. A win today for Andrew and Pauline Dally’s DK46 Khaleesi has moved them into second overall, on equal points with Jamie Wilmot and David Fuller’s Corby 49 Vamp.

“Each day we are getting better and better, when you are racing every day you iron out the bugs,” said Andrew Dally. “We are working the boat hard.”

Like Kwok in division A, Roger Hickman and Wild Rose have a cushy lead in division C and are set to wrap up the IRC championship two years running. Philip Dash’ Beneteau 40.7 Justadash and Jason Close’s Victorian Archambault 31, More Noise, chased ‘Hicko’ hard all week, but the Rolex Sydney Hobart overall winner and bluewater champion and his gender-balanced crew stayed in the driver’s seat.

“Our plan is now to consolidate second, first is gone,” acknowledged Dash today on the Hamilton Island Marina. “We finished second to Hicko at last year’s championship at Newcastle. We need a lighter air regatta to have any chance of beating Wild Rose.”

He’s not a current IRC champion but Matt Owen from Canberra is a multiple division winner at Audi Race Week. A fourth division called IRC passage was added this year to Yachting Australia’s series, for owners who prefer distance races to round-the-buoys, and 12 of the 40-strong IRC contingent ticked this option.

This morning Mark Richards met Race Week’s oldest skipper, 90 year-old Walter Jorgensen from the Beneteau called Flyingfish Let Loose in cruising division 2. It’s been a dream of the Perth sailing veteran of 60 years to meet the Wild Oats crew and he got his chance, sitting on Wild Oats X and chatting with Richards as the crew prepped the boat for their island race.

Tomorrow’s forecast is a repeat of today’s, 15-20 knots out of the sou’east and the chance of a shower or two. All divisions are due to complete a final island race starting from the eastern course from 11am. Once results are final and four new Australian champions are declared there will be an informal dockside presentation followed by the formal presentation of trophies at prizes at the sold-out awards ceremony at the Hamilton Island Convention Centre in the evening.