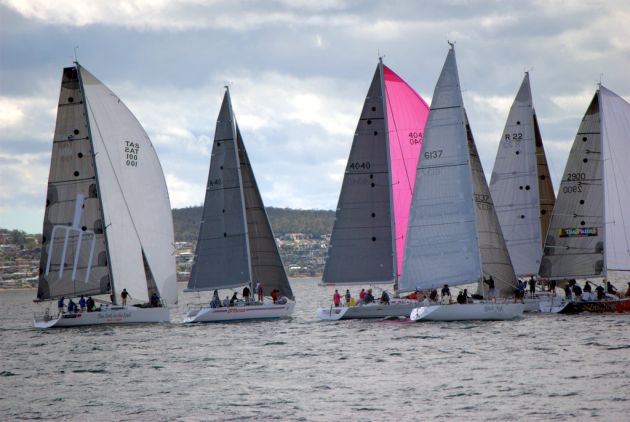 Bellerive yachtsman Harold Clark’s Invincible has sailed to an overall victory in every handicap category of Group A of the Hobart Combined Clubs Long Race Series for 2015-2016. In a brilliant finish to the summer series, Invincible won the PHS, AMS and IRC categories of the last race for Group A on corrected time.

Invincible, a Farr 1104, sailed an exceptionally good race, finished sixth in the Group A fleet and only 31 seconds astern of cross-river rival Intrigue, the Castro 40 skippered by Don Calvert from the Royal Yacht Club of Tasmania.

The 30 nautical mile race down to a mark off Richardson’s Beach in Ralph Bay and return, twice, gave the fleet a glorious finish to the summer season, sailing in a north-westerly breeze that freshened to 20 knots during the day,

The duel for line honours saw a remarkable race between Peter Cretan’s Marten 49 Tilt and Gary Smith’s The Fork in the Road. The Fork in the Road led the fleet around the first leg from Battery Point to a mark off Richardson’s Beach inRalph’s Bay and return, a fast spinnaker run down river followed by a hard beat to windward back to Battery Point, rounding the windward mark just 30 seconds ahead of Tilt.

Their duel continued with Tilt finally overtaking The Fork in the Road over the final few hundred metres from the John Garrow to Battery Point to take line honours by 16 seconds after sailing the 30 nautical mile course in the Derwent.

Group B and C sailed a 20 nautical mile course, their leeward mark also off Richardson’s Beach but their windward mark laid off the John Garrow light at lower Sandy Bay.

The final race day of the Combined Clubs Harbour Series is scheduled for next Saturday, 5 March, to wind up the summer season of racing in Hobart which attracted strong entries and hard competition in both harbour and long racing.