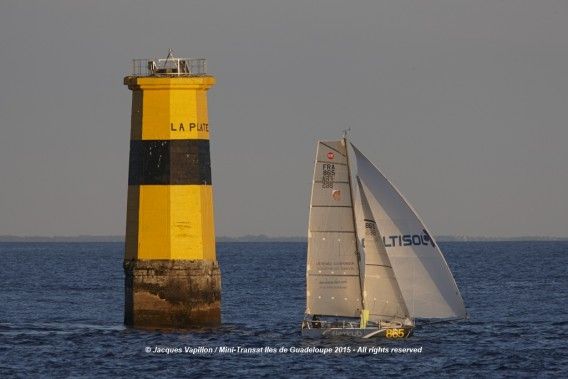 After the effort comes the comfort. In celebrating the arrival of Maxime Eveillard, the Mini Transat îles de Guadeloupe racers put a full stop at the end of this first stage. Only the Spanish sailor, Nacho Postigo (Vamos Vamos), whose boat was grounded during towing in Douarnenez, has not yet  arrived in port. His Argo 6.50  should get a new keel before it can be brought from Portugal to be ready for the start of the second stage.

During this time of taking stock of this first stage, the presiding feeling amongst the competitors in this edition is one of satisfaction. Satisfaction with having reached the Canaries without too many  big  bumps and with having benefitted from almost perfect conditions  for the whole 1245 miles in this first stage. Now, on the eve of crossing the Atlantic, there is still almost double the distance again to  complete, and everyone agrees that the game is far from over.

Solid leaders, but not invincible ones

In both the series and the prototypes boats, the two stage winners, Ian Lipinski (Entreprises Innovantes) and Davy Beaudart (Flexirub) have an undeniable advantage, as both of them left the following boats a good way behind. In the prototypes, 9 hours separate the leader from the next racers, while in the series, Tanguy Le Turquais (Terréal)  is 6 hours away from the stage leader. They are big gaps, but not uncloseable ones. In 2013, Benoît Marie was placed almost 5 hours behind Giancarlo Pedote  at the Lanzarote crossing, and that did not stop him from  winning the race by several hours at Pointe-à-Pitre.  It’s clear that the race is still open for the second stage.

Although this edition has been quick, no records were broken during the first segment. That is true for the total time taken to get to Lanzarote, even if that doesn’t count the exit from Douarnenez. It’s even clearer for the distances travelled in 24 hours. The quickest person over 24 hours was Frédéric Denis (Nautipark) who, with a total of 243.5 miles travelled, is still a long way from the 305 milles de Bertrand Delesne in Les Sables – Les Açores – Les Sables in 2010.  Likewise, in the series boats, Xavier Macaire, the recent Champion of France in offshore racing , still holds the record of 245 miles.

In this edition, the last hours of racing have been decisive. If further proof were needed, the big gaps that opened up between the leaders and the chasers immediately behind date from the 26th September, the date of the arrival of the first boats.  It was really in the last miles that the leaders made all the difference, taking advantage of favourable weather conditions to put some distance in between themselves and their rivals . More competitors have finished out of time on this first stage, meaning that they have arrived more than six days after the first boat. All of these sailors dropped time when  they had to  make a stopover in a port. On top of this, the wind  gradually dropped  in the northern zone, compounding the break between the leaders of the race and the following group, the dawdlers in this first round. Katrina Ham (katrinahamracing.com), coming in last place in this first stage, is, according to her, 417 miles behind the leader, which is a difference of almost 35% of the given time.  Some of the parameters that explain these big gaps are : weather conditions and differences in preparation and aims.

In the end,  15 competitors had to stop off in ports on the Spanish and Portuguese coasts. For eight of them, the stopover turned into abandoning the race. We should recognise the  determination of Fidel Turienzo (Satanas)  who arrived in Portugal with his mast in three pieces and repeaired them in the  legal time limit of 72 hours, and then went on to  finish the first stage.  Fidel is also in the process of sending a new mast to  Lanzarote and to be at the start of the second stage with rigging secured.

The Spanish sailors have proved themselves to have amazing determination: Nacho Postigo, an involuntary victim of grounding during the towing of his boat in Douarnenez, fought to be present at the depatrure for the second stage. He managed to get the race jury to allow him the right to repair his boat and to take part in the second stage without having raced in the first. In theory, his overall position in the race will be calculated by his time in the second stage, and from this, he will be given the same position for the first stage. If he comes 5th in the second stage, he will then take 5th position in the first stage. But an important clarification is that his position cannot affect the positions of the other competitors.

One must give honour where honour is due; a special mention must be made of the most intelligent racer, which this time, is a flying one. Maxime Eveillard, leaving la Coruna in light winds, was suprised to find that at cap Finisterre, she was playing host to a travelling pigeon. The bird, wearing  the pigeon fancier’s  regulation ring on its leg, was identified by its number when it arrived. It only took a few minutes after arriving to discover that his owner lived in Santa Cruz in Tenerife. They had only just arrived in Lanzarote when the pigeon suddenly  took off  towards its home in the west, without  further ado and without a word of thanks. As Chaval said: ‘’Birds are real schmucks’’.