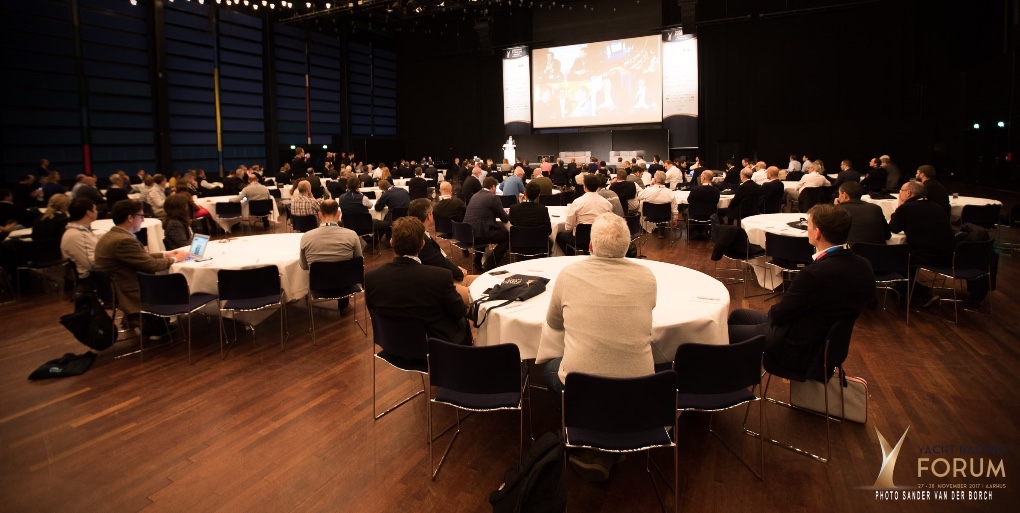 Aarhus, November 28, 2017 – More than 270 delegates and experts from around the world gathered in Aarhus, Denmark, to discuss some of the sport’s biggest opportunities and challenges at the tenth edition of the Yacht Racing Forum. There were different points of view aired and shared, and ideas to propagate from Denmark and back out to the wider world.

Top of the Sport

Giving the keynote speech to open the forum, Andy Claughton, former chief technology officer of Land Rover BAR, was not a fan of the ‘slave ships’ in the America’s Cup, nor of the one-design elements of the Cup and the Volvo Ocean Race. However, others in the audience took Claughton to task on this, suggesting it would be better to have one-designs in a commercially viable Volvo Ocean Race than no race at all.

Ian Walker, reigning champion of the Volvo Ocean Race, spoke live to three current participants in the 2017/18 race including Blair Tuke, part of the leg-one winning crew on Mapre, the Spanish entry. Nick Bice the man in charge of keeping the Volvo Ocean 65s, said he hopes to see the Open 60 adopted for the next race, even though there has been a recent management change at the top of the Volvo Ocean Race.

No one does offshore adventure racing quite like the French, and they were out in force to present some of the latest and greatest plans for ambitious events of the future, including the Ultime Class, which is pushing forward with a series of events for these giant 100ft-plus high-performance multihulls.

In a wide-ranging discussion about the future of the America’s Cup, the panel was generally excited about the announcements made so far by Emirates Team New Zealand. The radical design of a foiling monohull has the possibility for great development not only at the top end of the sport but further down too, according to Alistair Watkins, managing director of Influence Sports, who is working closely with the Kiwi defence. “We hope there will be trickledown from these new America’s Cup boats into the wider sailing world. Once people see that these boats are self-righting, maybe other sailors will be encouraged to do something similar in their sailing.”

World Sailing President Kim Andersen, explained the rationale behind the first official eSailing Virtual World Championship, which will enable people of all ages to compete online against each other. Sailing is well suited to digital presentation,” said Andersen. “The sport requires constant inputs and an acquired skillset to manage the relationship between the boat and the forces of nature. The variety in boats, from dinghies, windsurfers to 100 foot boats make it especially rich as a gaming platform. However, Jack Griffin representing the Star Sailors League, said: “The key measure has to be conversion. Digital gaming is fine, but provided it’s actually converting people into getting involved in real sailing. Otherwise what are we doing this for?

Sustainability comes in many shapes and sizes, whether it’s environmental, commercial or in terms of participation. This forum focused on the latter, with Queen Mary Sailing Club’s Tony Bishop revealing just what turned Bart’s Bash into a Guinness World Record breaking event that involved more than 10,000 participants all around the world, representing all abilities from Olympic Champions to absolute beginners. Events like the National Sailing League have taken off like wildfire in the past few years, with Oliver Schwall explaining the appeal of interclub competition without the need for boat ownership.

Some of the greatest women’s sailors were at the forum to discuss the future of women in sailing which in many ways looks better than ever, but still with a lot of work to do.

The ever-increasing speeds of high performance boats, especially with the meteoric rise of foiling, brings a new set of challenges, not least in keeping the sport safe. Sarah Allan, a maritime solicitor for Bentleys, laid out the roadmap for staying on the right side of the law and your insurance company. A panel of equipment manufacturers described the developments in protective helmets and body armour.

The Design and Technology Symposium had its strongest turnout out yet, with over 100 people attending the conference on Monday to hear 26 panelists in 12 topical sessions to discuss a wide range of topics that explained the influence technology has on sailing everything from foiling Moths to superyachts.

The future will have many interesting aspects: the foiling/canting appendages of the new AC 75 will leave room for many interesting interpretations for design teams, sails may become inflatable in some applications, and even though foiling presents opportunities to rise above the waves, there are still many in the sailing community who want to feel the very tangible pleasure of fresh air and open seas to inspire us to sail.