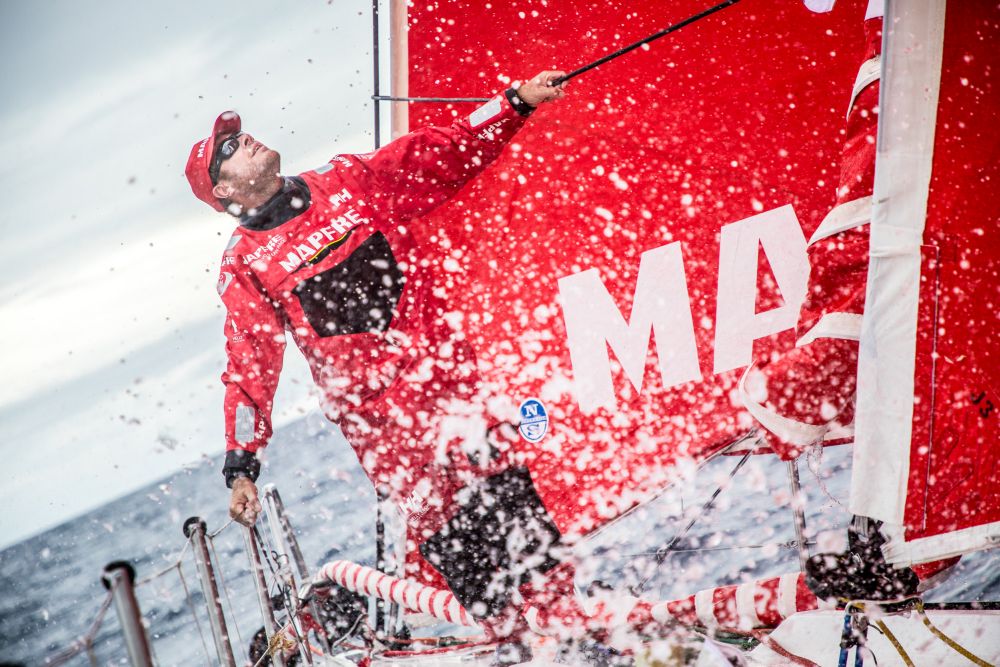 On Friday afternoon, the Spanish team, competing in the round-the-world race, claimed victory of the emblematic leg to Cape Town (South Africa) after racing 7000 miles (over 13,000 km) from Lisbon in 19 days and one hour. After two days of work, the MAPFRE crew takes their first day of rest today, whilst the shore crew continue to work around the clock to have the boat ready for next week. On Tuesday 5th December the team will have their first training day in Cape Town.

Rotation mode
Antonio “Ñeti” Cuervas-Mons, the team’s bowman and boat captain, will step down on the next leg after suffering from back pain during leg two. New Zealander Louis Sinclair will take his place. The strong fall that Ñeti suffered in the Lisbon inshore race could be the cause of his current discomfort.

“We believe that the best thing for Ñeti is that he have the proper tests to make sure he is 100% fit before continuing,” explained Pablo Díaz-Munío, doctor for the team and the Volvo Ocean Race. “These boats are very demanding physically, and one of the weak points of the crews is always their back, especially for the bowmen, as is the case with Ñeti,” added the doctor.

At the age of 35, this is Ñeti’s fourth round-the-world race. His début was in 2008 on board Telefónica black. The Spanish sailor is well aware of the tough nature of the Volvo Ocean Race, and as a sportsman also recognises the importance of the correct treatment and care of such an injury, to ensure a full recovery.

“I want to have an in-depth check-up as soon as possible, particularly since we are at the very beginning of the race,” he explained in Cape Town before leaving from South Africa, “this is a very long and intense race, a true marathon, and the team comes first. We really cannot compromise the overall performance of the team, nor of course my own. Today I will travel to Madrid to have a medical check-up, and to see the best means of recovery for my back, and to begin with treatment as soon as possible.”

Ñeti Cuervas-Mons’ treatment and recovery will be coordinated and led by Íñigo Losada, “Yiyo”, responsible for the Spanish team’s health care.

8 days of fine-tuning for MAPFRE

Since early Saturday morning, the Spanish boat has been out of the water to undergo different checks with the MAPFRE shore crew, so the boat is ready on 5th December for its first training day in South Africa.

Spaniard Antonio Piris, “Talpi”, is the shore crew manager, and with there are another five people working directly on the boat at this stopover directly in order to have the boat ready: Santi Pablos, Gonzalo Fernández de Velasco “Nervio”, Juan Pinacho, Aitor Ocerin and the local sailor Christian Gough.

“The job list is a lot less than what we originally imagined,” affirmed Talpi, “it really could have been three times longer, but the boat left Lisbon very well-prepared, and although it was a spectacular start to the leg, with a lot of wind, apart from the first few days, the conditions, according to the comments I have heard from the crew, were quite easy.”

“The boat was without load and didn’t have upwind conditions and seas to deal with, so there hasn’t been any problem with the sails, which are in perfect shape. The hull is perfect as well, and there weren’t any collisions, with the exception of a small knock to the keel, which is easy to fix. We will also have to re-touch the paintwork, but that is all normal, and something we expect and will have to do after each leg.”

MAPFRE will return to the water on Sunday 3rd December.