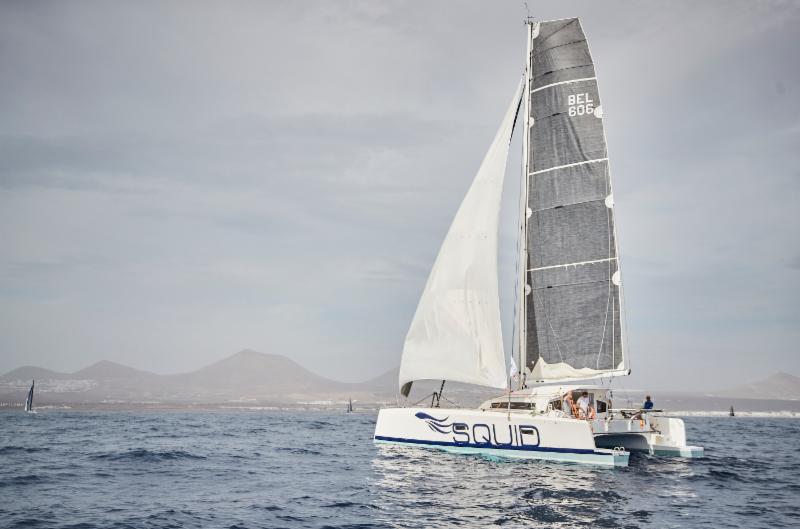 The record fleet in the RORC Transatlantic Race (1st leg of the westbound Atlantic Anniversary Regatta) have been at sea for five days now, and all of the 22 yachts still racing have turned their bows south towards Camper & Nicholsons Port Louis Marina on the spice island of Grenada.

The majority of the fleet have yet to cross a long ridge of high pressure extending from the Canary Islands across the Atlantic to reach the northeast tradewinds. Over the next day or so, one of the biggest tactical decisions will play out in the 3,000 mile offshore race; crossing this area of light winds as quickly as possible will be richly rewarded. Leaders are beginning to emerge in the relative classes and the line honours leader, CQS has a virtual opponent to contend with.

At 0800 UTC on Wednesday, Sorceress was the closest yacht to the finish, 2,092 nautical miles from Grenada. However, Ludde Ingvall's Australian 98ft Maxi CQS, which had made the decision to go south after rounding Tenerife, was fully into the tradewinds with a VMG of over 10 knots, compared to Aragon's VMG of just over six knots. Keen observers of the race will note that a new 'virtual competitor' has been added to the YB Tracker. The 'ghost' of Nomad IV's track in 2015, which represents the challenge to CQS to set a new monohull course record. CQS virtually passed Nomad IV in the early hours of day five.

The YB trackers estimate the positions of the yachts on handicap, based upon its distance from the finish, and its average speed from the start and distance sailed over the last 24 hours. It currently has Teasing Machine leading overall under IRC rating. Outsider is second overall and Aragon third.

In IRC One, Bjoern Woge's German JV53 Broader View Hamburg is leading the class and Richard Palmer's British JPK 10.10 Jangada leads IRC Two and the Two Handed class. In the Class40s, Berthold & Tobias Brinkmann's MarieJo was the first to turn south. Mathias Mueller von Blumencron's Red still leads by 26 miles, but the move by MarieJo looks to have paid off.

Andrews 56, Haspa Hamburg and Broader View Hamburg are owned by Hamburgischer Verein Seefahrt (HVS). Established in 1903, the HVS encourages young sailors to race offshore. Haspa Hamburg's skipper is 20-year old Max Gärtner and the navigator and watch captains are all in their 20's. Haspa Hamburg's blog tells the story from on board:

“The race tracker is fascinating as some teams have already tacked and are now heading south; others seem to hesitate to make that move. We have been sailing upwind for 36 hours now and trying to figure out when the time has come for us tactically to go straight for Grenada. In the starlit nights, single squalls eventually come through forcing us to reef and keep us focussed. The spirit on board is pretty good but we are all hoping for a sudden wind shift to run downwind to the Caribbean – that was our plan.”

Gerald Bibot racing his Belgian Catamaran Zed 6 sent a philosophical message to the race blog. Gerald suggested a northerly route would pay before the start, as it had done in his last race in 2015.

“Somebody told me, gentlemen always sail to windward. I guess we're no gentlemen. I'll live with that. Well if that was just it, that'd be wonderful! We had some issues with electrical/IT stuff. Good news, the fridge is not down; the worst has been avoided. Our north route has not paid off yet. I guess this year has nothing in common with the 2015 edition. We still have to cross the ridge; we'll take it an alternate way.”

Jens Kellinghusen's German Ker 56 Varuna has retired and has now returned to Marina Lanzarote; all crew are safe and well.