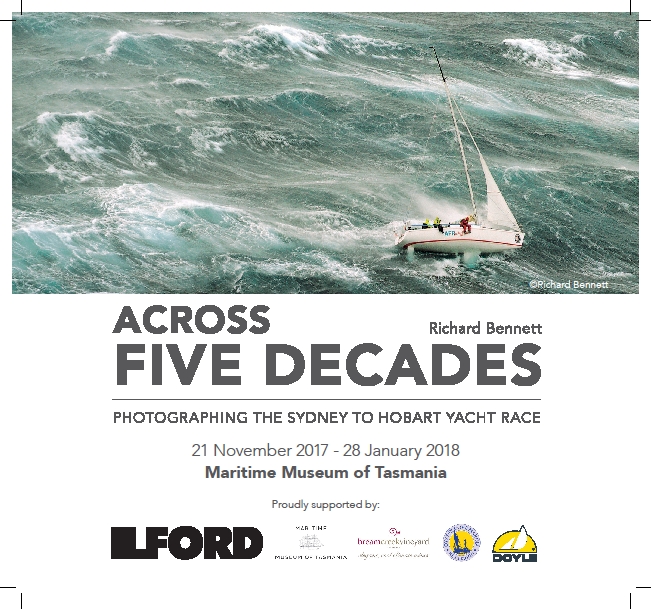 Richard Bennett has been hanging out of windows of low-flying, small planes for over 42 years. But it’s not the adrenalin rush he’s after; in fact he’s probably concentrating too hard on light, angles, focus and composition to become white knuckled.

Each Christmas to New Year since 1974, Richard has taken dramatic aerial photographs of yachts competing in the Sydney to Hobart Yacht Race. The result is an extensive body of work – one man’s creative view, but also a magnificent visual compendium of the history of one of the world’s most famous yacht races.

For an exhibition in the newly re-opened Carnegie Gallery space on the top floor of the Maritime Museum of Tasmania, right opposite Constitution Dock, Richard has selected his most outstanding images, displayed chronologically on the walls.

Richard Bennett is one of yachting’s pre-eminent living photographers, published in Paris Match, Vanity Fair, GEO and Life Magazine and literally every sailing publication around the world. His work featured in the International best-selling book ‘Fatal Storm’. Bennett has won Australian Press Photographer of the Year for the Best Sports Photograph, has been a guest exhibitor – with the world’s largest diorama – at the International Photography Hall of Fame and his work has been presented by the Maritime Museum Of Tasmania to H.R.H Duke of Edinburgh on a royal visit.

An iconic photograph of a yacht leaping upward at 28 knots in a 60 knot gale in the 1990 Sydney to Hobart earned him the title as ‘the man who shot ‘Wild Thing’. Selling in over 46 countries, it became one of the most successful yacht images ever taken. “If the yachties come to Hobart and I have missed their boat,” says Bennett, “they will order a picture of ‘Wild Thing’ instead. Twenty seven years later they are still ordering it.”

naturally, ‘Wild Thing’ will feature in ‘Across Five Decades’ alongside another famous shot – of the yacht Shogun, Shogun passing Tasman Passage in the 1984 race that won the esteemed Ilford Trophy for the highest scoring image. Other shots capture the spirit of different eras. Enlarging a shot of the yacht Pilgrim the early 1980s, Richard noticed an interesting detail, “I thought, hang on. These guys are not wearing thousands of dollars of flash Musto outfits. They are wearing woollen jumpers!”

Sailing techniques, gear and sailing photography all continue to evolve in the famous race. But not even drones can replace what Richard Bennett, himself an accomplished yachtsman, has done and continues to do. “A drone runs on a battery which may last about twenty to thirty minutes, has a range of around five kilometres and operates in relatively still air,” he says. “If there is strong breeze, a drone just can’t go there.

Nobody really knows what goes on out there. The press is essentially waiting at each end. I am still the only one out there photographing every boat. Photography is really about the senses. It’s not a remote activity. You have to be right there. I am there where all the yachties are.”

The prints are originally hand crafted by Bennett in his studio in Bruny Island, using a special technique developed by him that gives a unique luminosity and depth. Many of these have never been seen this way before. The images are fine art digital prints printed by Ilford on 100% Ilford cotton rag archival paper and Epson archival ink.