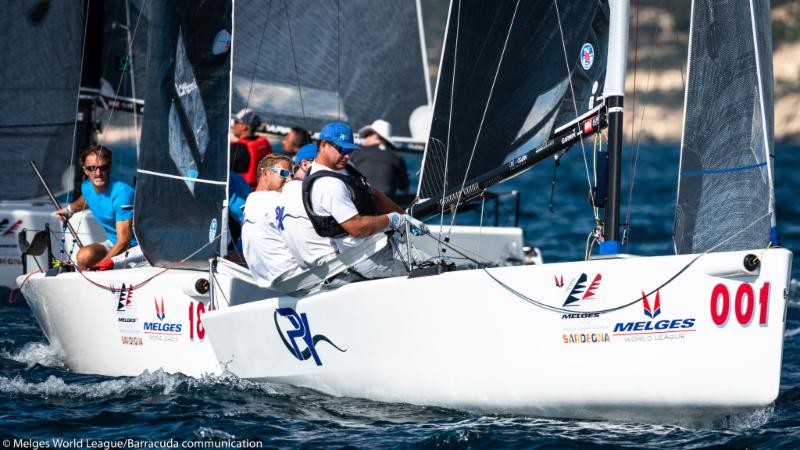 Cagliari, Italy: Three additional races were completed at the 2018 Melges 20 World Championship, hosted by Yacht Club Cagliari, bringing the number of completed races to six, which also prompts a discard of each team's worst score.

The third day of scheduled racing brought fireworks to the race course as the air grows more intense, and the Class prepares to crown the next world champion.

The first race of the day (Race 4) got underway in a 10-15 knot southerly, with Pacinotti picking up where he left off Thursday, collecting another bullet – his second of the event. Achille Onorato's Mascalzone Latino Jr. (Paul Goodison, tactician) achieved his best score, finishing in second place, followed by Rytov.

Rytov rallied back to win Race 5, taking over the event lead. Things 'got real' for Pacinotti as a mid-fleet finish temporarily slipped him back into second place.

American Alexis Michas at the helm of midnight sun (Mark Mendelblatt, tactician) found a ray of light to finish second. Stefano Visintin racing Kindako (Matteo Ivaldi, tactician) was another new face that found his way to the forefront of the fleet to take third.

Freides reminded the fleet he is reigning world champion with a phenomenal win in Race 6. Right behind him, Rytov crossed the line for second. Pacinotti's third was enough (with the overall discard) to put him back into the event lead. Dario Levi's Fremito D'arja and Oleg Evdokimenko's Kotyara finished the race in fourth and fifth respectively.

Although all eyes are on the top three, and the high-anticipation as to who will be the next Melges 20 world champion almost unbearable, there is the impressive first Corinthian player seated in fourth overall.

Russia's Alexander Mikhaylik and his amateur crew aboard Alex Team delivered an all-top-ten-finish performance today, sending him up the charts and into the top five. Vladimir Prosikhin's Nika is in fifth.

Looking ahead to the final day of racing in Cagliari, one thing is clear. Every team in the top three is in contention for the title. At this point, nothing is impossible. But to quote the 1986 British-American fantasy, action-adventure film Highlander – there can be only one.