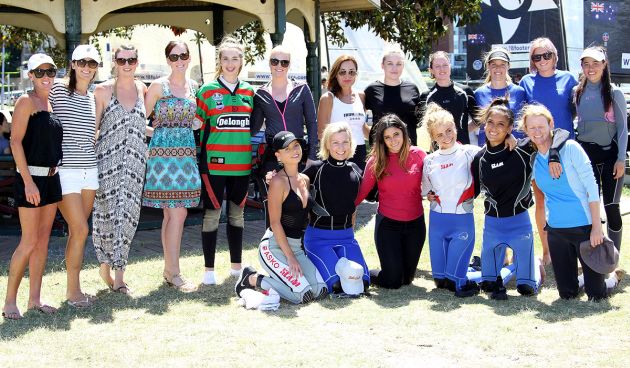 Eighteen-year-old India Howard became 18ft Skiffs 2016 Queen of the Harbour when she teamed with Stephen Quigley, Thomas Quigley and Sam Ellis on Alcatel One Touch to claim the title with a brilliant victory on Sydney Harbour today.

India Howard is a local girl, who lives only a couple of minutes from the 18 Footers League clubhouse.  She began sailing as a 14-year old, attends Ascham School and is a member of CYC Youth Match Racing.

Today’s race was sailed in a 5-8knots ENE breeze over the NE course. The angle of the breeze meant that the windward leg required very little work with most of the fleet reaching the rounding marks in only a couple of legs.

De’Longhi’s team were very consistent throughout the leg and held a narrow lead over Alcatel One Touch as spinnakers were set for the run back to the wing mark off the southern end of Shark Island. Triple M was third with a large group, including Thurlow Fisher Lawyers (Michael Coxon), Asko Appliances, Mojo Wine (James Ward), Appliancesonline.com.au (Anthony Scali), Compassmarkets.com (Keagan York) and Smeg not far behind.

The breeze were inconsistent and the three leaders increased the margin on the spinnaker legs and were well ahead of the fleet on the following work back to the windward Beashel Buoy marks.

As the race progressed, the Alcatel One Touch team proved that the improved form they had shown in the recent JJ Giltinan Championship was a new level for the team. Skipper Stephen Quigley is a JJ Giltinan champion (1996) and he now has a rookie crew of son Thomas Quigley and Sam Ellis.

All the ‘Queens’ were worthy competitors in this annual event which has been sailed since the 1930s. Mojo Wine’s Sarah Lee went further than becoming part of the crew and was seen to be steering the skiff throughout the race.

Race 10 of the Club Championship will be sailed next Sunday,  and the Australian 18 Footers League will have its usual Spectator Ferry available, leaving Double Bay Wharf, alongside the clubhouse, at 2.00pm, to follow all the action.