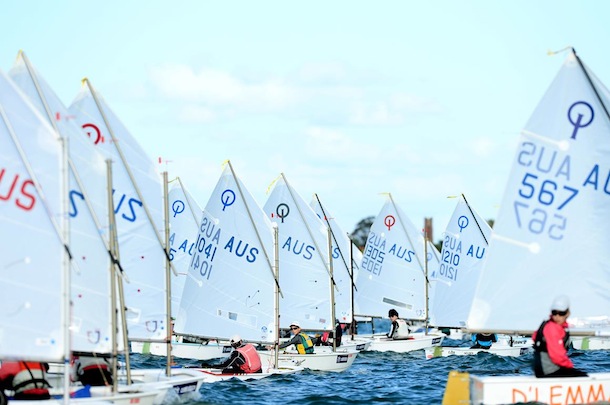 The Optimist Class is a junior sailing phenomenon worldwide. With more than 150,000 competitors in 110 countries and highly organised class associations with the networking and publicity nous to match, it’s no wonder international regatta organisers want to join hands.

On top of the standard fleet racing among the Optimist class at this year’s ISAF Sailing World Cup – Melbourne, organisers in collaboration with the Victorian International Optimist Dinghy Association (VIODA), have created the inaugural Optimist Nations Cup.

Letters outlining the principles are going out to Optimist associations in countries near to Australia, and already Japan, China, Hong Kong and New Zealand are considering fielding teams.

“The new Optimist Nations Cup, running in conjunction with the ISAF Sailing World Cup Melbourne event, is something we are very keen to grow into an annual fixture in the Oceania / Asia region,” said Sailing World Cup event director Mark Turnbull.

“A representative team’s event fits in perfectly with the Sailing World Cup’s Invited and Youth Classes charter that already offers a top tier Opti event for intermediate to open level sailors – last year the kids went out in 25 knots so it’s not one for beginners. It’s about the best in our region having the opportunity to sail against each other, and it has the potential to develop into something pretty large and prestigious.”

VIODA president and mother of two Opti sailors, Kate Goss, says: “There’s the Optimist Worlds or there’s the ISAF SWC in Melbourne, which is another international regatta. It’s where the dreams start, at the grass roots. If we were in a situation to grow an international standard Opti regatta each year in Victoria, it couldn’t help but lift the standard of our own fleet.”

The Nations Cup will be based on international or state teams of six sailors plus two adults, a coach and guardian, representing their country with racing from Thursday December 10 to Sunday 13, 2015. Points from the top five sailors from each team from each race count towards each team’s score.  The sailors making up these teams will be racing both for individual honours in the open Optimist regatta as well as representing their state or country.

There will be a range of onshore and social activities arranged by VIODA and the event to complement the racing off St Kilda, the Sailing World Cup’s new home having moved to the bustling seaside suburb close to Melbourne’s heart.

Three entry packages at varying price points have been devised for Opti class sailors; from comprehensive, which includes charter boat, accommodation and airport pick-up, to medium level and basic, which includes the entry fees and a number of class functions.

A VIODA team is racing and being billeted with families in Qingdao, China this week and Goss says these exchanges are as much about the cultural transfer as it is about the competition. “Our kids have an arrangement with Qingdao and come back from China with new friends, and being able to use chopsticks. At last year’s Sailing World Cup we put on an Aussie BBQ and the kids played soccer with the Chinese, Japanese and New Zealand sailors. It’s great for the parents too!”

The 2014 ISAF Sailing World Cup – Melbourne drew an Opti fleet of 107 boats. Adding the Optimist Nation’s Cup team’s event could mean a fleet of 130 to 140 this coming December Goss forecasts, and once the word spreads she anticipates more countries sending teams next year.

“VIODA and the ISAF Sailing World Cup – Melbourne extend a very warm welcome to the entire Opti community to be part of the inclusive Olympic and youth class regatta, and now the Optimist Nations Cup. Even if you aren’t competing we encourage Opti families to come and be part of the spectacle, and maybe work towards putting in an entry next time around,” Goss says.