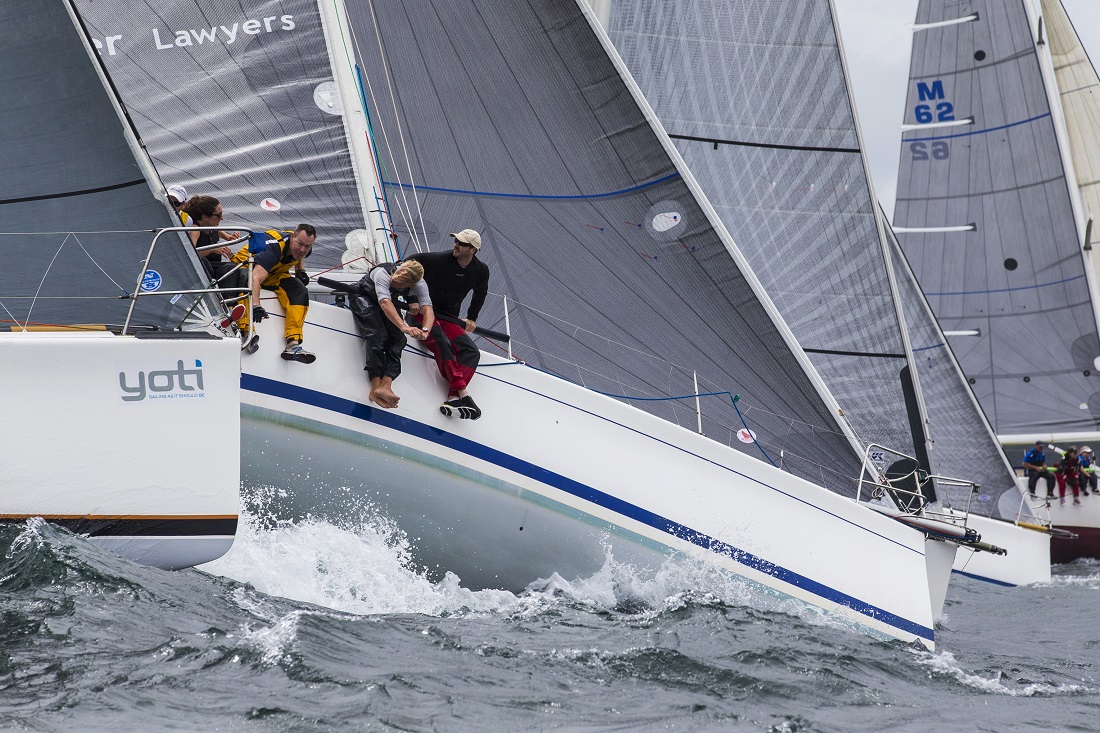 Big conditions on Sydney Harbour pulled racing up short by one race today when 30 knots was registered on Sydney Harbour, but it was water off a duck’s back for Kirwan Robb and his Ikon38 crew, who continue to lead the Sydney 38 OD International Championship at Middle Harbour Yacht Club’s Sydney Harbour Regatta.

Robb and his crew, representing Hobsons Bay Yacht Club in Victoria maintained their solid performance of yesterday, with a third in Race 4 and a bullet in Race 5 to increase their overall lead to six points over Race 4 winner, Richard Holstein’s Next (CYCA),. Holstein dropped to fifth place in Race 5.

Meanwhile, Renaud Gerardin and Mana Malmezac (Calibre) one of two entries representing New Caledonia, become a serious threat after placing second on both races. It means third place for the French, just five points adrift of Next.

Leon Thomas, one of two Aussies aboard Calibre, which is representing the Cercle Nautique Caledonien, explained how they sailed so consistently: “We sailed conservatively, did the basics, stayed stable. It was blowing 27 knots on the last leg of the second race.”

Due to sail their series offshore, Principal Race Officer Denis Thompson moved all offshores courses to inside Sydney Harbour for today’s races, because of steep seas and winds in the 25 knot range. “Safety first,” Thompson said.

Even so, racing was not incident free. Matthew and Nick Hundleby’s Rush and Peter Byford/David Hudson’s Conspiracy involved in a collision in the first race of the day, Race 4, on approach to the first windward mark on the first leg of the windward leeward race.

Both yachts sustained damage, Conspiracy’s deck parting company with the hull and Rush breaking a pole.

“Hopefully we can repair the deck and get racing tomorrow,” said Byford, President of the Sydney 38 class.

“It’s very disappointing (they missed that and the subsequent two races) because we put in such a big effort to be here. But if we get out tomorrow, all will be good.”

A protest will likely be heard this evening.

Another overcast and rainy day on which Principal Race Officer, Denis Thompson made the decision to bring the fleet into the Harbour due to steep seas and winds up to 25 knots on the planned offshore course on the Manly Circle this morning.

The Sydney 38 OD International Regatta is a first international event for the class, but the Association’s Peter Byford said, “this is just the beginning,” for the reinvigorated one design class.