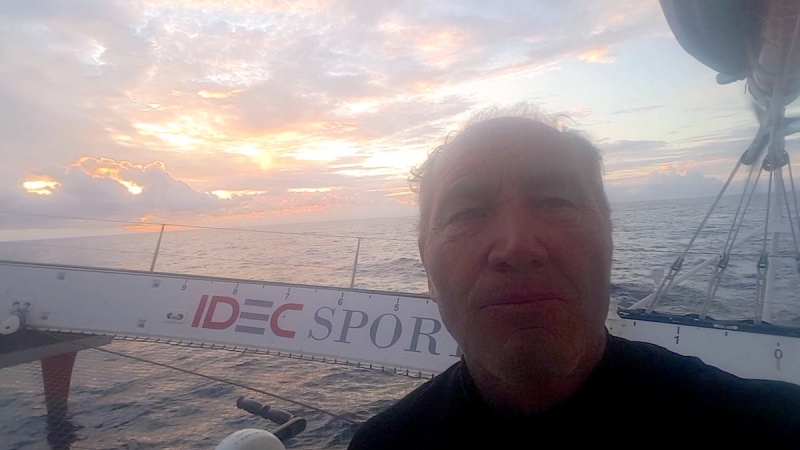 Since last Saturday, Francis Joyon has been tackling the Mauritius Route record between Port Louis (Brittany) and Port Louis (Mauritius) and crossed the first virtual mark in this record at 1159hrs UTC on Saturday, setting a new reference time of 7 days, 2 hours and 43 minutes, one day shorter than the reference time set 10 years ago.

This is the first good reason for the skipper of IDEC SPORT to feel pleased. In order to smash the Mauritius Route record, he needs to reach Mauritius by 14th November.

Setting sail on Saturday 19th October, Joyon crossed the start line off the Citadel of Port Louis at 0911hrs UTC, without being very certain about the conditions he would encounter on the way down towards the equator.

Joyon even imagined he would be a day behind schedule entering the Southern Hemisphere. The opposite turned out to be the case, thanks to some decent weather patterns, which offered fairly favourable conditions and a passage through the Doldrums last night where he was not really held up.

He crossed this area, which is usually so complicated, without really being held up. After, he encountered a squall during the night and then continued his voyage averaging around 20 knots towards the line separating the two hemispheres.

The Mauritius Route is the first act in the IDEC Sport Asian Tour, the new campaign of record attempts, which the skipper of the boat is trying to achieve on his way to Asia.

To begin, Francis Joyon is attempting to smash his own record set ten years ago with a time of 26 days, 4 hours and 13 minutes. To improve on that record, he will have to finish in Mauritius by 1324hrs UTC on 14th November.