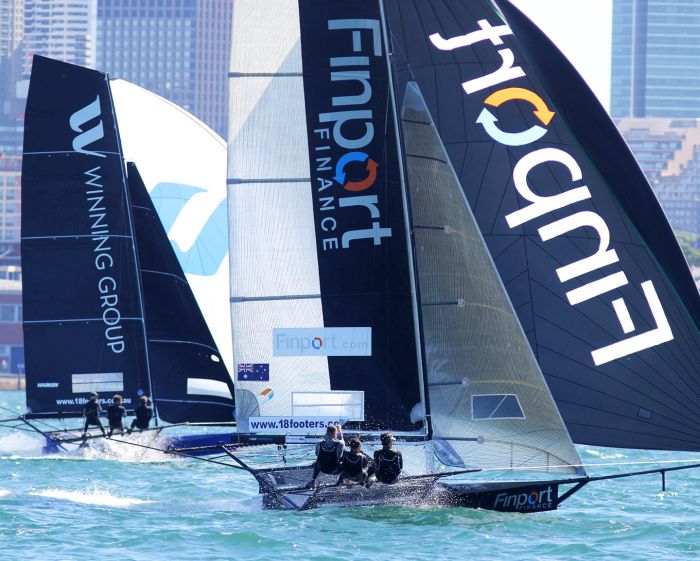 Only a few secs separated Winning Group and Finport Finance on the second spinnaker run to the bottom mark. Photo 18 Footers League.

28/10/2019
Race 1 of the Australian 18 Footers Club Championship, sailed in a 12-14-knot ENE wind on Sydney Harbour today, produced one of the closest and best 18ft Skiff races seen for a few years, and gave the Finport Finance team victory over arch-rival Winning Group.
The Finport Finance crew of Keagan York, Matt Stenta and Angus Williams took the lead at the end of the first lap of the course, and despite losing it to Winning Group at the following windward mark, came back strongly over the final lap of the course to grab a 11s victory.
Winning Group (John Winning Jr., Seve Jarvin, Sam Newton) shared the lead with Finport Finance for two laps of the Easterly course before going down by the narrow margin. The Oak Double Bay-4 Pines (Aron Everett, Courtney Maher, Charlie Gundy) came back strongly over the second half of the course to finish a further 55s back in third place.
Appliancesonline.com.au (Brett Van Munster) was another team to finish strongly after being placed ninth in the fleet after the first lap of the course. Last week's race winner Noakesailing (Sean Langman) finished in fifth place with Dal Zotto (Jack Sprague) rounding out the top six.
The Dal Zotto team sailed a brilliant course to take advantage of the breeze up the first windward leg into the Rose Bay windward mark and led the fleet by 25s as spinnakers were set for the run to the wing mark off Clark Island. Winning Group was in second place, ahead of Finport Finance and RMarine (Marcus Ashley-Jones), Smeg (Micah Lane), The Oak Double Bay-4 Pines and The Kitchen Maker-Caesarstone (Jordan Girdis).
Dal Zotto retained the lead at the wing mark, however Finport Finance was showing great downwind speed to pass Winning Group and moved up to with just 5s of the leader.
The direction of the breeze on the spinnaker run to the bottom mark off Kurraba Point made the crews work hard but produced some spectacular rides before Finport Finance grabbed a 8s. lead from Dal Zotto, with Winning Group only 2s. further back.
Winning Group was sailing fast on the windward legs of the course and reversed the placings at the head of the fleet when she was 18s. ahead of Finport Finance at Rose Bay on the second lap of the course.
After the long spinnaker run from Rose Bay, on the south side of the harbour, to the bottom mark off Kurraba Point on the north, Finport Finance again showed her downwind speed to reduce Winning Group's lead to just one boat length as the two champion teams prepared for a match-race over the concluding lap of the course. The Oak Double Bay-4 Pines had also shown great downwind speed and grabbed third place ahead of Noakesailing and Dal Zotto.
Spectators on the club's ferry weren't disappointed as Finport Finance and Winning Group exchanged the lead on at least three occasions before Finport Finance finally reached the windward mark in Rose Bay with a 3s. advantage as the pair headed for the finish line off Clark Island. Finport Finance's downwind speed was again clear as the team edged away to cross the line with 11s. to spare.
Spectators all left the water convinced they had seen one of the best races for a few seasons and are looking forward to the next time the fleet contests a round of the Club Championship.
The Australian 18 Footers League's 2019-2020 Season continues next Sunday when the club will stage Race 4 of the Spring Championship. Spectators can see all the teams in the rigging, then follow the racing on board the spectator ferry, which leaves Double Bay Wharf, alongside the rigging area, each race day at 2pm.
Book online through the club's website www.18footers.com
The livestream video team is also out on Sydney Harbour to capture all the action for those who can't make it onto the water.  Livestreaming is available by going to www.18footers.com and clicking on the '18 Footers TV' link.
Frank Quealey
Australian 18 Footers League
www.18footers.com