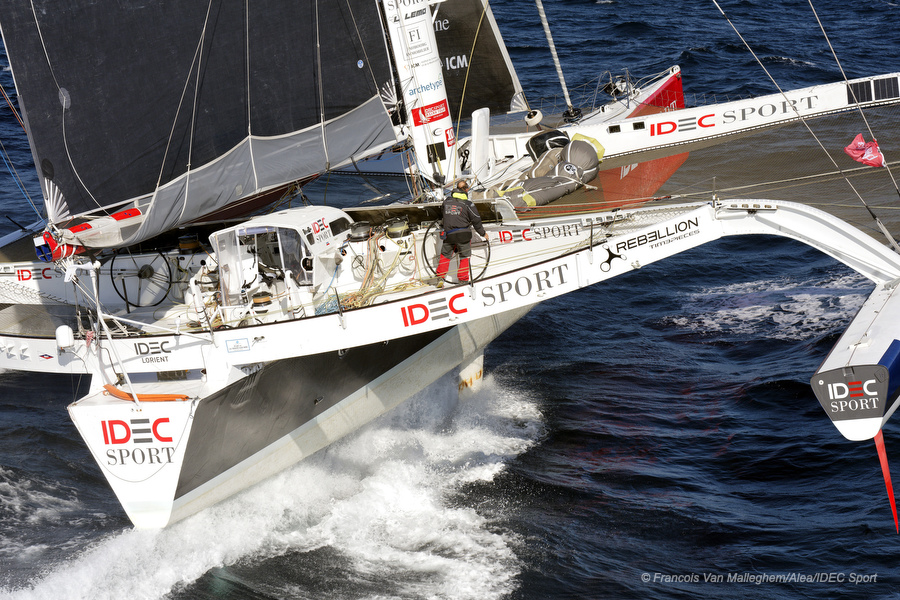 The huge improvement in the reference time between Port Louis (Brittany) and the Cape of Good Hope (2 days and 19 hours) achieved yesterday has not led Francis Joyon to ease off or modify the pace he has set since moving away from the coast of South America.

For the sailor facing the harsh reality of the Southern Ocean, the problem has not really changed. The powerful low he has been speeding along on the edge of for six days still has the fuel required to allow him to improve still further on his performance as he heads towards Mauritius. Francis is having to dig deep within himself to find the energy to maintain an impressive level of concentration and performance hour after hour and wave after wave.

“I am continuing with the same weather pattern in order to advance on the northern edge of this low,” the skipper of IDEC SPORT confirmed. “During the night, I had a bit of a scare, when the wind dropped off suddenly to 14 knots. The skies were completely clear and I thought for a moment that the high had caught me. It was only a short worry, as the wind soon got up again, a bit lighter than during the weekend, at around 25 knots.”

This means he can still speed along at 27-28 knots and maintain his huge lead of almost 1300 miles over the record pace. We can remember that in 2009, when the second IDEC trimaran to bear the name climbed up towards Mauritius, it was particularly testing.

“I had to sail a long way east on the stretch down below South Africa,”remembers Francis. “This year, the weather pattern is much more favourable. I shall be maintaining these high speeds for another 930 miles or for a day and a half, before turning left and climbing up the Indian Ocean towards Mauritius.”

Some brighter weather and a warmer atmosphere lie ahead for Francis. “Christian (Dumard), suggested I carry out some gybes during the night to position myself in relation to the Agulhas Current and avoid the nasty waves coming towards me in this area. The wind turned to the south for a moment and the temperature dropped off. I now only have a 12-foot swell and IDEC SPORT is sailing smoothly.”

After 16 days at sea, Francis Joyon is over the moon and enjoying his sailing. His amazing route across the South Atlantic has filled him with joy. He has made it all look so simple having to deal with the elements thrown at him, but it has taken a lot of hard work and commitment, which from ashore seems absolutely incredible, but the skipper of IDEC SPORT has taken it all in his stride.