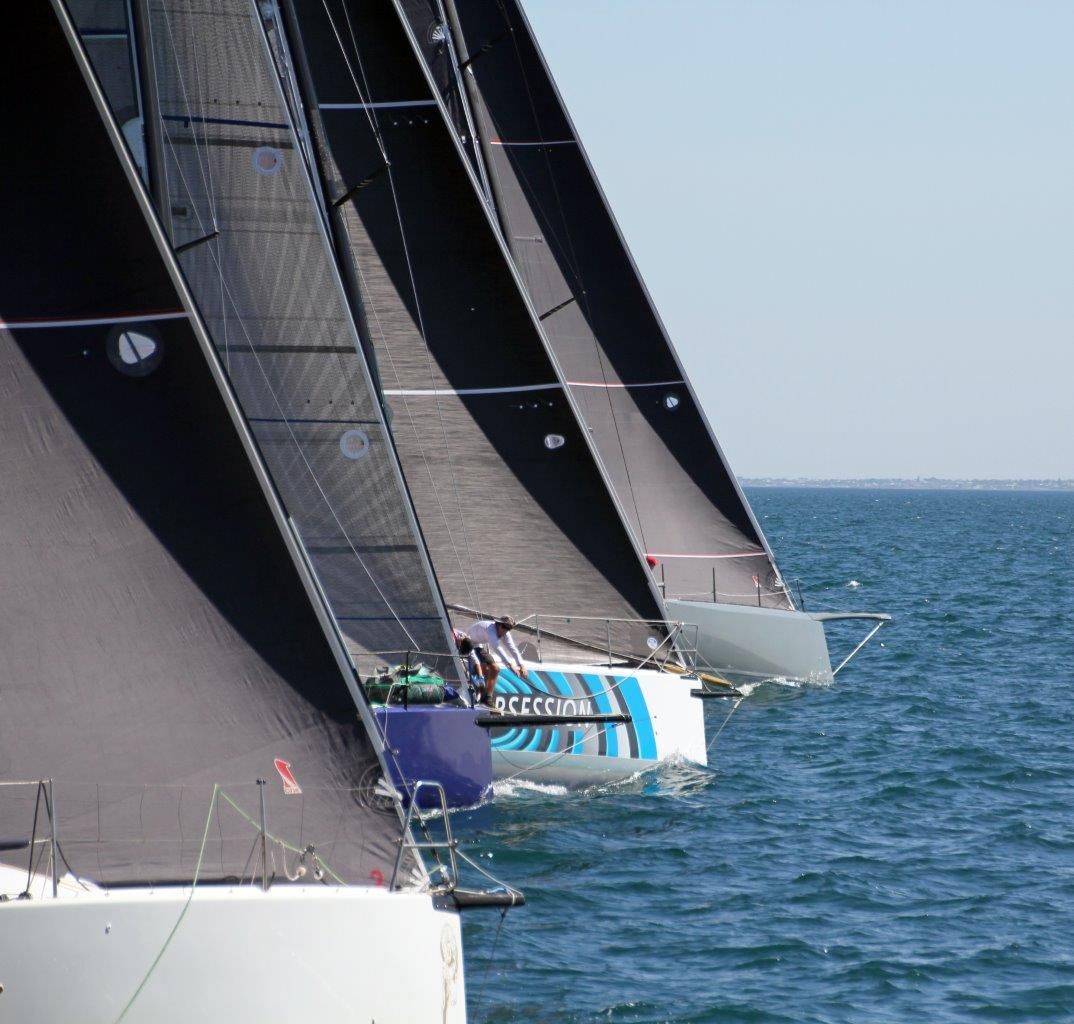 It was a clear start for the fleet of 18 yachts in the Roland Smith Ocean Race last Saturday. The annual 80 nautical mile race is run by Royal Freshwater Bay Yacht Club in Western Australia.

The race began in the Fremantle area in a moderate offshore wind. All yachts started on the one start line together with Indian, Obsession and Weapon of Choice having the best start. They raced in flat water to the day buoy located just off Port Beach making a right turn towards the Channel. Craig Carter’s Carkeek 47, Indian, led the fleet followed by Gary McNally’s Black Betty (Optimised Bottin GP 42) and Obsession, the MAT 1245 owned by Paul and Ceris Arns. With spinnakers flying the fleet headed south along the Fremantle Channel making their exit offshore between Garden Island and Carnac Island.

Alan Stein’s GP42 Dirty Deeds reports after the race “The easterly was kind enough to blow us through Challenger Passage and then we settled down for the trip south as the breeze settled down and began to build from the south. We were in touch with the black boat (Black Betty) as we went into the channel but the distance stretched all morning and by the time we reached turning mark they had a handy lead.

We set off on the trip home using the re-cut A3 in close company with Wildside (Garth Curran’s Inglis 57 Walk on the Wildside). The clear ocean behind us was good but the spec of a black hull on the horizon was depressingly small. Fantastic sail with consistent speeds over 15 knots. The sun was in the sky, the breeze was stiff and it was coming over our shoulder so all was good in our world.” concludes Dirty Deeds Racing.

Michael Thorpe and crew on the S&S 34, Soon, raced in company with Double Handed sailors Tim Harrison and Andrew Renwick on Vision, a Spacesailor 27. As they passed Safety Bay, the mid fleet boats had turned in Mandurah and were passing them out to sea on their way to the West End of Rottnest Island. Mark Nagle’s Weapon of Choice (FB 35) side by side with Anthony Kirke’s Farr 40 Enterprise and closely followed by Obsession, John Rayner’s Al Fresco (BW36) and Chris Higham’s Archambault, Argo. They were travelling at around 12-14 knots with a good southerly wind building behind them.

In front of them, Walk on the Wildside and Dirty Deeds were also racing neck and neck at 15 knots with spinnakers up. These two, with Black Betty and Indian ahead of them, had the best of the wind getting most of the way to the Mandurah turn by reaching in the offshore breeze before it swung to the south for the run home.

Indian made it around Rottnest Island in great time and still in the good southerly the team reached straight in to the Fremantle finish breaking the 2015 record held by Peter Hickson’s TP52, M3 by 16 minutes. Craig Carter and team were delighted with the result and had enjoyed the ideal conditions.

Black Betty’s crew had a fast run to the West End of Rottnest, working hard to make Cape Vlamingh with the boat absolutely flying along. They had the A4 running spinnaker up and the main hardly setting.

Obsession Racing took some great twilight photos as they sailed around Rottnest Island. They commented later that it was not ideal racing conditions for their yacht as they do not get up and planning like some of their competitors but the team thought it was beautiful sailing and a great event.

Between the 40ft racer cruisers Argo and the Farr 395 Giddy Up (Rob and James Halvorsen) were having a great race and had pulled ahead of Ian Clyne’s J122, Joss. They were followed by Barry Walsh’s Twitch, a Beneteau 44.7. Further back, Phantom (Graeme Cole) trailed Farrago (Petrus Vlaar).

In the Double Handed class, Alison Stock and Brad Skeggs on the Northshore 38 Selkie managed to stay ahead of Dart Vader (Jomac 30) with Wayne Pitcher and Richard Spence on-board who followed the team closely all the way to the finish.

As the Double Handed class finished the offshore easterly wind had returned and by the time the S&S 34 Soon arrived at the West End of Rottnest it had set in for the evening and was building in strength. This made it a long slog home for Michael Thorpe and team, beating in to the wind on the return leg from Rottnest Island to the Fremantle finish. They finished at 5:43am completing the course in around 20 hours.

Overall on IRC handicap Black Betty was the winner, ahead of Indian by only 2 minutes. Indian’s owner Craig Carter commented that while it is always disappointing to break a race record and not win overall, it was close racing and Black Betty sailed very well. Great to see the team back racing offshore. Black Betty will continue to race in the local 41st Farrawa Cup Series (RFBYC) while Indian will be on tow across the country later this week to prepare for the Rolex Sydney Hobart Yacht Race. There they will meet up with fellow Royal Freshwater Bay Yacht Club team on Peter Hickson’s TP 52 M3 for the big event.

Third overall in the Roland Smith Ocean Race was Alan Stein’s Dirty Deeds then Chris Higham’s Argo who sailed well to place fourth. A very close finish on corrected time for Weapon of Choice, Giddy Up then Enterprise who finished only seconds apart.