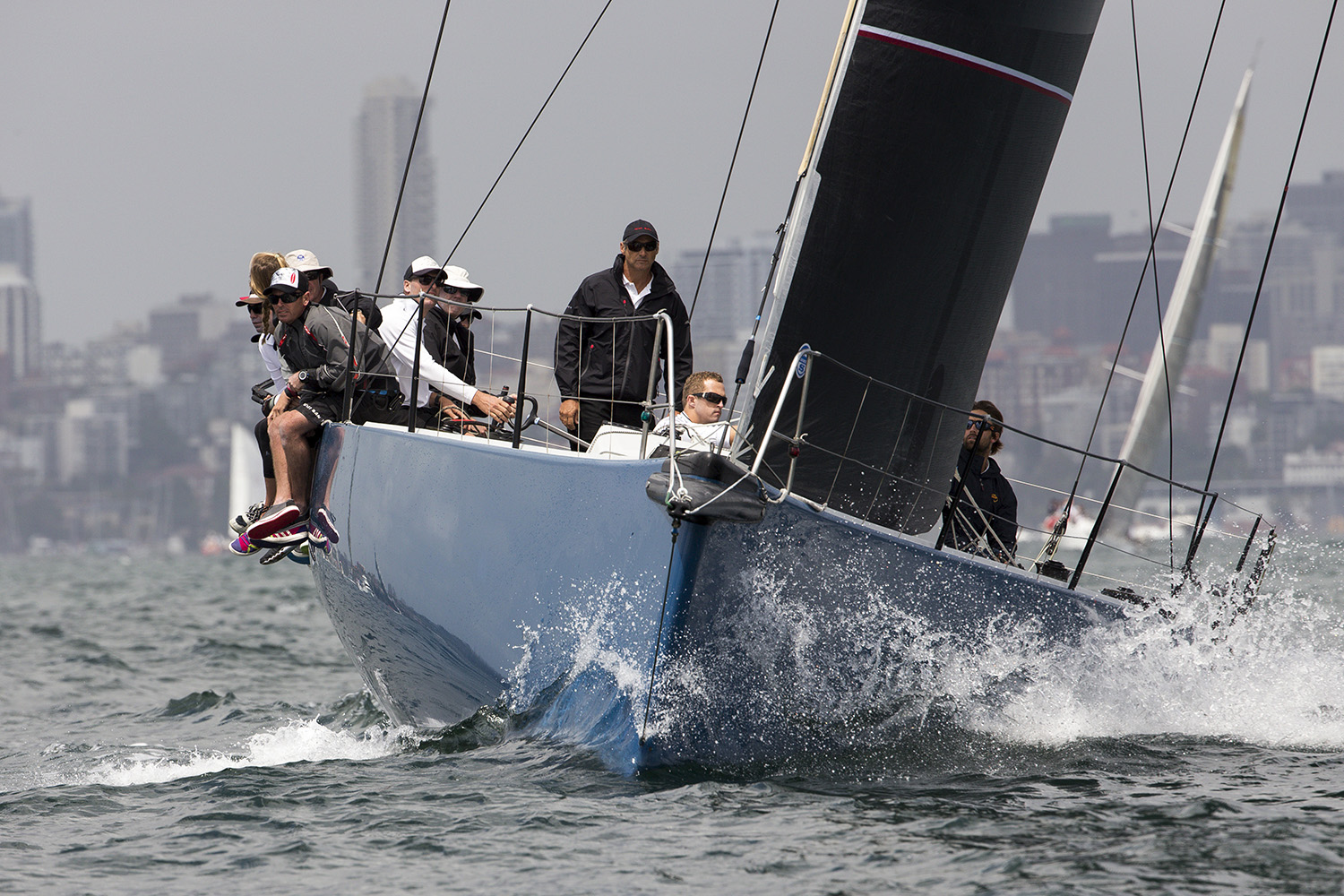 Allen has sent a clear message to his nearest rivals, both TP52’s, along with the rest of the field. Whether it is the TP52 or the Carkeek 60, his crew is in top form and whoever beats them will have to be at their best.

Today’s win on the 27 nautical mile race doesn’t make it any easier for the Yachting Australia president and past CYCA commodore to choose his weapon for Boxing Day, as both yachts are entered in the 628 nautical mile race.

“The weather will be the decider in which boat we take to Hobart,” Allen confirmed this afternoon.

“It was a long day in terms of conditions,” Allen said. “Steering upwind was tough, it was lumpy with lots of chop – leftovers from last night – and then there was current. There were boats coming off waves and skidding off the back of them – there was quite a bit of groundswell. As you sailed further east there was 3 knots of current.

“We had a big advantage on the rest of the fleet, because we have tiller steering and you can use the appropriate amount of rudder. It was still hard though; each wave you had to judge independently – it kept changing,” the Sydney yachtsman added.

“We did a gybe set at top mark, it was nice planing and surfing conditions coming home, but there were 15-20 degree shifts throughout the day, so it was hard to get into mode both upwind and downwind. We had a pleasant to run home after the upwind leg though.”

“It was a real challenge. The sea-state threw us around a lot. But we got a good start and sailed tactically well. About Time (Julian Farren-Price’s Cookson 12, which has won the CYCA’s last five Ocean Pointscores) was at the top mark with us, so we knew were in good shape,” Piggott said.

“We have new sails and are working up for a full season. The crew did a good job and we finished with good speed,” Piggott said, adding the smaller yachts experienced as much as 18-20 knots.

Principal Race Officer, Denis Thompson, said the fleet rolled off cleanly from the Shark Island start. “I set them a course with a mark 12 miles out to sea. It was just over 10 knots at the start,” he said.

Once outside, many said it was the worst conditions they had sailed in for some time, due to the sea state, with winds reaching 17 knots, but generally around 13 knots.

Today’s race also marked a race for the CYCA’s Ocean Pointscore, which was won by About Time, with the Ker 40, Midnight Rambler (Ed Psaltis/Michael Bencsik/Bob Thomas) second and Balance third. About Time also won under PHS with The Goat and Flying Cloud filling out the remaining places.

Racing in the annual CYCA Trophy Series, conducted under IRC, ORCi and PHS, finishes tomorrow, with a passage race. Starting at 11.00am, Denis Thompson will select the course on the day, depending on conditions. Racing is due to start from Shark Island at 11am and finish at Watsons Bay. In the case of heavy weather, Thompson will set a Harbour course.