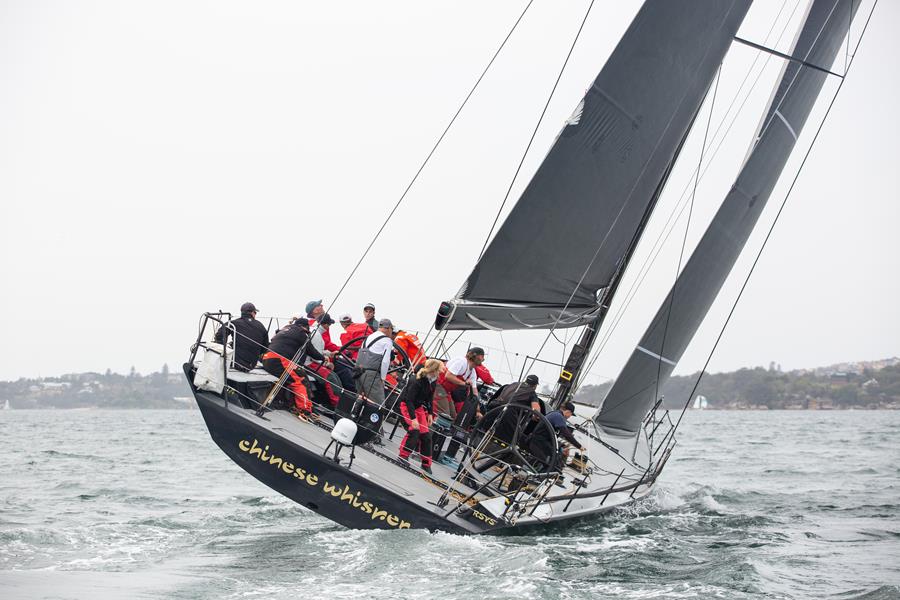 Dave Griffith and Rupert Henry’s Chinese Whisper has taken line honours in the slow-going Newcastle Bass Island Race, while Matt Allen’s Ichi Ban, a nominee for the 2019 World Sailing Boat of the Year (to be announced on 29 October), finished a couple of minutes behind and added yet another overall win to her name.

Chinese Whisper, a Judel-Vrolijk 62, did not have it easy, as TP52 Ichi Ban was on her stern from Bass Island to the finish line.

“Racing was very interesting with difficult conditions. It was all over the place in strength, with torrential rain and then no wind, then great reaching breezes, enabling us to sit at around 14-19 knots,” Griffith commented.
.
“It was sad to see No Limit retire (structural damage), as we were having a great tussle and they were leading at that point, so it must be tough for them. Then we went back and forth with Ichi Ban all the way around.”

Griffiths said conditions were especially tough from Newcastle to Sydney Heads: “The seaway was all over the place. It died as we approached Bass Island, where we rounded ahead of Ichi Ban. We were both then screaming into the finish.”

In the meantime, Ichi Ban is yet to be declared the winner, as boats were still finishing into this morning. However, the results are clear, pending any protests. The top three overall are TP52s. Sam Haynes’ Celestial, which finished nearly an hour behind Ichi Ban, has claimed second overall, with Matt Donald/Chris Townsend’s Gweilo third.

St Jude, the Sydney 47 owned by CYCA Vice Commodore, Noel Cornish, has finished fourth overall, after sitting on top the overall board for part of the race.