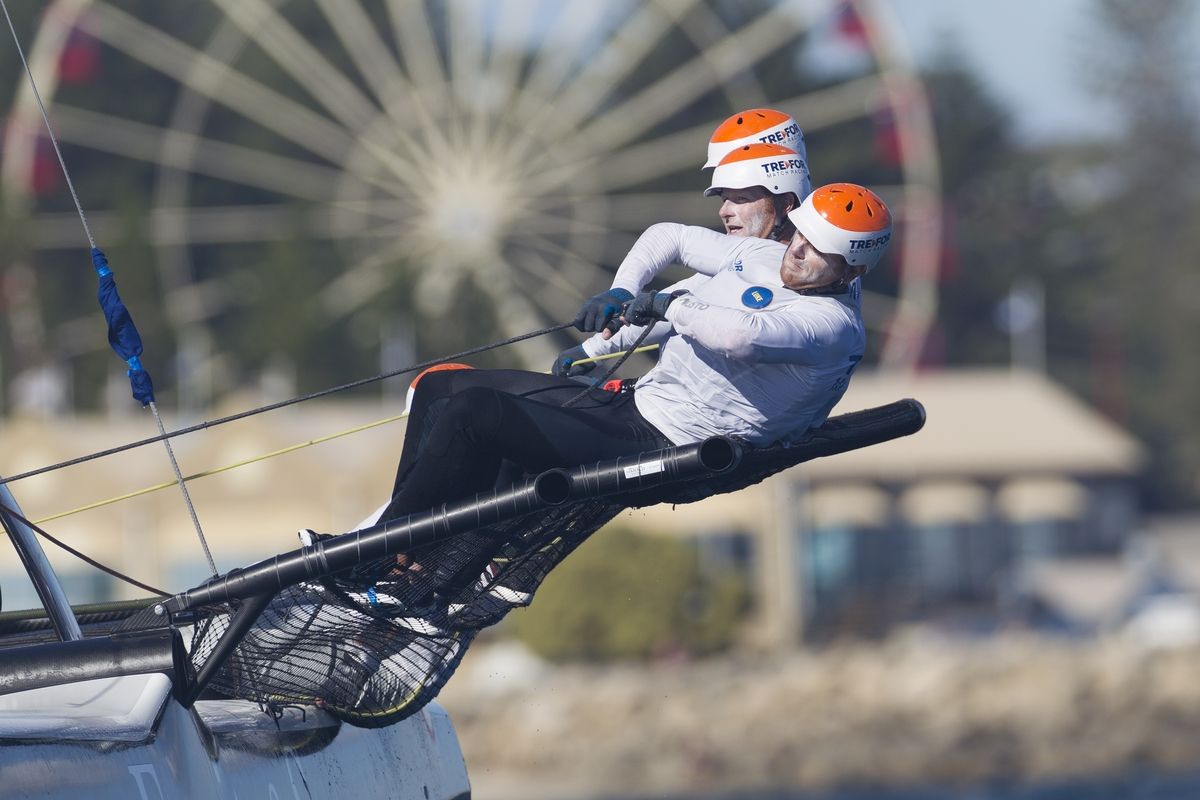 The final day of the inaugural World Match Racing Tour M32 event at Fremantle got underway in a brisk easterly, with flat water.

The first race of the semi-finals featured six times champion Ian Williams (GBR) and Nicolai Sehested (DEN) who had defeated former champion Taylor Canfield in the quarter finals. Williams has done most of his sailing at this regatta in the lighter morning winds and he emphasised the value of that experience by taking control early and putting a penalty on his rival. The easterly was fresher than it had been and Williams delighted in the calm waters to extend his lead at every stage.

This was a rare case where the racing was quite uninteresting. For the most part we have been treated to exciting crosses and high-speed bear-aways with the crew on the edge of losing control.

The second pre-start featured some good old-fashioned dial-ups and shouts of “Up! Up!” before Sehested got away in the dominant position and Williams was unable to get through him. Sehested was first to the top mark but then disaster struck as his genneker refused to furl. It was dropped to the deck but by this time Williams had made up the deficit.

Sehested sailed up the course with the genneker still down and tried to hoist after they turned downwind. But they were halfway to the bottom mark before they had it unfurled and trimmed and by this time Williams was on his way back upwind. It was a comprehensive victory by almost a complete lap and put the champion on match point.

After a poor start by Williams which allowed Sehested to race away to a huge lead, it seemed this match was going to at least one more race. On the first upwind Williams closed the gap but was still 20 seconds behind when the gennaker was unfurled. Then Sehested committed the cardinal sin – under no pressure, he misjudged his bottom mark rounding, the boat teetered on the edge and fell over, automatically incurring a black flag and sending Williams straight to the final.

Williams has been the recipient of lots of luck, usually in the form of unforced errors by his opponents. He has sailed fewer races than any of the other semi-finalists and it will be interesting to see whether this leaves his team fresher for the final, or costs him because of limited sailing in the strong westerlies of the afternoon.

The first race between the second pairing was a much closer affair with Yann Guichard just having a speed edge downwind over the veteran Hans Wallen, while Wallen was quicker upwind. The boats were sailing on opposite sides of the course, coming back together only at the gates but there was tension in the air as the contest ebbed and flowed.

Finally it was Wallen, with a brilliant last tack, who slipped through the top gate and ran down to the finish line to take a 1-0 advantage.

The skippers stayed away from each other at the next pre-start except for a brief attempt by Guichard to luff Wallen. Wallen was able to avoid the battle and was first up to speed but there was little in it as they swept around the reach mark and ran to the bottom gate.

Wallen's superior upwind performance was negated by a wind shift that lifted Guichard and gave him a 15 second lead at the top mark. Then Wallen found extra speed downwind and closed the gap to 10 seconds. But Guichard had the advantage of the favoured northern side. They crossed just a boat length apart. Guichard tacked to cover, threw another one quickly and won by 10 mengths to even the score.

Guichard got the better of the start in the third race, sitting in front of Wallen and accelerating perfectly to the line. He was 10 boat lengths ahead as he rounded the bottom mark and immediately headed north towards the harbour groyne. It was follow-the-leader until halfway up the beat, when Wallen tacked and Guichard covered. A big gust carried the Swede up to the tacking Frenchman and they were side-by-side racing for the gate. Guichard threw his bow at Wallen, who baulked, but they swept through the gate together and split. Guichard went down the middle while Wallen had been forced to the north.

That gave Guichard the better line into the bottom gate and he rounded a few seconds ahead. Again they split, with Guichard going north briefly before coming back on to port tack in the dominant windward position. But it was all to no avail. Tacking to cover, probably unecessarily as it happened, Guichard went into irons and Wallen said “thank you very much”. It gave him more than enough searoom to perform his own final tack and go to a 2-1 lead.

The land breeze was holding up when the fourth race started, which may have ominous implications for the finals – a late land breeze usually means a late Fremantle Doctor and the event has TV commitments around the world. But Wallen and Guichard weren't looking that far ahead as they commenced hostilities.

This was the most aggressive pre-start of the semi-finals series, with Wallen sitting on Guichard's transom and forcing him away from the line. That allowed the Sede to take a big lead around the reach mark and through the bottom gate.

However, a big wind shift just as Wallen tacked on to port  lifted the French boat and coming in on starboard they were able to force Wallen to tack away. A tack in these boats in moderate conditions costs around five boat lengths and Guichard was in front.

The lead changed again at the top mark when Guichard mis-judged his layline and had to do an extra (slow) tack. Wallen inched past and led through the gate by a boat length.

Wallen extended his lead on the run and in desperation Guichard threw an extra gybe and headed to the southern side for the first time. Coming back down from the north, Wallen picked up some nice gusts, crossed comfortably in front and despite a last minute tacking duel raced away to qualify for the final.