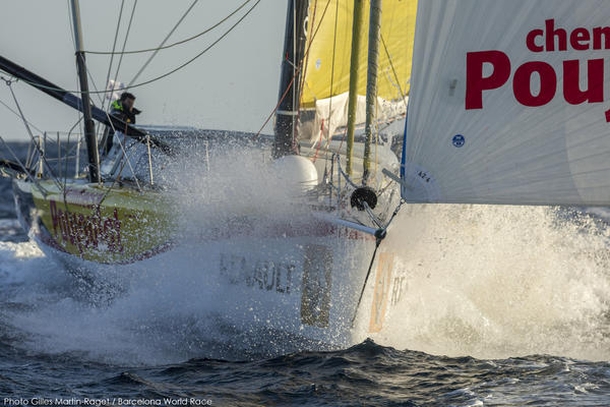 Twenty four hours ago when he and his Spanish co-skipper Pepe Ribes were slowed by light breezes, Alex Thomson joked that patience is one virtue he lacks. The Hugo Boss duo, leaders of the Barcelona World Race by 25 miles this Tuesday afternoon, have made a useful short term gain by passing east, on the windward side of the Canary Islands and so missing any blanketing effect of the high land of the islands. But will their thirst for such an immediate benefit cost them later down the track when they need to get west to cross the Doldrums?

For sure Hugo Boss has been quicker than the second and third placed GAES CentrosAuditivos and Neutrogena which have both been negotiating the passage between Grand Canaria to their west and Lanzarote and Fuerteventura to their east. On the 1400hrs UTC ranking today Hugo Boss were already 50 miles south of the most southerly tip of Fuerteventura and making a steady 15kts. In contrast Anna Corbella and Gérard Marin on GAES Centros Auditivos were slowed to between 8 and 11 knots off the SW of Fuerteventura, almost certainly stalled slightly as they clear the immediate lee of the island.

In turn Neutrogena in third and Cheminées Poujoulat, Bernard Stamm and Jean Le Cam, in fourth were over 40 miles behind Hugo Boss and also two or three knots slower.
“They have made their decision and no doubt we will all have some nervous times waiting for the outcome, but they seemed quite confident.” Said Alex Thomson Racing director Stewart Hosford after speaking to skipper Thomson this morning. “Everything is good with the boat, they are on good form.”

Cheminées Poujoulat skipper Stamm was objective about their losses they sustained after erring too west and being slightly burned by the Azores high pressure’s light winds. With two decades of round the world racing under his belt, Stamm is hardly phased by a deficit of 20 or 30 miles, but he too is not known for his patience, and perhaps it is an early insight that he and co-skipper know that – with a boat which is an older generation than the VPLP-Verdier design that Hu go Boss is – they cannot simply hope to outgun Thomson and Ribes in moderate breeze conditions.

“We thought we’d make it through, but the high came down much more quickly than expected. So we didn’t pull it off. We were hoping for a better angle. There’s some wind now and I think the boats in the front will take advantage of that until the Doldrums. Our losses weren’t dramatic, but there were a few moments when we were a bit worried about it.” Said Swiss skipper Stamm, who for several weeks in the Southern Ocean was Thomson’s nearest rival during the last Vendée Globe solo non stop race around the world.

The trade winds look set to build to 25 knots at times which seems to guarantee a fast passage towards the Equator for the leading group, and in these conditions Hugo Boss might expect to gain steadily as the more powerful boat.
The gap from first to fifth placed Renault Captur – Jorg Riechers and Sébastien Audigane – has increased very slightly again today but the German-French pair can expect that margin to largely stabilise as the trade winds build and move slightly north to them.

But the biggest cause for celebration is left to Nandor Fa and Conrad Colman who were finally on a SW’ly course in the Atlantic, double digit velocity waking up their speedo this afternoon as they broke into a decent northerly breeze. Straitjacketed for days by very light winds in the Alboran Sea and off Gibraltar  they now have a good forecast to crank up Spirit of Hungary steadily to see what the IMOCA 60 that Fa designed himself, is capable off.
Colman laughed today that they had agreed to open one of their three celebratory bottles of Spanish Cava as they passed into the Atlantic. Supposed to be one each for the three Great capes of the course, Good Hope, Leeuwin and Horn, as a Kiwi Colman quipped he would forego the Aussie cape, like Thomson looking for the reward here and now!