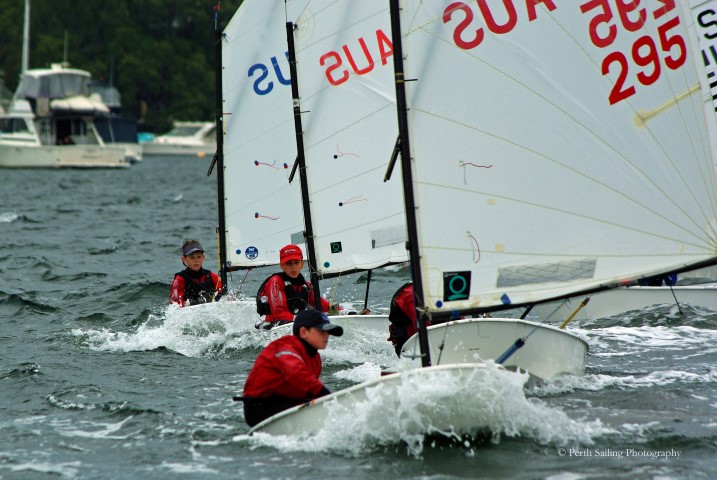 The International Classes Regatta is a great warm up event for the championship season. Hosted by Royal Freshwater Bay Yacht Club, the annual event began in 1989 and has always been held in early December providing a great opportunity for sailors to prepare for upcoming national titles.

The 2015 event was considered a huge success with 225 sailors competing across 14 fleets and around 100 volunteers. When sailors and supporters arrived to the club on Saturday morning they were met with blustery conditions and the coldest December day for Perth in 50 years. That did not stop the ICR from getting underway. Two courses were set in Freshwater Bay and spectators had great viewing from up at the clubhouse on the hill above.

Challenging conditions for day one, the race committee kept a close eye on the sometimes unfavourable weather. The volunteers on-shore worked just as hard to keep the hungry and cold sailors satisfied, they all did a superb job and most classes got at least five races on the board.

In the O’pen BIC Gold fleet, Sam Rose had a great day winning four races. Marcello Torre was consistent in the Optimist Gold division as were father and daughter pair Richard and Matilda Rowell in the Mirror class. In the 29er class Oliver Medd and Braden Higgins tried to stay close to Hayden Hunt and Ben Walsh while some of the others in the fleet just did their best in the testing situation. In the Laser 4.7’s there was a good battle going on between Romë Featherstone and Finn O’dea, both getting some good results on day one. It was great to see the Flying Ants racing for the first time as an invited class to the ICR and as their class name suggests, the boats were flying in the strong winds.

Sunday morning brought warmer temperatures but the wind again provided some challenges for the sailors. The pressure was up and down in strength and there were gains to make in being on the correct side of shifts in direction.

There were 17 sailors in the Optimist and O’pen BIC Bronze fleet. This group was having a great weekend on the water, their course tucked in to the shelter of the bay. This next generation of young racing sailors did very well and enjoyed themselves both on the water and having fun on-shore.

One of the younger sailors, Grace at only 7 years old was practising for the upcoming Optimist Australian Championship in Sydney. She is really looking forward to travelling and meeting new friends at her sailing event where she will participate in green fleet for the beginners. Her older brother was racing in the Optimist Silver group and he was very pleased to win one of the ten races at the ICR. Lachy Owen commented, “It was a bit tiring but I had lots of fun.” He placed third overall and is gaining a lot of enthusiasm for his sport. Thomas Hodge sailed very well and won this division with Max Shannon in second place.

Liam Saunders took over the lead from Sam Rose and won the O’pen BIC Gold overall with Barney Woo in third and Geneveive Hennessy only four points behind. The Rowell’s held on to their lead in the Mirror fleet from another family team, Simon and Tyson Barwood.

Jayden Dalton and Owen Ready had a fairly convincing win in the 420 class as did seasoned Laser sailor Colin Dibb who led Grant Lovelady and David Whait in to the podium placings.

Overall the Torre brothers Marcello and Raffael placed first and second respectively in Optimist Gold and both with four wins. In the Laser class, although Richard Maher won six of their 12 races and placed first overall, James Stewart and Zac Littlewoood kept him on his toes with all three not too far apart on points throughout the regatta. Hayden Hunt and Ben Walsh held on to their narrow overall lead to win in the 29er fleet.

RFBYC’s Rear Commodore Sail, Peter Chalmer was on the support vessels for the event and remarked “what a fantastic and professionally run weekend, a great reflection on the club and it’s ability to run these big events. It certainly could not happen without the efforts of our staff and so many enthusiastic volunteers and parents, they made it all run so smoothly. The sailors were great, especially the kids, all so keen and really good to see.”

Rear Commodore Juniors & Dinghy, Evan Moore was also very pleased with the event and amazed at the number of people who happily volunteered their time over a weekend of unfavourable weather. He also commented, “great to see so many of our members across a spread of classes and age groups participate in the regatta as well as many sailors from other clubs. The ICR is perfect for those preparing for national events this summer, I wish everyone well and look forward to following the news from RFBYC members competing on the east coast using our Clubs social media campaign, #rfbycGoesEast”.

What an ideal lead up to the championship season, not only for the Mirror and Contender classes who will contest their national championships at RFBYC, but also for the may sailors travelling east to events. While the conditions were unusual for Perth, known for its steady sea breezes this time of year, it was fantastic learning for those racing in Sydney and Melbourne. Those sailors may well encounter similar cloud driven, variable and trying conditions.

To view the full list of results go to: http://www.sailingresults.net/site/event/137/default.html

There are some fantastic photos taken by Rick Steuart from Perth Sailing Photography, view the album here http://perthsailingphotography.weebly.com/the-rfbyc-international-classes.html