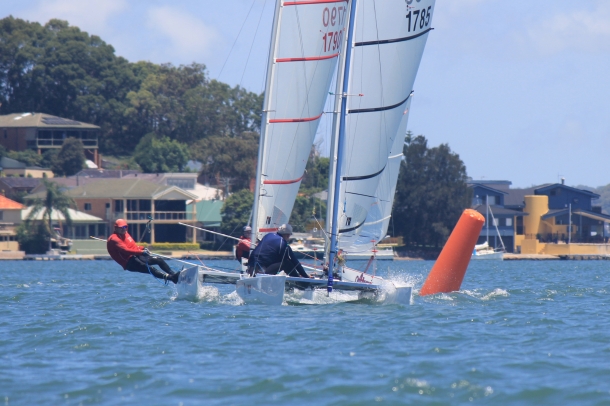 The four states of VIC, SA, NSW and QLD were all represented this year when a total of 29 Mosquitoes came to Speers Point for some near perfect sailing conditions. This was the largest fleet of Mosquitoes seen outside of VIC & SA for almost two decades, and for the first time in the history of the class there were three divisions after the addition of the Spinnaker division.

In the Mk1 division (cat-rigged) Peter Nikitin (Loch Sport, VIC) looked unbeatable while winning both races on the first day. However Mark Pfennig (Lake Bonney, SA) a few places back, just kept improving throughout the week and finished the series by winning four of the last five races to win the title. Regular sloop sailor Warwick Kemp (Adelaide) tried his hand at Mk1 sailing this time and put in a consistent enough series to place 2nd with Garry Johnstone (Lake Boga, VIC) not far behind.

In the Spinnaker division, last year's Mk1 champion Gary Maskiell (Paynesville, VIC) arrived with a new boat that had only been rigged once before the event – but it had been very carefully rigged! Gary very quickly stamped his authority on the spinnaker fleet, and the previous holder of the Spinnaker National title, Daniel Stone (Somers, VIC) didn't manage to break through for a win until the 6th race. This was the only race Gary didn't win until the last day when, after a 3rd place he sat out the last two races nursing a cracked rib (a result of some close-quarter racing with Daniel the day before). Despite Gary's dominance of the fleet Matt Stone (Somers, VIC) was never far away and finished in 2nd only four points behind, while Neil Joiner (Orbost, VIC) improved throughout the series and pipped Daniel for 3rd place by winning the final race.