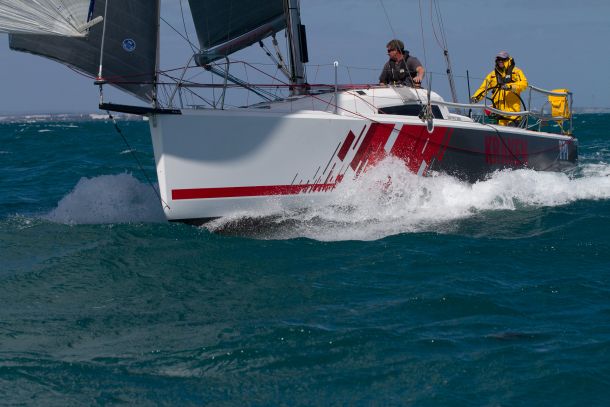 Todd Giraudo and David “Dubbo” White on Kraken were fastest of the double handers and also won under both handicap systems. Photo Bernie Kaaks.

WA’s offshore opener, the George Law Memorial Race, started in southerlies gusting over thirty knots, forcing the race committee to use the heavy weather course to keep the fleet between Garden Island and the mainland.

Peter Hickson’s new acquisition, the TP52 he named M3 (formerly Tony and Astrid Mitchell’s Calm) reveled in the conditions to record fastest time and a resounding IRC win. The yacht clocked 18.9 knots while surfing down the Kwinana deepwater channel. With sail maker Brent Fowler on the helm and the boat’s previous helmsman Andrew Harry standing by as coach, the crew dynamics may have been interesting, but her new owner would have been delighted in the boat’s solid performance in her first outing in his care.

The race sponsor Isabel Ajoulet-Law, the widow of the man the race commemorates, joined the crew on Rob Thomas’ Davidson 50 Finistere, which recorded first place on YAH handicap.

Paul Arns sailed Wasabi into first place on IRC and second on YAH and was the fastest division 2 yacht. Chris Higham would have been well pleased with Argo’s second placing on IRC after the yacht was extensively refurbished last season. A spectacular broach on their way down the channel, with a crew member swinging over the side from a halyard, indicates that they still have some way to go before they can fully master their new yacht, but since it has already been a Siska Cup winner, it has the potential.

Kraken, sailed by Todd Giraudo and David (Dubbo) White was dominant in the double handed division, winning fastest time and both handicap trophies, with Lithium and Cutty Wren filling the minor places.