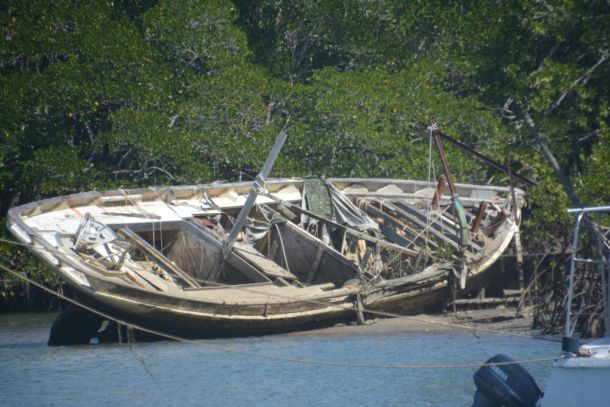 While in Port Douglas for the Mickey Ink Port Douglas Race Week, I spotted this hulk lying on the mudflats opposite the Reef Marina.

Talking with locals, I discovered it is a Torres Strait pearling lugger named Grafton which is owned by a local man, Steve Stonier. He has the spars, engine and other gear on land and fully renovated, but had to tow the hull to the other side of the estuary when new owners at the marina asked that it be moved from the slipway.

A Google search on the name Grafton revealed a listing in the Register of Australian and New Zealand Ships and Boats – http://www.boatregister.net/Grafton.html.

She is 108-years-old and the link on the website included a photograph by cruising guru and contributor to our magazines and website, Alan Lucas. I asked Alan what he knew and he replied: “She was a Torres Strait pearling lugger until around the early 60's, a private buyer developed her into a cruising boat with a large and rather ugly deckhouse. Into the 1970's I lost touch with her and thus can't any further. Sad to see her the way she is, they have such beautiful hulls.”

I tracked Steve Stonier down to his wood-working shed opposite the slipway and was encouraged by what he told me.

“She's safe over there,” he assured me. “We're hoping to get control of the slipway again, then I'll bring her back up and get to work.”

Steve has plans to create a tourist attraction around the restoration, so tourists can walk around the hull and watch the shipwrights at work. He says the planking all needs replacing and he has several options on the wood he's going to use.

He also has all the original decks at his workshop, which he says he'll put through a thickneser to remove 5mm. He will then lay 5mm of plastic plywood under the deck timber to ensure a totally watertight seal.

The politics of the situation between the new marina owners and Steve is complicated and involves all levels of government. I'm not going to get involved in that! But Steve hopes that within a year he'll be able to retrieve Grafton from her resting place, evicting the local crocodile which has taken up residence, and put her back on the hard so full restoration can take place.