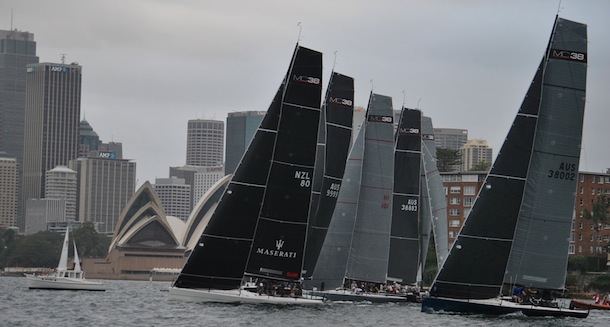 An all-Aussie line up for this weekend’s third ever MC38 Australian Championship ensures the trophy remains with a home-grown crew.

“We are the defending champions. We are expecting strong opposition but we are ready,” a feisty Green warns.

His tactician David Chapman adds, “as defending champs from Hamilton Island last August we have some pressure on us but we also know that we have been here before and won. You can't control everything; the exciting thing about sailing is that anything can happen and there’s no such thing as a safe lead.

“It will be tough to beat the Pittwater boats on their home ground but Leslie is determined,” Chapman continued. Ginger’s one change of crew from last year’s nationals is Will Parker changing places with John Flannery, who went to another boat.

The class President and owner/skipper of Dark Star is very much looking forward to the regatta. “We won the first nationals two years ago and would love to reclaim it on our home waters,” Bacon admitted today.

The national title is a standalone event and separate to the MC38 Australian Season Championship currently underway.

Harken Australia’s managing director Grant Pellew says his company is pleased to be associated with the premium one design grand prix class in Australia. “All boats in the fleet have full Harken fit outs showcasing why Harken is the leader in grand prix racing gear. I personally can’t wait to get down to RPAYC to cook a few snags for the fleet and hear the stories from the day’s racing. Good luck to all the teams.”

Justin and Heidi Lambeth of Lejen Marine, distributors of Highfield RIBs, are donating two umpire RIBs and company director Heidi says, “Lejen Marine’s sponsorship of the MC38 Australian Championship is a logical and complementary collaboration, bringing together two industry leaders. A synergy exists between the MC38 as a high quality race boat and Lejen’s Highfield brand as a high quality chase boat. Both Highfield and McConaghy are engineered to outperform expectations.”

Over the three day 11 race series chief umpire Richard Slater’s eagle eyes will be on all crews who might attempt to flout the racing rules.

Schedule for the 2015 MC38 Australian Championship:

First scheduled warning signal of the day, up to 4 races on Pittwater
Harken BBQ after dock in

First scheduled warning signal of the day, up to 4 races on Pittwater.

First scheduled warning signal of the day, up to 3 races on Pittwater followed by a prize-giving function