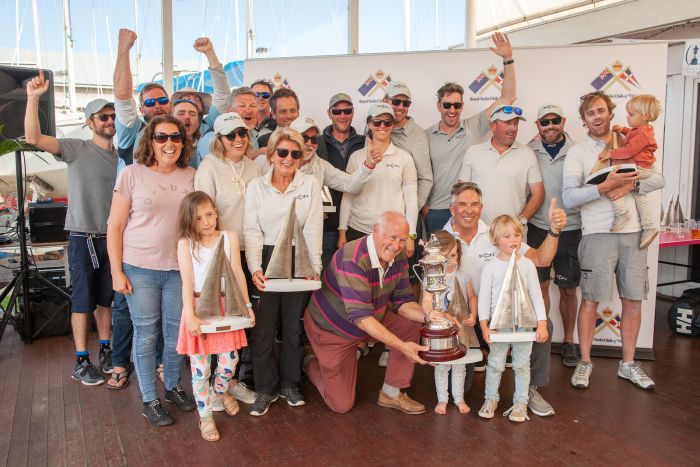 Three Hobsons Bay Yacht Club boats have collectively taken out an emphatic Lipton Cup victory over their cross-town rivals and event hosts the Royal Yacht Club of Victoria (RYCV), after the new teams format was introduced for the first time.

The team was dubbed 'Team Hobbos' and was made up of Bruce McCraken's Beneteau First 45 'Ikon' in Division A, Tim Metherall's Bluebird 'Manjimup' in Division C and Paul Neilson's S80 'Moonraker' in Division D.

Following the announcement of a teams format to compete for the trophy, a total of seven teams were entered from a number of yacht clubs.

A team was also entered that was made up of boats from more than one club, with Sandringham's Rob Date in Scarlet Runner 11 teaming up with RYCV boats Merak and Thirsty Work.

Ikon's Bruce McCraken said he was surprised his team was able to come away with the overall victory, however with his boat and his fellow team members all having great results on the final day's longer race, they were able to clinch the win by three points.

“We did it with a lot of luck to be honest with you. Ikon needs a fair bit of wind and (Saturday) was fluky, we didn't have a lot of wind, but today fell into our lap, big long beats suits our boat,” he said.

“Hobsons Bay Yacht Club do very well for the club that they are, probably a smaller club compared to some of the other clubs around the bay so we were pretty keen to put a couple of good teams together and give ourselves the best chance.”

RYCV's Rear Commodore of Sailing Jane Richards said the new format was designed to encourage more participation and give all divisions of keel boats an opportunity at the major silverware, rather than just the IRC Division A boats.

“It was all about the partnership clubs and having a terrific regatta up here on the top end of the bay and inviting all the other crews to participate,” she said. “We had found that the prior format of IRC division A winning (the trophy) meant there was a very small pool of people that could actually compete for such a prestigious and beautiful trophy.

“In order to open it up to greater competition and participation we thought a teams event would be terrific and I think that what we have done has been fantastic.”

The Lipton Cup Regatta also played host to a plethora of off-the-beach classes with 25 different types of boats entered in the event for Saturday's racing.

Prizes were awarded across a range of classes and divisions, and full results can be found at the Lipton Cup Regatta website.