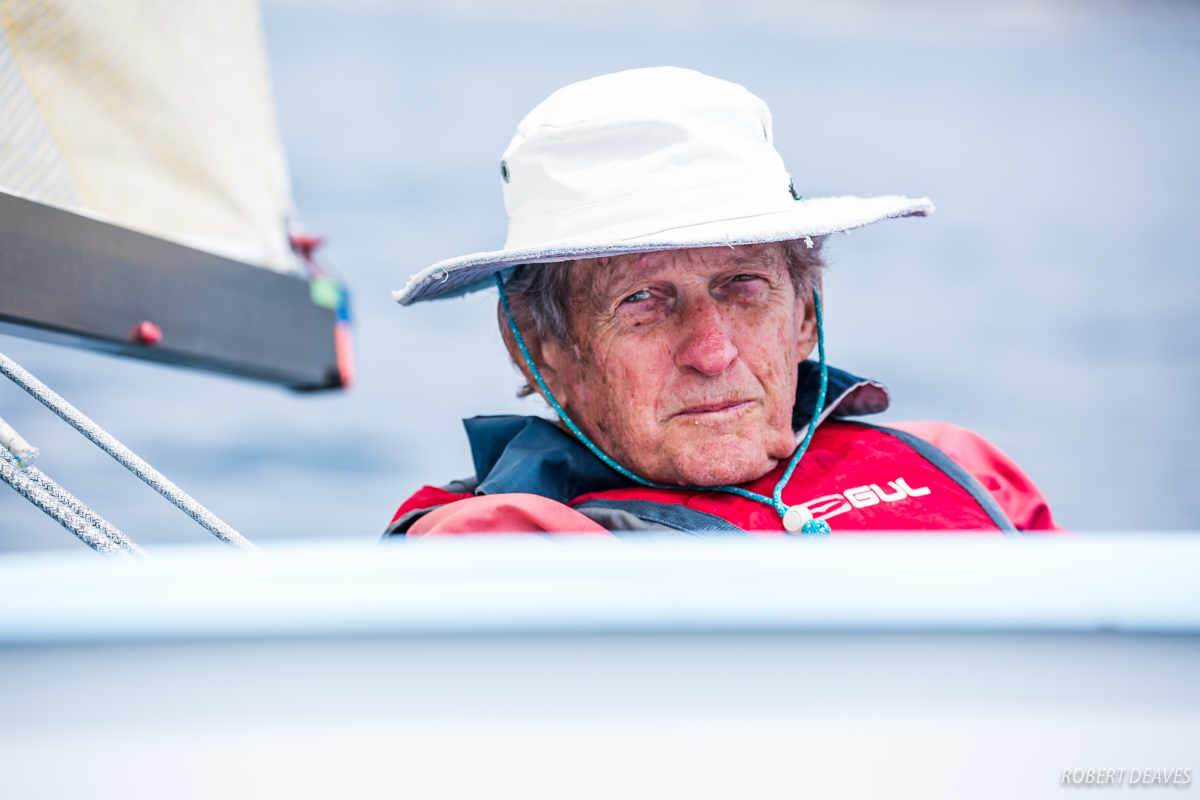 Gus Miller is the oldest competitor at 83

For the second day in a row, lack of wind precluded any racing taking place at the 2018 Finn World Masters at El Balís. The day started cloudy and after a light sea breeze became established early afternoon, hopes were raised, but it did not develop as expected and racing was abandoned for the day before 17.00.

As a result the schedule has been changed with Wednesday’s racing being brought forward to 12.00, and the Annual Masters Meeting postponed until Thursday. Forecasts indicate that Wednesday could bring a more solid sea breeze. Rain and thunderstorms in the interior continue to disrupt the normal thermal generation that produces the sea breeze here.

The day ended with a champagne and strawberry party on the beach, with the daily prizes by Regatta and North Sails again being assigned by a bow number raffle, and beach games, involving beer and champagne. The men’s race was won by Mark Perrow, from New Zealand, while the women’s race was won by Tina Sperl, from Austria, the only women entry in the Finn World Masters.

Everyone is crossing fingers and toes for Wednesday. Four races are required to make a valid series and with a maximum of three races allowed each day, two racing days are needed.

The oldest Finn sailor here is Gus Miller, 83, from the USA. Gus is a class Legend in more ways than one, former Vice President, the creator of the Finn Class clinics, he was also a top level sailor in his time, notably winning a Gold Cup race at the age of 56. He got very close to qualifying for the 1976 Olympics, but it turned out to be the start of a long coaching career.

“I didn’t win our trials, but went as he tune up boat. Then I was asked to coach a Filipino, who had never sailed a Finn, and that really changed my view. And that fall I was asked to do a clinic with at the Naval Academy.”

“The next year the Canadians asked me to do a clinic with Paul Elvstrøm. I went to the pre-Olympics as the acting team leader for the US and there began to get the idea of the International Finn Association having these clinics, and in 1979 we began. We were going to do one before the 1980 Olympics, but the boycott killed that, so 1984 became the first opportunity to do that. And that was the start of the whole thing.”

Racing at El Balís is scheduled to restart at 12.00 Wednesday local time.