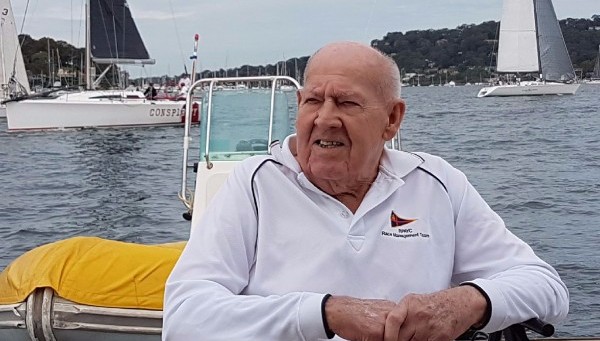 With close to 400 people in attendance, including America’s Cup Skipper, James Spithill, Paralympian Colin Beashel and multiple Americas Cup and World Champions, stories of Jack’s colourful life were in abundance, reflected by all who spoke. From his energy for the continuous modernisation of the club and its facilities, to Tom Spithill’s recollection of their time together on the start boat and Jack’s astonishing sense of humour who never held back on speaking his mind.

Tom said Jack was a great one for statistics, even in his last few weeks was always able to recall sail numbers, owners’ names, as well as an extensive knowledge of the history of boats, and even skippers and crew, who had sailed them. Jack’s sons Robbie and Geoff spoke of their dad’s love of sailing and especially his love of the club, and of course, his favourite drink – the Alfred’s Commodore’s Punch, which was available after the service for all to enjoy.

Having held many differing jobs at the club, Jack became well known for his yacht race management, administrative skills, and pioneering the Barrenjoey Circle race course. He was well known for not only starting and finishing races but laying the days marks and getting back to the club to start pouring the taps for competitors thirst.

An avid sailor himself, he finished runner up in the 1964 Olympic trials aboard the 5.5 “Altair” and sailed onboard “Gretel II” in the 1977 Americas Cup challenger trials. Later radio commentating at the 1983 America’s Cup. He sailed many Montague Island races on a variety of boats, however, inshore one design racing was his first choice.

Jack was employed by the RPAYC from 1956 – 1989 and was made a Life Member of RPAYC in 1994 and in 2014 the club’s training facility was named The Jack Gale Centre, in honour of Jack’s significant contributions to the club and the sport of sailing on Pittwater.

In a fitting tribute to Jack's personality and character, the final song played at the closing of the service was Ray Charles’s – ‘Hit the Road Jack’.

Farewell Jack – fair winds and calm waters – you will be greatly missed and remembered for sharing your generosity of spirit, knowledge and wicked sense of humour.