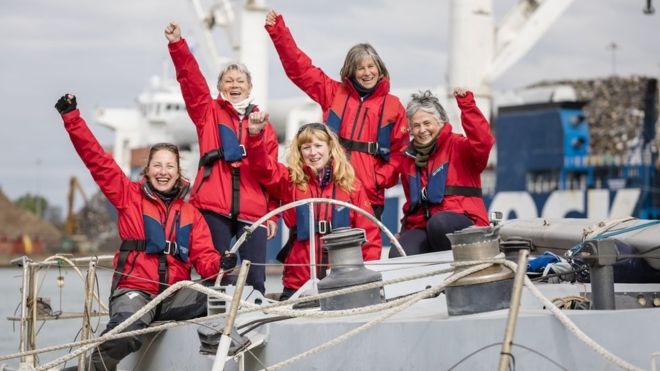 Tracy Edwards MBE and crew reunited with Maiden 27 years after completing the Whitbread Round The World Race in 1989/90 . Photo BBC.

A famous ocean racing yacht has returned home to Southampton 27 years after it carried the first all-female crew around the world.

Maiden made history in 1990 when its female crew, led by Tracy Edwards, became the first to sail the Whitbread Round the World Race. The team won two legs of the race and crossed the finish line second overall.

Following restoration work in Southampton it will embark on a global campaign to promote girls' education.

The 58ft (17m) boat was sold shortly after the race and was recently found in disrepair in Mahé, Seychelles. It arrived on Monday via cargo ship and was brought into Hamble in Hampshire. The yacht is expected to be lifted from the water to begin its refit later.

It is due to set off in August 2018 on “The Maiden Factor”, a global campaign to promote education for girls.

Continue reading about The Maiden Factor and see more images of the boat and crew at the BBC.