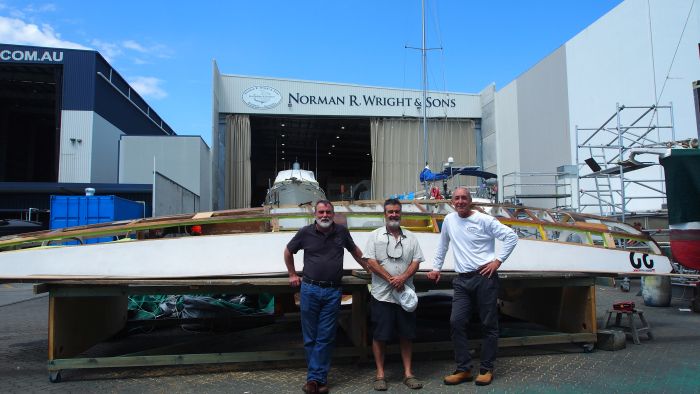 The nifty Jack Holt-designed keelboat, Saltash – eight-time winner of the Brisbane to Gladstone Race – is being given a new lease on life by the craftspeople at Norman R. Wright & Sons, using the latest generation epoxy and carbon fibre products.

Currently upturned in the yard at Norman R. Wright & Sons, dwarfed by the carbon fibre bulk of supermaxi Comanche at the Rivergate complex, the hull and skeletal superstructure of Saltash belie her glorious past and pedigree.

Saltash is a 30ft Yachting World keelboat (which changed to Diamond in the 60s), conceived by prodigious designer, Jack Holt as a simple “build-her-yourself” sailboat aimed at dispelling the perceived elitism around the pastime in those optimistic post-war years.

According to Ian Wright, who grew up playing among the sawdust and tools of his grandfather’s operation at Bulimba on the banks of the Brisbane River, the vessel’s history, achievements and the shared memories of its crews earn it a new lease on life.

Built in 1966, she was bought by the Wrights in 1981 for the princely sum of $2,800, with the intention of enjoying her on Moreton Bay. But fate, and design, had something more in mind for this compact cruiser.

The Diamond was the first keelboat in the world ever designed to plane and as Ian Wright explains “she was a very fast yacht back in the day”.

Following in their father’s footsteps, Ian and his brother Bill converted their open cruising boat to comprise a cabin and cockpit with inboard engine and the safety features to suit Category 3 ocean racing standards. They entered the 1985 Easter classic with the aim of continuing the family tradition.

So stunning were her wins, Saltash was widely referred to as “the freak” for her ability to nimbly pass yachts many times her size.

“We did 20 Gladstone Races, then we decided that was enough and we would have Easter at home.”

Not that Ian has been idle in the time since then. Norman R. Wright & Sons has a proud 110-year history of boat building – commercial, recreational and custom. Renowned for their timber vessels, their craftspeople moved into and mastered fibreglass and more recently, carbon fibre.

“In the 80s, we pioneered several techniques of wrapping timber in layers of different types of glass or carbon fibre,” states Ian. “The advantages are lower maintenance, strength, light weight and impervious to water.”

And now, Saltash is poised to undergo a total overhaul in a labour of love that will see her revived to the pinnacle of her prowess.

“We have a long history with ATL Composites and they’re the first people we consulted when we took on the rebuild,” says Ian. “We want her to be the best quality, to make her as good as she can be, beautiful, and yes, still competitive.”
ATL Composites is supplying WEST SYSTEM epoxy products for bonding, laminating and filleting applications and a lightweight carbon plain weave to laminate the hull to provide strength and stiffness while retaining the light racing weight.

“For over 30 years we have been working with Ian, Bill and the team at Norman R. Wright and Sons,” says Lorraine Murray at ATL Composites. “Such is the synergy, that Ian, Bill, Tony Riek, Dave Kircher, Dave Fussell and Alistair Harvey joined us in Hobart and we co-exhibited at this year’s Australian Wooden Boat Festival in Tasmania, and Dave Kircher gave a practical demonstration using WEST SYSTEM products.

“We have supplied materials for the construction of multiple timber boat projects from medium and large bay cruisers, to repair and maintenance projects, through to commercial pilot boats for the Brisbane City Council, and in more recent years we have collaborated on a multitude of composite projects, like the recently launched Aura, a 60ft Sportfisher designed in-house by Bill Wright.

“We are certainly proud to have a hand in restoring Saltash and can’t wait to see her back in the water and racing, or cruising, again.”