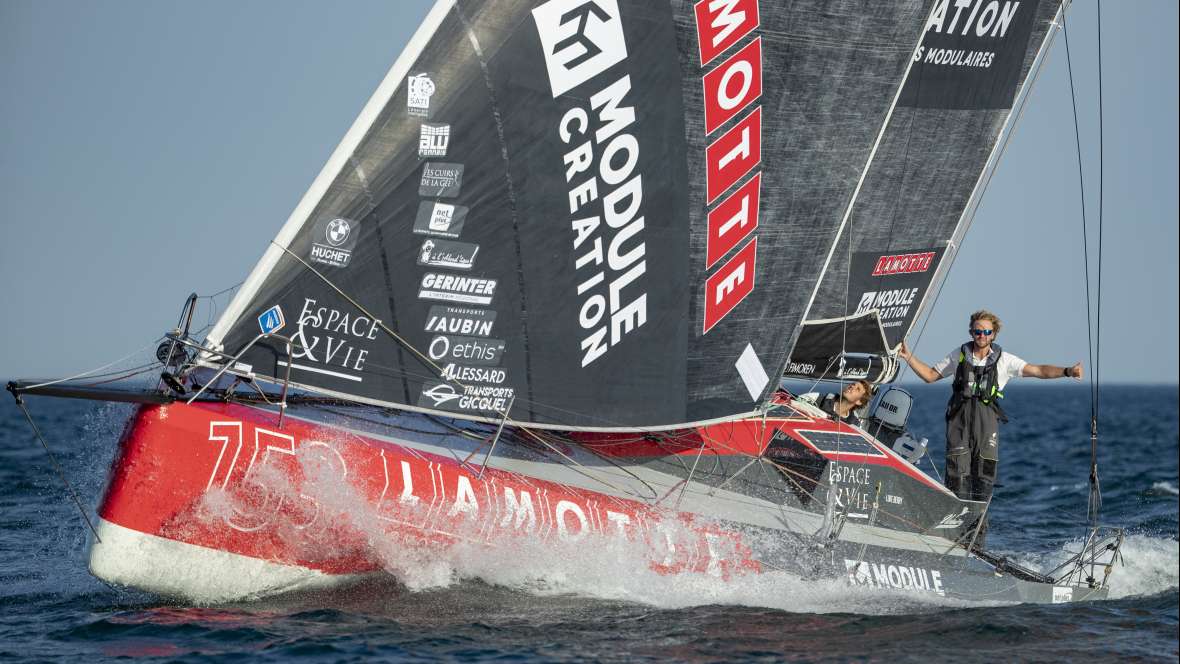 Hopes of a British victory in the Transat Jacques Vabre Normandie Le Havre were dealt a cruel blow before sunrise on Monday morning when overnight leaders Luke Berry and his French co-skipper Tanguy Le Turquais suffered a dismast to their 40ft monohull, Lamotte – Module Creation.

Both skippers are safe and shepherded their boat to Roscoff, on the north coast of Brittany, where they arrived at 16:00 (French time).

The incident came just 18 hours after the start yesterday at 13:15 (French time) from Le Havre in what appeared not to be boat-breaking conditions.

“Around 07:00 (French time), before sunrise, we were downwind in an easterly wind under medium spinnaker with two reefs, we were not overloaded, and we were in manageable conditions,” the 33-year-old Berry said. “We pitched a few times before the last one…I was in the bunk, Tanguy (Le Turquais, co-skipper, 30) was at the helm. We don’t understand it, the conditions weren’t terrible. We recovered everything, we left nothing in the sea, the top of the mast went, then it broke in half. We managed to get everything back in the boat. We’re on our way to Roscoff. We ‘re really disappointed for everyone (involved in the project) especially since we were in the lead at that time.”

Like most of the 118 skippers, Berry had an emotional send off from the pontoons, saying goodbye to his wife Camille and their two and a half-year-old son, Charlie and six-month-old daughter, Lou. If racing is one test of sailing, good seamanship in a crisis is another and Berry and Le Turquais showed their mettle and craft by keeping their project alive and getting the whole boat to safety.

British hopes in the Class40 now rest solely on the shoulders of Sam Goodchild and his French co-skipper, Fabien Delahaye, on Leyton, who were leading at the 15:00 (UTC) ranking.

In the IMOCA60, Charal (Jérémie Beyou / Christopher Pratt – both France), the pre-race favourites, have been flexing their foils in muscly reaching conditions, flying from the tip of Brittany across the Bay of Biscay at up to 28 knots. Fast, but just a stretch for these new beasts.

Britain’s Samantha Davies with French co-skipper, Paul Meilhat on older but upgraded Initiatives-Cœur. was in second, less than seven miles behind,

It was a strategy forecast at the start and may yet divide the fleet. The wind shifted south in the afternoon and the speeds dropped.

There are two low-pressure systems to the west of the fleet that are trying to negotiate. The leading boats will cross the first depression tonight. Ahead of them is the decision of whether to head further south towards the second depression currently over the Azores or dive south to get into the trade winds sooner.

No matter the conditions, the start to this biannual double-handed race, the longest and toughest transatlantic in the sailing calendar, is always a test of man and machine. As all the skippers say, training is one thing, but there is no substitute for a race. Several boats have had problems.

All the news and skippers’ quotes

Advens for Cybersecurity (Thomas Ruyant and Antoine Koch), one of the five latest generation foiling IMOCA, had to make a short pit-stop in Cherbourg before midnight last night. Under race rules they have to stay there four hours.

French skippers Maxime Sorel and Guillaume Le Brec arrived in Brest at 13:00 UTC after noticing a significant technical problem with the port outrigger* shroud on V and B – Mayenne

German skipper, Isabelle Joschke and French co-skipper Morgan Lagravière on MACSFhave diverted back to Brest to fix damage to their keel.

Ari Huusela, who is hoping to become the first Finn and Scandinavian skipper to finish the race, with his Irish co-skipper, Michael Ferguson, discovered a small hole in his mainsail on Ariel II. They have diverted south to take it down and repair in less wind. It was not the way Huusela, a pilot for Finnair, wanted to celebrate his 57thbirthday, although the surprise birthday cake from his wife, that Ferguson unpacked, went some way to making up for it.

William Mathelin Moreaux has injured his shoulder and he and co-skipper Marc Guillemot on Beijafloreare diverting to the nearest port.

Hiroshi Kitada and co-skipper Takeshi Hara, on KIHO reported that they had “exploded” their vital mediumweight spinnaker, in 30-knot south-easterlies and that it is unfixable.

After suffering several setbacks during the first night of racing; including the loss of the big spinnaker, a defective medium spinnaker, and computer problems meaning they could not read weather data, the French crew of the Class40 SOS Méditerranée, Pascal Fravalo and Guillaume Goumy, believe that crossing the Atlantic in these circumstances would not be wise or safe and have therefore made the decision to abandon.

Currently the boat is heading towards Lorient.