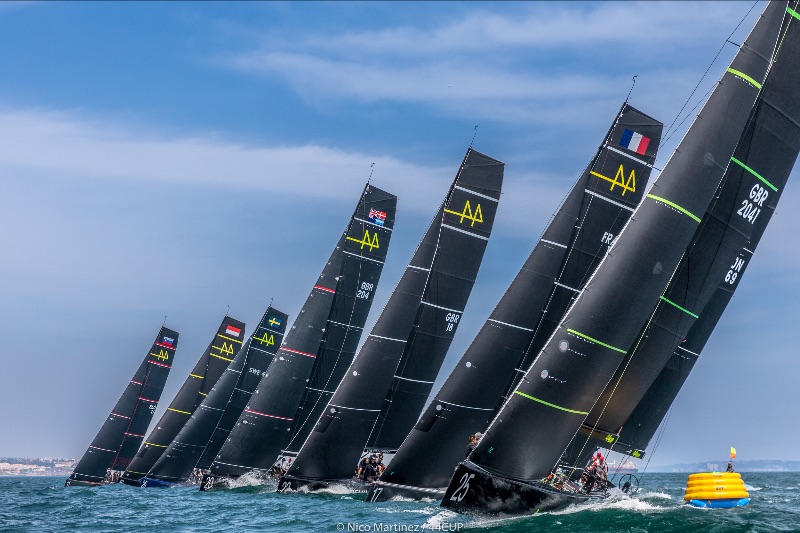 Lining up for another day of racing - Martinez Studio pic

Portugal: On the opening day of the 44Cup Cascais we saw the rare occurrence of one boat – Nico Poons’ Charisma – winning all three races, but on Day 2, it was back to the 44Cup ‘norm’ with lead changes and three different winners.

Charisma performed consistently enough to maintain her lead at the halfway stage, with a four-point advantage over Igor Lah’s Ceeref powered by Hrastnik 1860, today’s overall winner. This with an 11th hour tactician change with British two-time 470 world champion, Nic Asher, flying in to stand in for Adrian Stead.

With Chris Bake at the helm of Team Aqua, the 2021 44Cup champions won today’s first race ahead of Ceeref and Torbjörn Törnquist’s Artemis Racing.

The 10-knot north-westerly was marginally lighter than yesterday, with in a diminishing north-going tide. Nika, Aleph and the newbies on Black Star Sailing Team banged the right hardest out of the start, but Team Aqua was first around the top mark and extended from there.

Race 2 took place in near identical conditions. At the top mark Charisma was back on form, leading at the top mark, but with Teams Aleph and Nika, once again joined at the hip, on her transom.

On the run, Aleph and Nika benefitted from holding longer on starboard gybe, but Nika managed to lay the favoured starboard gate mark perfectly to take a slender lead. She was then just able to nose ahead of her rivals at the second top mark rounding and hang on to the finish.

“It was nice to finally win one,” admitted Team Nika’s tactician, Francesco Bruni after they had struggled yesterday.

“It was a very intense race because Aleph and Charisma were very close the whole race. The key moment was when we managed to lay the starboard gate and defend our small lead. Aleph was still very close on the second upwind, but at the top we managed to stretch a couple of lengths.

“Today there was less bias on the line and Maria (Torrijo – PRO) did a very good job with setting up the course so that which side to go wasn’t an easy call.”

The breeze had built marginally to 13 knots for Race 3. Christian Zuerrer’s Black Star Sailing Team enjoyed their ‘fifteen minutes of fame’ leading out to the right on the first upwind.

However, in the congestion coming into the top mark it was Ceeref that wriggled ahead, rounding with John Bassadone’s Peninsula Racing outside her. The Slovenian team played the shifts to perfection on the run to hold a comfortable lead at the gate which she never relinquished.

Ceeref’s Nic Asher arrived in Cascais having only left home in the UK at 0200 this morning. Of their winning race he said: “The line was squarer and the wind was furthest right, so we felt that the (committee) boat was the right place (on the line) to be, so we came around the fleet.

“We’re pretty fast downwind, so we extended and then the next lap was pretty straightforward,” ended Asher, who is fairly new to the RC44, but did call tactics for Team Pericolosa in Lanzarote in February.

On what was a high scoring day for all teams, Ceeref put the fewest points on the board. Igor Lah was pleased: “It was great today with our replacement tactician – everything was fine. Nic has the same dialect s Ado (Stead) which was helpful.”

While Charisma hangs on to second at this half way stage of the 44Cup Cascais, Ceeref has reduced its second placed deficit to four points, five ahead of Aleph Racing, on which Farr 40 World Champion Alex Roepers is standing in here for owner Hugues Lepic.

For Christian Zuerrer, owner-driver of the new 44Cup Black Star Sailing Team, the learning curve remains steep: “Today was great fun – a good day with enjoyable racing. Every day is a step-up for us, in fact every race,” he said.

“Today we had some small issues with a hole in a kite. In our debriefing yesterday, we were talking about our downwinds and they were better today. In this area, everyone has the same speed, so it’s nice to be in the pack, as the closer sailing gives you more confidence so you can slowly get more aggressive in the manoeuvres.”

Racing resumes tomorrow at 1200 and concludes on Sunday. Follow the live tracking at: http://www.44Cup.org