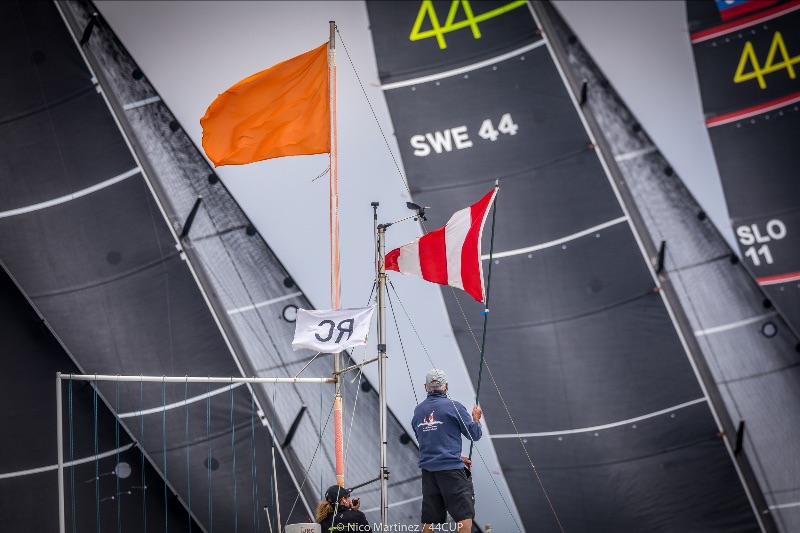 Portugal: After two days of sun, Atlantic swell and prevailing north westerlies, conditions turned around for day three of the 44Cup Cascais, as overnight the wind veered into the south and in the morning the eight RC44 teams waited ashore for an extra hour and half while the wind filled in.

Out on the race track, tacticians faced the perplexing scenario of the breeze from the new southerly direction, combined with, on the upwinds, more than a knot of current against them, but still with the residual Atlantic swell from the northwest with them.

Despite the about-turn of the race track, hard right again was favoured. In the sub-10 knot conditions, it was Nico Poons’ overall leader, Charisma, Chris Bake’s Team Aqua and Hugues Lepic’s Aleph Racing that went all the way to the starboard layline before tacking.

Port tackers, Ceeref powered by Hrastnik 1860, Team Nika and Artemis Racing picked up at the top of the beat, but thanks to a good layline call into the top mark, all had to duck Aleph Racing coming across with rights on starboard.

After going the wrong way up the first beat, Charisma gybed early on the run. Finding better pressure, she was propelled from seventh to second and was able to follow Aleph around the starboard gate mark and out to the right. Both played the shifts well up the second beat and gained separation from third placed with Ceeref, which they held to the finish.

“We wanted the right,” recounted Team Aleph tactician Michele Ivaldi of their winning race. “We had a good start in the upper part of the line. The first two boats went off (right). We waited another minute and then we went all the way too. Then we got a nice righty going into the mark. It was lucky we were on the layline so we didn’t have to do an extra tack.”

According to Ivaldi, the contrary current and Atlantic swell made it difficult to helm: “There was more wind at the top of the swell and less at the bottom so getting it stable was key.”

Fortunately, Team Aleph helmsman and former Rolex Farr 40 world champion, Alex Roepers, who is standing in for Hugues Lepic, did a sound job.

Roepers is enjoying his first time steering an RC44. “The experience is incredibly good. It is amazing how fast they can sail in light air but we’ve had some very high breeze for the first couple of days and it is unbelievable to work these machines downwind,” he said.

“It was a bit of a learning curve for me to get the gybes right, but the Aleph team is top notch. I am very lucky and honoured to be a guest helmsman. My compliments to the RC44 management and the owners for a great class.”

In a short delay the wind dropped and the fleet returned for a second race in continuing light conditions.

Charisma and Ceeref went hard right out of the start, but then on a long starboard tack across the course, they managed to cross ahead of the entire fleet.

Charisma rounded the top mark first, with John Bassadone’s Peninsula Racing into second, ahead of Ceeref. The lead boats gybed early heading out to the favoured right, especially favoured thanks to a wind shift to the right. The lead trio remained the same to the finish but with Ceeref edging past Peninsula Racing on the second upwind.

Going into the final day, dominant Charisma recovered the six point lead she had after her exceptional opening day when she scored straight bullets

With three races scheduled tomorrow in further south or south-west winds, tactician Hamish Pepper reminded all, “Any time you are leading a regatta in this fleet you are obviously sailing very well/. We’re just happy we’re in front, but it is still pretty close. Six points – you can lose that in one race and in this fleet that can easily happen and has happened in the past.”

Team Aqua lies in fourth place, having had what skipper Chris Bake described as a “truly average day for us. It was difficult – very different to yesterday, different wind direction and you had a cross current under the sea state, which created a strange motion on the boat. But it seemed to go okay.”

“It was good to get a decent result,” Bassadone said. “We are generally quite disappointed though, because the boat is going well and it is a combination of bad luck and a couple of boat handling things. It is good to at least to have half a smile on our faces after that race today.”

Racing continues tomorrow at 1200. Follow the live tracking at www.44Cup.org