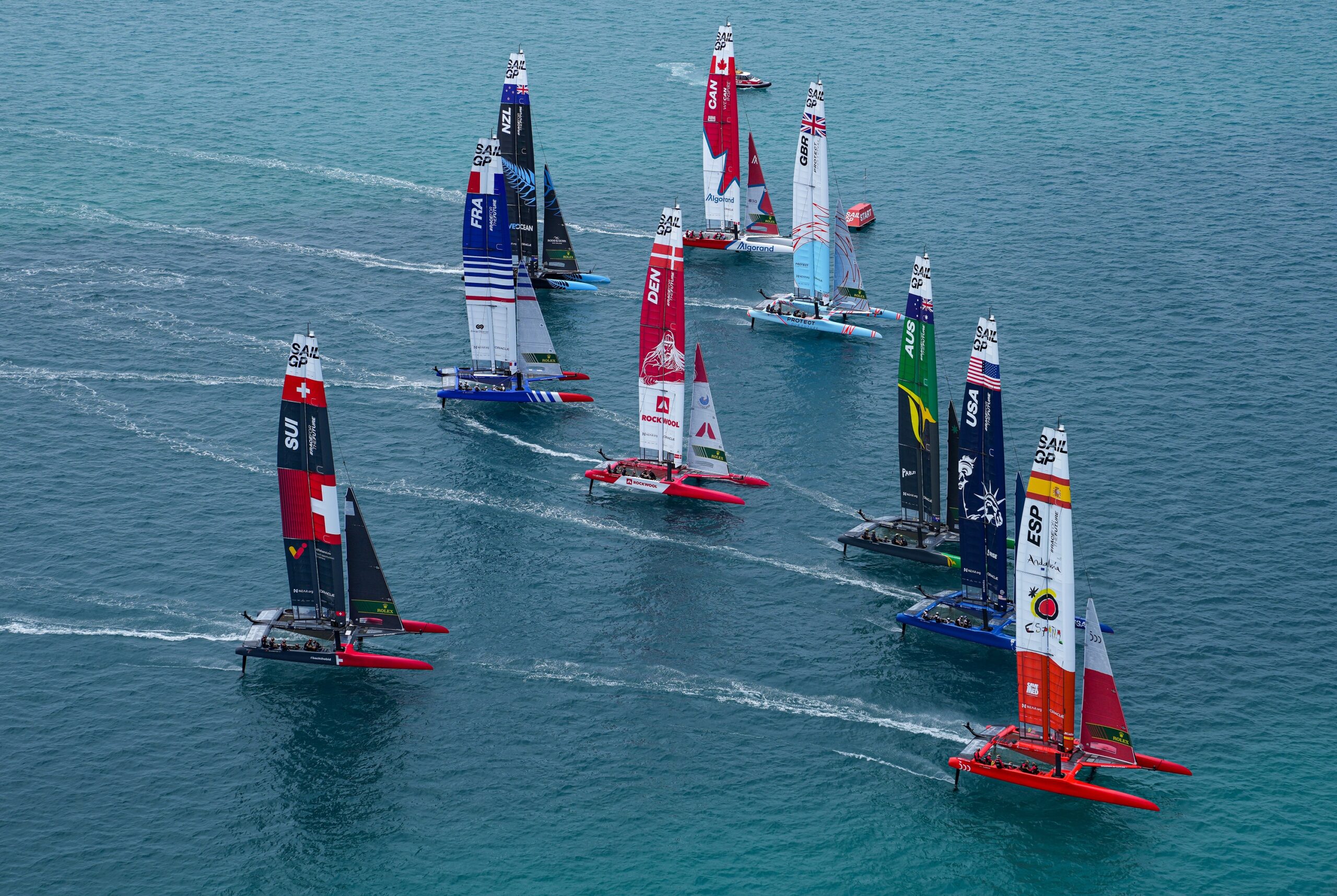 The fleet on Day 1 in Bermuda - SailGP pic

Hamilton, Bermuda: Tom Slingsby’s Australian crew has finished the first day of racing in Bermuda in third place, despite the team’s mixed performance, while newcomer, Canada, has taken a surprise lead.

The battle between the world’s top sailors erupted on the Great Sound, with the nine national teams, including newcomers Switzerland and Canada, going head to head in their identical, 2,400kg supercharged catamarans in light air conditions.

The day presented its challenges for the reigning champions on Team Australia, with the added pressure of nine F50s now crowding the course.

Commenting on the racing, Tom Slingsby said: “We saw today that with so many boats on the course you are going to get punished for mistakes. I’d say consistency was hard to come by today and we saw it with the mixed results from even the top teams like Great Britain.”

The Australian’s struggled to start in a dominant position on the start line of the three fleet races, with the errors forcing the team to the back of the pack.

“It could have been a disastrous day, but we managed to finish up third overall. We were a long way behind at times, but were able to claw our way back and overtake boats right near the finish,” Slingsby said.

“I’m not happy with my starts, so I need to do a lot better tomorrow, but as a team we are happy that we fought back well.”

Perhaps an even bigger surprise for the day was the Canada team’s dominant performance in their first day of racing. Under the guidance of driver Phil Roberston, the new side was able to remain at the top of the fleet during racing. They secured a seat ahead of Great Britain and Australia at the top of the leaderboard going into the second day of racing.

“Being onboard during racing and knowing that my family was watching back home in Australia was pretty special. There were a few big takeaways from racing today, like the importance of rounding marks in the clean air and speed that we can take into the next day of racing,” Bryant commented.

Slingsby and his crew will now turn their sights to race day two, in which all nine teams will compete in two fleet races before the top three teams compete in a final podium race.

Teams will compete for two trophies in SailGP, with the second season of the Impact League, SailGP’s second podium for the planet, also starting in Bermuda.

The Impact League tracks the positive actions the teams make to reduce their overall carbon footprint and help accelerate inclusivity in sailing. New Zealand was the first winner in Season 2 and driver, Peter Burling, is aiming for his team to defend its title as well as targeting a podium finish in the overall championship.